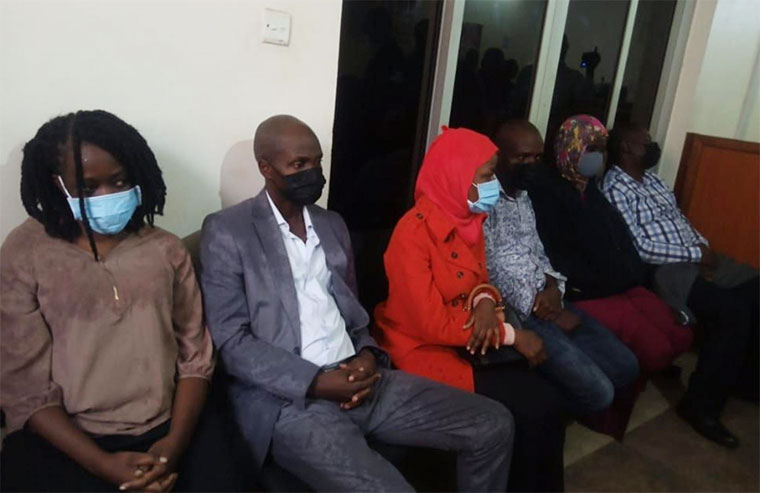 Some of the suspects at court

At least six people including three bankers and two lawyers have been remanded by the Anti-Corruption court in Kampala for conspiring to defraud Tropical Bank Limited of Shs 2.1 billion.

The suspects appeared before chief magistrate Joan Aciro on Tuesday who read for them three counts of causing financial loss and conspiracy to defraud Tropical through irregular payment to a businessman and law firms in a bogus land transaction.

Court heard that the suspects, together with others still at large on July 22, 2021, and July 26, 2022, while at the Tropical bank, Kawempe branch in Kampala city, irregularly processed payment of Shs 900 million to Imran Advocates and Solicitors for the purpose of the land comprised in Bulemezi Block 886 plot 2 at Mukono.

It is also alleged that on July 30, 2021, the accused persons irregularly processed a payment of Shs 585 million to Nsubuga KS and Company Advocates for the purpose of land comprised of Namande Block 68 plot 43 in Mityana district.

The prosecution also told the court that the accused persons further processed payment of Shs 642.5 million for businessman Muhammed Kembere on August 4, 2021, and August 9, 2022. According to the prosecution, the said transactions were conducted in disregard of the proper bank procedures and payment processes.

The suspects pleaded not guilty to the charges and were remanded to Luzira prison until September 14, 2022, when they will return to apply for bail. Sources told our reporter that the monies were illegally deducted from the account of Charles Kodo, a customer of Tropical bank. This is not the first group of suspects being charged before the Anti-Corruption court in relation to fraud in Tropical bank.

In December 2021, seven other suspects from the bank appeared before the same court in relation to more than Shs 1 billion they irregularly paid to Margret Nabbona as an administrator of the estate of Abdurezzagh Elmrabet, a Libyan national and the holder of the defrauded account.

In a related development, the Anti-Corruption court has also charged Patrick Nyeko, the sector manager for the National Forestry Authority (NFA) in Kaabong district with abuse of office and granted him a cash bail of Shs 1.5 million.

It is alleged that between May and June 2015, while performing his duties as a forest officer, Nyeko knowingly flouted the Northern Uganda Social Action Fund-2 guidelines and misused Shs 3.1 million that was meant for the purchase of assorted farm tools for 51 sub-projects in Kaabong district.

Prosecutors argued that his actions were arbitrary and prejudicial to the interest of the government. State attorney Mikka Luteete, who is handling Nyeko’s case said investigations are incomplete. The court adjourned the matter to October 4, 2022.

Without doubts, including our State House; how many wives/husbands and/or children can be sure that whatever is being used or consumed in the house is not from stolen money?
Report to administrator