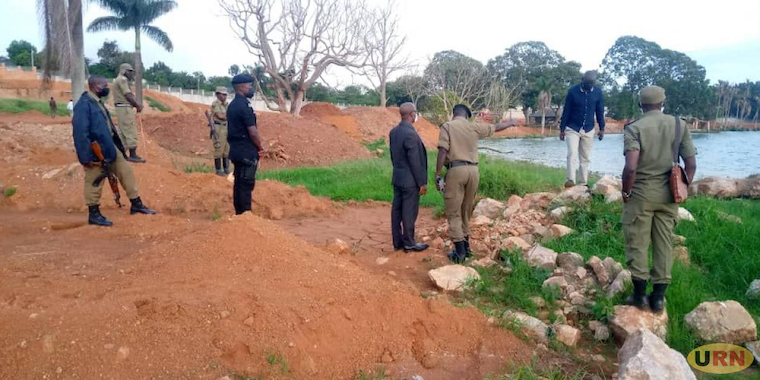 NEMA officials during a field inspection in Entebbe

With the recent environmental disasters in Kasese and Elgon regions that have largely been blamed on human causes, MPs have now called for punitive measures against government officials who issue illegal land titles in wetlands.

More than 30 people were lost to flash floods in the Elgon region a few weeks ago, while another 16 were lost last week due to mudslides. Many blamed the unabated destruction of the water catchment areas on mountain slopes for the disasters.

The parliamentary climate change committee chairperson Lawrence Biyika Songa says it was high time the government invested in disaster preventive measures as opposed to disaster management which even in most cases, it falls short. For example, in addition to the emergency and relief response, families of the Kasese mudslides were given Shs 5 million each as compensation, but many were heard complaining that the money was too little for them to restart a new life after such a disaster.

"Most of the time, what we spend on the Office of the Prime Minister is for addressing challenges after disasters, if you calculate the money we spend on relief items, it is higher than the money we will have used to prevent it," said Songa.

Lately, the government through the National Environment Management Authority (NEMA) has embarked on an evacuation campaign against people who have encroached on wetlands - demolishing schools, homes and other businesses.

The MPs however say, the evacuation campaign appears to only be targeting what they called 'small fish' encroachers ignoring the bigger encroachers like businessmen Sudhir Ruparelia, Omar Mandela, Ephraim Ntaganda who constructed factories, warehouses and hotels in wetlands yet their projects compromise and cause the most environmental damage.

Mbale City North Division MP Seth Wambede says as wetland occupants continue to be penalized, those who issue land titles to them should also feel the burden by either getting arrested or fired from work.

"I think we should not go for only those who built in wetlands, we have to go for those who issue land titles in the wetlands, whoever issues documentation to facilitate land acquisition in wetlands must be fired," Wambede said.

0 #1 kabayekka 2022-09-15 01:41
But the Katikkiro of Buganda has been on record to encourage settled citizens to pay administration fees and acquire land titles on any land in Buganda Kingdom.

The major slogan that was well used for has always been Chappa Mungalo.
Report to administrator