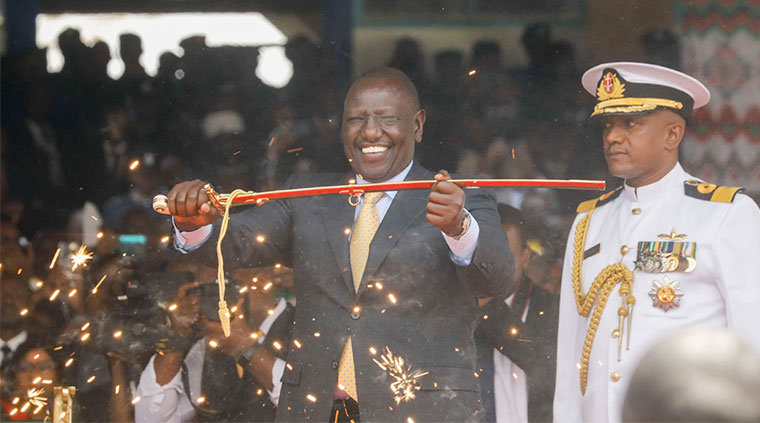 Kenya's new president, William Ruto, was sworn in today Tuesday after a tightly contested election and a narrow win against his rival, Raila Odinga, who declined to attend the inauguration.

Tens of thousands of Kenyans and at least 20 heads of state gathered at Moi International Sports Centre in Nairobi to witness the ceremony. Many people tried to force their way into the stadium, and Kenya's Red Cross communications manager Peter Abwao said first responders treated about 40 people with minor injuries.

“There were those who tried to jump over the fence and then some fell. Some sustained cuts," Abwao said. "There were no major injuries as such, and they have been given first aid. Our teams are on the ground in case of anything, but the situation is calm.”

Ruto takes the reins of power from outgoing President Uhuru Kenyatta, his former boss. As deputy president, Ruto fell out with Kenyatta, who supported Odinga in last month’s election.

Odinga lost with 6.9 million votes to Ruto’s 7.1 million in an election marked by low voter turnout, a split election commission, and allegations of fraud by Odinga. Despite supporting Odinga, Kenyatta welcomed the incoming president with a tour of State House, the Kenyan president’s official residence.

Ruto and his deputy Gachagua Rigathi took the oath on a copy of Kenya‘s constitution, administered by the chief registrar of the Judiciary Anne Amadi, in the presence of chief justice Martha Koome.

The swearing-in and inauguration started with the entry of President Uhuru Kenyatta aboard the commander-in-chief's ceremonial vehicle. Kenyatta then inspected a full parade mounted by the Kenya Defense Forces.

The 60,000-seat stadium was full by five in the morning, with Ruto's fans decked out in yellow and green attire, the colours of his party. Many of these were filmed performing dances and waving miniature flags of their country while a band played music from the stands.

Accompanied by his wife Racheal Ruto, President Ruto came from the official deputy president residence in Karen and arrived at Kasarani stadium towards midday where he was welcomed by his deputy Gachagua Rigathi who had arrived a few minutes earlier amidst cheering from the stands.

In his speech, Uganda President Yoweri Museveni said he has not read Ruto's manifesto but knows he will deliver because he's always frank.

0 #1 Mubiru 2022-09-13 19:50
Kenya is legally, morally and justifiably entitled to lecture all African countries on how to hand over peacefully with the use of a single bullets although Tanzania is not as despotic as other Africans.

Kenya's Vice President's address was a master piece and lecture full of intelligence and political acumen which the Dictators of Africa terribly luck.

May God Bless Kenya in line with Ruto proclamation that it was only God Who enabled him to win the Presidency despite the countless obstacles he and his team faced.
Report to administrator
+1 #2 A K Mukasa 2022-09-13 20:26
Kenya is on its 4th president since Tibuhabura aka Museveni used arms to seize power. When he seized power Uganda’s GDP was $3.52 Billion and Kenya’s was $6.14 Billion.

As of 2022 Kenya’s GDP is $107.00 Billion and Uganda is about $34.00 Billion. What do the two countries have in common they share a border, they are both East African countries and both got their independence almost at the same time. That’s where the similarities end.

Why? It is because ever since independence Uganda has been run by idiots and continues to be run by idiots. You can forgive the first idiots because, relative to the current idiot, they didn’t have sufficient time to mend their ways. What excuse does the current group of idiots have?
Report to administrator
0 #3 Apollo 2022-09-13 20:27
On this day, I wish we were as democratically progressive as our Kenyan brothers and sisters. Sadly, we are under the heavy yoke of Cwezi colonialism camouflaged as a democracy.
Report to administrator
0 #4 Mubiru 2022-09-13 21:18
Please read.... on to hand over peacefully WITHOUT the use of a single bullet being shot.

FINALLY Kenya and Tanzania don't believe in dynasties or inheriting Dictatorships.
Report to administrator
0 #5 Joe 2022-09-14 17:59
[quote name="Mubiru"]Kenya is legally, morally and justifiably entitled to lecture all African countries on how to hand over peacefully with the use of a single bullets although Tanzania is not as despotic as other Africans.

Kenya's Vice President's address was a master piece and lecture full of intelligence and political acumen which the Dictators of Africa terribly luck.

May God Bless Kenya in line with Ruto proclamation that it was only God Who enabled him to win the Presidency despite the countless obstacles he and his team faced.

Mr. Mubiru you don't see to be well informed! While we should celebrate the Kenyan accomplishment, by no means should it qualify Kenya to lecture all Africans as you say, several African countries have done it several time, i.e. Namibia, Botswana, Sierra Leone, Senegal and any other.
Report to administrator
0 #6 kabayekka 2022-09-15 14:12
As African democracy stands, the majority win and the minority do not matter.

They can go and look after the cows and goats until the next national democratic election!
Report to administrator