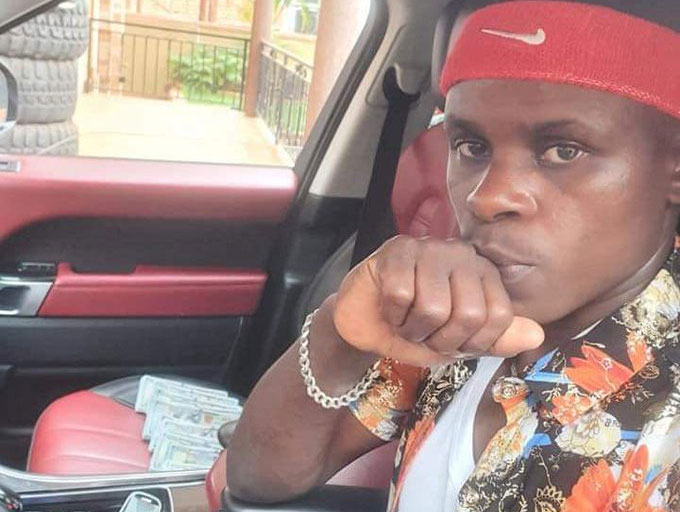 Deoxyribonucleic Acid Analysis (DNA) has linked city socialite Charles Olim alias Sipapa to 12 other robberies dating as far back as 2014, the directorate of forensic science at the Uganda Police Force has said.

Sipapa was arrested on Tuesday last week by the crime intelligence in collaboration with the criminal investigations directorate. Sipapa later appeared before the Makindye Grade One Magistrate's court on Friday together with his wife, Shamirah Nakiyimba on six counts of aggravated robbery.

This was after $429,000 and other valuables robbed from the home of a South Sudanese national Jacob Arok were allegedly found inside Sipapa’s home at Kityo close, Buwate, in Kira Municipality, Wakiso district. Detectives and the crime intelligence team traced an iCloud signal of one of the four iPhones robbed from Arok’s home to Sipapa’s residence.

Upon arrest, police drew samples from Sipapa for DNA testing. Findings from the DNA have since allegedly connected him to robberies and burglaries that were recorded in among other areas Ntinda, Kiwatule, Bugolobi, Kabalagala and Kira road. Police spokesperson, Fred Enanga, says that when the forensic experts run tests of Sipapa’s blood samples, they noticed that they marched DNA samples and fingerprints lifted at various robbery and burglary scenes.

In his statement at Kabalagala police station on August 29, Arok says that he and his family members woke to an open house in the wee hours of the morning.  He explains that when they switched on the lights, they noticed that the bag containing the money, a flat television screen, four iPhones, two Apple laptops, a Dell laptop and jewellery belonging to his wife were all missing.

When crime intelligence and detectives searched Sipapa’s home, they recovered the four iPhones, two apple laptops, and $70,000 that Nakiyimba allegedly attempted to hide in her husband’s shoes. Enanga said police is going to add all the evidence collected using DNA analysis to the current file so that the charges can be amended and heard at ago.

"Our directorate of CID in close coordination with the directorate of Forensics have established 12 other cases that are linked to Sipapa. This follows his fingerprints and DNA samples which were run in our databases and scientifically matched samples that we picked from 12 other scenes. This implies he was the perpetrator or one of the perpetrators at the scene of all the criminal incidents in Bugolobi, Kabalagala, Kira road, Jinja road, Kiwatule, Ntinda and Kyanja-Jomayi. The crimes stretch from the year 2014 to 2022. That is a span of 8 years," said Enanga.

Sipapa shot into the limelight in 2014  when he showed up in clubs splashing money on revellers. He later resorted to promoting music. One of the prominent artists he promoted is Joseph Mayanja alias, Dr Jose Chameleone. But the duo later fell out when Chameleone publicly accused Sipapa of being a serial robber.

Sipapa has close links to the state. Until the time of his arrest, he was being guarded by state-provided security guards and has appeared in several officially-released photographs with President Museveni.

+3 #1 Jose 2022-09-12 20:05
If your name is Olim call urself so these thieves
Report to administrator
+4 #2 A K Mukasa 2022-09-12 22:59
I don’t blame Sipapa or whatever he wants to call himself. I blame the system that’s so corrupt, that’s so rotten, that’s so warped etc that nurtures and grooms individuals like Sipapa and then attempts to take the high road when their acts of moral turpitude are laid bare.

This is a man who has been dining with Museveni and who was given protection by the NRM government. It was common knowledge that he was criminal but who isn’t in the NRM. Even the so called fountain of honour is a criminal but with power. While Sipapa is robing houses, his godfather is robbing the country.
Report to administrator
+3 #3 WADADA rogers 2022-09-13 09:00
Whatever the underlying game playing about with the arrest and subsequent. If it is true that a DNA has linked Sipapa to 12 other robberies dating as far back as 2014, then there is a problem with our investigators.

what were they doing to arrest him. I can imagine innocent people have been arrest in Sipapa's place and taken to prison . .
Report to administrator
0 #4 Lakwena 2022-09-15 07:24
Quoting WADADA rogers:

Whatever the underlying game playing about with the arrest and subsequent. If it is true that a DNA has linked Sipapa to 12 other robberies dating as far back as 2014, then there is a problem with our investigators.

what were they doing to arrest him. I can imagine innocent people have been arrest in Sipapa's place and taken to prison . .

In other words Wadada, since 1980 and before, including all the IGPs, which police officer does not know that Gen Tibuhaburwa is a serial criminal (capital) offender, who also aids and abets all the crimes in our law books and the Bible.
Report to administrator