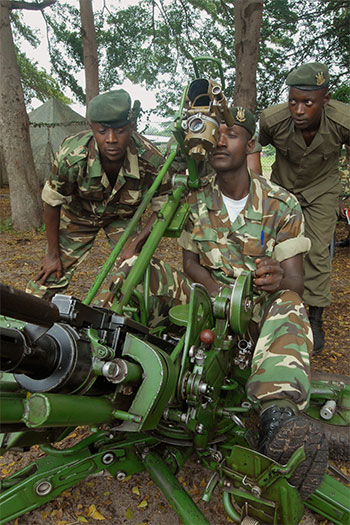 Burundi this week became the first country to send troops to the Democratic Republic of the Congo (DRC) as part of an East African regional force that aims to end decades of unrest in the eastern DRC.

But few details have been released about the deployment and some security experts worry that Burundi, like other DRC neighbours, has its own security agenda. Burundi is the first of six East African regional forces, or EAC, to deploy troops in the DRC.

"It's a welcome idea because we had a suspicion that most countries in the region had an interest in DRC, such as Uganda, Rwanda, Burundi, and therefore, we had thought the only countries maybe would have deployed without conflict of interest would have been Tanzania, South Sudan and Kenya,” he said.

“But now that Burundi has done it, it certainly means that eventually, a peacekeeping operation by the EAC is going to happen."

The East African integration bloc agreed in June to send thousands of troops to help quell the violence in the region after the emergence of the rebel group M23. On Wednesday, suspected M23 rebels killed civilians and destroyed a hydropower plant under construction in North Kivu's Virunga national park.

It's unclear what kind of structures the EAC regional force led by Kenya will be putting together to achieve its goal of defeating the rebel groups like M23 and other militia formations in the country. According to a report released by the Burundi Human Rights Initiative, late last year, Burundi secretly sent hundreds of troops into the DRC to fight a weakened armed group called Red Tabara, which carried out attacks inside Burundi.

Imbonerakure, the Burundi ruling party’s youth wing, is accused of widespread atrocities against political opponents and the Burundi masses. Carina Tertsakian, with the Burundi Human Rights Initiative, expresses concern that the regional mission does not seem to have a clear mandate.

"The main purpose of the unofficial Burundi military operation in DRC was to go after that rebel group,” she said. “Now, in the context of the regional force, it's not clear what's going to happen, not only in Burundi. There are other countries that are supposed to be sending troops. So, will each of these forces be allowed to just do what it wants and hunt down their particular opponents? In Burundi, this will be Red Tabara, in which case it would be in practice a continuation of what they have already been doing for the past eight months."

The Kinshasa government has expressed displeasure with the neighbouring country's alleged involvement in the armed conflict in Ituri, North and South Kivu provinces. Congo has a formal agreement with Uganda to allow troops to fight alongside its military against the armed group, the Allied Democratic Forces.

Speaking at the Southern African Development Community summit this week in Kinshasa, DRC President Felix Tshisekedi thanked the regional community for its support of Rwanda. Kinshasa does not want Rwanda to take part in the deployment for its support of M23, a claim denied by Kigali.

Tertsakian said Burundi is also partly to blame for the violence in eastern DRC.

"So, there's been these kinds of tacit agreements, de-facto agreements on the part of Congolese to allow Burundians to go in there and effectively do what they want there,” she said. “[The] worry there is that compared, for example to Kenya or Tanzania, Burundi is a direct party to the conflict there."

Nkunda said he anticipates Rwanda will take part in the operation despite Kinshasa's rejection.

"If now Burundi can, given that it has Red Tabara in DR Congo, am certainly sure even with M23 and the FDLR genocide whom Rwanda claims are in DRC, then even Rwanda can be able to deploy, and I think it's the question of time," he said.

Experts are worried that rights violations can occur as some of the forces pursue the rebel groups, and there is fear there might be no accountability in addressing abuses.

0 #1 kabayekka 2022-08-20 10:40
Interesting lot of these Africans who continue to interfere in the internal affaires of DRC anyhow after accusing many developed countries together with their UN about doing exactly the same thing!
Report to administrator
0 #2 kabayekka 2022-08-21 11:02
Where is the expensive African Union and the so called Pan- African organizations that need to sit down all these tyrannical African countries to put peace in their poor countries.

Surely it is only the rich nations of this world that are able to afford military wars these days.
Report to administrator