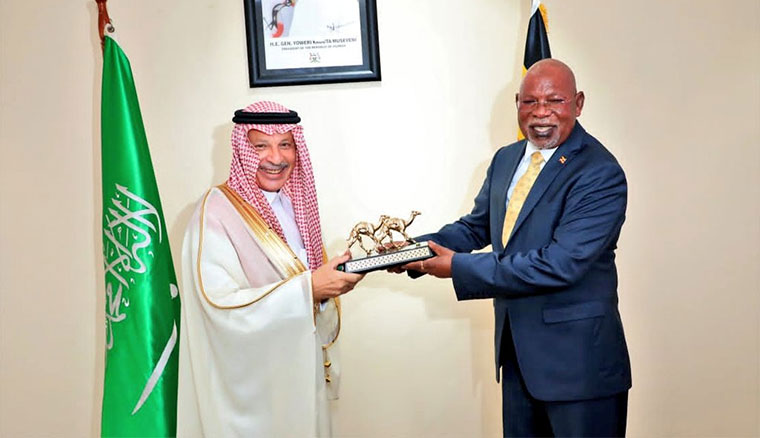 Minister of Foreign Affairs Gen Abubakhar Jeje Odongo with HE Ahmed Bin Abdul Aziz Kattan, the minister of state for African States Affairs of the Kingdom of Saudi Arabia

Jamal Mohammed Al-Madani, the ambassador of the kingdom of Saudi Arabia to Uganda, has said the upcoming Saudi Arabia National Day celebrations on September 3 will focus on strengthening common interests between the two countries.

The two countries have worked bilaterally in multilateral arenas on regional and international issues as they share joint membership in the United Nations (UN) and the Organization of Islamic Cooperation (OIC), among the membership of international organizations.

According to Al-Madani, there are many successful experiences of Ugandan workers in achieving their ambitions and creating special projects that have had an impact on their lives and helping their families and societies. The two counties signed an agreement on employment which is subject to development, evaluation and review.

On the other hand, the growth of trade between the two countries is expected after the adoption of Saudi Arabian Airlines to officially operate in Uganda. Last November, Uganda, through Foreign minister, Gen Abubakar Jeje Odongo, invited Saudi investors to invest in the fields of agriculture, mining, tourism, health, information and communication technology and expand its import of products from Uganda to include fruits, vegetables, spices, milk and cereals, in addition to the invitation to take advantage of the investment incentives provided.

Uganda is one of the top beneficiaries of Saudi Arabia’s more than $1bn annual investment in Africa and played a pivotal role to alleviate the burden of Covid-19 on the continent.

The damage to the environment does not concern Saudi Arabia. It is already a desert country. This country has decemented it neighbour Yemen to pieces. The Africans that go to work there are treated as miserable international Zoo animals.
Report to administrator
+5 #2 kabayekka 2022-08-18 13:10
This is one of the Ancient countries that survived on African slavery. Its people do not see any need to apologize.

They think that if they return the body of an African tyrant, African cannibals will consume it. Tebatubalamu magezi. It is now many years since human rights has been squandered in this rich desert country without a care in the world and counting!
Report to administrator
0 #3 Akot 2022-08-18 19:38
kabayekka, thanks.

The only good news we have is "climate change" that will not spare any country! But while it takes Saudi Arabia time to understand it, Museveni's Uganda won't be spared from being contolled by these inhumans!

What is sickening is USA/UK/EU that ensure good rule, respect of their people, are still members of United Nations, thus ensure Saudi Arabia, China, Russia...control shitholes!

USA/UK/EU walking out of UN will save not onlu shitholes, but developed world too as their lands are being filled with migrants seeking good living & these include terrorists!

UN considers Ukrain war normality now & the boss is only concerned about getting food out, but not ensuring the war is stopped by all means!

But Ugandans can say NO to the tribalistic system & UNITE to block & stop Museveni, then form the kind of governance they want!

What are Ugandans waiting for?

USA/UK/EU MUST walk out of UN & form a real humane body, to stop useless African rulers handing over their land riches; Russia, Saudi Arabia, China &
Africans will end up being slaves, used to empty Africa of its land riches!

USA/UK/EU, please, stop this quest by demons to own Africa by just ending membership of UN & forming a real humand body!