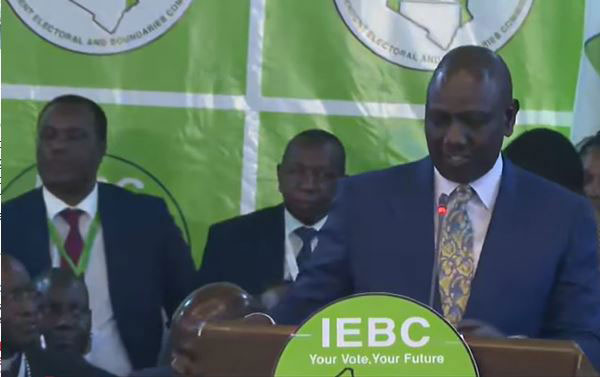 William Samoei Ruto has been declared the winner of Kenya's presidential elections by the Independent Electoral and Boundaries Commission (IEBC) amidst the confusion and chaos.

IEBC chairperson Wafula Chebukati announced Ruto and his running mate Rigathi Gachagua as the winners of the August 9 presidential election at the Bomas of Kenya, the national tally centre. Ruto won the vote with 50.49 per cent ahead of his main challenger Raila Odinga who garnered 48.85 per cent of the total votes cast. Ruto received 7,176,141 votes against Raila's 6,942,930 votes.

Ahead of the announcement, four out of the seven electoral commissioners led by IEBC vice-chair Juliana Cherera 'disowned' the results "due to the opaque nature of the final process". Cherera refused to elaborate on her 'opaque nature' statements, saying she will make statements later on. Cherera said the election results will definitely be challenged in court.

After being declared winner, Ruto promised to unite Kenyans, saying they had raised the political after defying ethnicity lines and instead voted for issues. He thanked his "worthy competitor" Odinga and promised no revenge or vengeance even against those who did so many things against him. Resonating with his campaign's inclusive theme, Ruto promised to take Kenya to another development level that will not leave anyone behind.

He challenged those doubting his win to get a calculator and go to the IEBC website and add the election results for themselves.

Ruto was born in 1966 in Sambut village, Kamagut, Uasin Gishu County in the northwestern part of Kenya, to Daniel Cheruiyot and Sarah Cheruiyot. He graduated with a bachelor of science degree in Botany and Zoology from the University of Nairobi in 1990, and later in 2011 with a master of Science in plant ecology.

He then taught at a school in the North Rift region. His first involvement in politics was in 1992 when he joined the YK-92, a youth group campaigning for the re-election of Daniel Arap Moi, and was elected treasurer. In the 1997 Kenyan general election, he contested for parliament and beat the KANU candidate and incumbent, Reuben Chesire, who was also the Uasin Gishu KANU branch chairman. He caught the eye of Moi who appointed him KANU director of elections.

In 2002 he supported Moi's preferred successor Uhuru Kenyatta and was rewarded with a cabinet post as assistant minister in the Home Affairs ministry. He was later promoted to full minister after some ministers defected to the opposition ahead of the 2005 elections.

In 2008, Ruto was named Agriculture minister under Mwai Kibaki and minister of Education in 2010 and was relieved of his ministerial duties and remained a member of parliament in 2011. He joined Uhuru Kenyatta to form the Jubilee Alliance for the 2013 presidential election where he was running mate and later deputy president after the duo beat their main rival Raila Odinga to the presidency. He had been Eldoret North Constituency MP until 2013.

He served as the acting president of Kenya between 5 and 8 October 2014 while Kenyatta was away at The Hague. This came after president Kenyatta was charged for his alleged involvement in the 2007/2008 post-election violence which left about 1,300 people dead.

Over the two terms of their presidency, Ruto fell out with Kenyatta for unclear reasons. Some reports say Ruto had intended to lead an impeachment vote against him just before the 2017 election accusing him of mismanaging the affairs of the country. The claims were repeated by senator Junet Mohammed, earlier this year, claims that Ruto has consistently denied.

The breakdown in relations was enhanced by the popular 2018 ‘handshake’, a reconciliatory event between Kenyatta and his rival, Raila Odinga. The former was then endorsed by the president to be appointed High Representative for Infrastructure Development in Africa.

Kenyatta has openly expressed his support for Odinga, and resentment for Ruto in the run-up to the August polls, only running short of attending his rallies. Through the campaign, the two have accused Ruto of being a corrupt person and investing in neighbouring Uganda.

Having been declared the winner of the 2022 general election, Ruto will now be President of the Republic of Kenya for the next five years. He will be deputized by Rigathi Gachagua.

Uhuru thought that my bribing Raila with the handshake and a promise of presidential endorsement, it would save him from potential prosecution. Thank you Kenya for rejecting political dynastism.

Raila is a born failure and should just quit. Congratulations Ruto for withstanding the abuse, embarrassments and disloyalty from Uhuru. Raila even refused to debate you. Shows how arrogant he was. As for the divisions in the electoral commission, ahaaa. Those must have been bribed by Uhuru and Raila.
Over to Byabakama now
Report to administrator
0 #2 Akot 2022-08-15 19:39
Now is time Kenyans begin to look at themselves & help one another as they have been so kind & took in so so many migrants/refugees!

Especially as UN/USA/UK/EU consider Kenya peaceful home for migrants/refugees & ensure they are taken care of, while poor Kenyans have been ignored for so so long!

Uhuru Kenyatta gave Kenyas chance to a real beginning of real democracy & they MUST just consolidate it & make their land an e.g of demecracy for the rest of misruled Africa!

I wish my Kenya cousins & Kenyans luck & they must remain calm & UNITED now, to ensure a real beginning of real living, in their kind good country!

Uhuru Kenyatta not only gave Kenyans chance to a peaceful beginning for a different tomorrow, but put an end to the long time tribal fight his father & that of Odinga made Kenyans go through, for no reason!

Kenyans, UNITED, you will reform your country!
Report to administrator
0 #3 WADADA rogers 2022-08-15 22:15
Politics is a game of numbers, whoever scoops more takes the day. I wonder what will happen to the likes of Babu Owino, Lee Makweeny, Gideon Moi, Harman Manyora, Kalonzo Musyoka, Atwoli, Wamalwa and chege, for they have been abusing Ruto every day to the extent that they failed to tell Kenyans what they were intending to do for them.

The failure to attend the Presidential debate cost Raila a chance to become President. On the other side, i think they relied so much on Uhuru Kenyatta but it appears the man had was under cover working with Ruto.
Report to administrator
+1 #4 Wainanchi 2022-08-16 07:56
Congratulations president elect Ruto.
Uganda salutes and congratulates you Your Excellency Mr President
Asante Sana!!!
Report to administrator
0 #5 Lakwena 2022-08-16 18:53
Quoting Wainanchi:

In other words Wainainchi, that by design, hooks or crooks Ruto's party color is also "poisonous yellow"; wasn't Ruto NRM coached in rigging erection and/or sponsored?

Otherwise, would you and Gen Tibuhabuwa have congratulated Oginga Odinga with glee? I am sure NYET!
Report to administrator
+1 #6 Wainanchi 2022-08-16 23:00
@ Lakwena..
When I see your bulshit comments you know what I ak thinking pig and scumbag

F...ck of miserable idiot.
Your only way is to mudslide and hate Uganda.
You and other pigs must be descendants of defunked and defeated ugly and killing and criminal forces which are long gone.in history of Ugands.

Reading your disgusting comments and those of likeminders like you who are bullshitting and polluting this leading newspaper for those who know the truth Nd who read my comments says it all.

You,d better do to.find some other ways to voice your anger and frustration.
For example go to dig the fields or fo tl market to sell something or if you are a a spy who is constantly accusing our president and NRM government,message is clear.
YOU WILL FAIL MISERABLE PEACE OF S....
Report to administrator