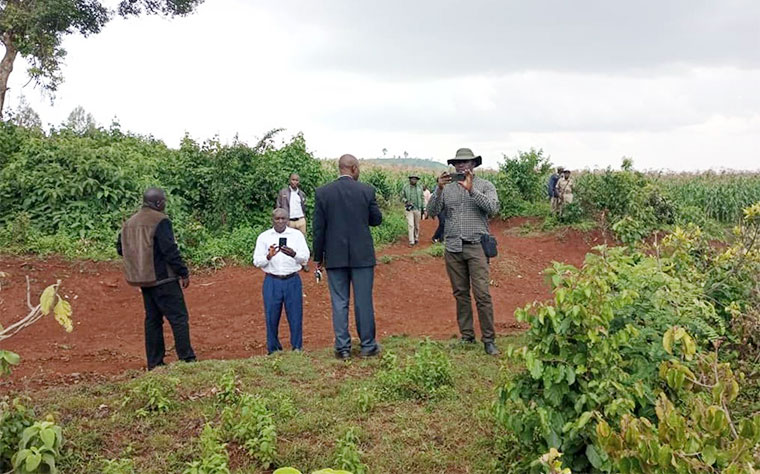 Officials during the field visit

SHAU led by senior legal officer Peter Ndomugyenyi spent at least two days in the district carrying out investigations into the alleged misappropriation of public funds. The three non-existent roads, district officials had claimed were in Suam sub-county.

"I can't believe this and we can't continue keeping this kind of officers who are denying the community their right to development," said Ndomugyenyi.

Ndomugyenyi said they will go back to the district, adding that many projects which are being accounted for on paper do not exist. Bukwo resident district commissioner (RDC) Samuel Hashaka Mpimbaza said they were also shocked to read a report that these particular roads were worked on yet no grader even did any clearing.

"It is terrible here in Bukwo where officials use public resources at their liberty without any fear or following the right procedure," he said.

Julius Chelimo the district chairperson said the community was now turning against him, accusing him that he was not lobbying for developmental projects yet it is the officials at the district who have been embezzling the money meant for projects.

"I am happy that even the community is now getting to know the reality because they have been complaining thinking my leadership was not working," he said.

Meanwhile, all the six officials in Bukwo earlier arrested have been released on police bond waiting to appear in court. They include Franklin Kitiyo the district production officer, chief finance officer Andrew Bukose, David Aliwa who is the acting deputy chief administrative officer, and Catherine Cheptanui.

Others are Fred Sokuton Twalla, the district education officer and Limo Chelimo, the Sokuton acting town clerk Suam town council. Gertrude Chelangat, one of the residents, requested the inspectorate of the government to also visit the district and see for themselves the corruption in the district.

0 #1 Yumbe 2022-08-15 10:49
Corruption in local governments stincts. That is the reeason those people killed their CAO. It is terrible.
Report to administrator
+1 #2 KATO STEPHEN 2022-08-15 10:56
RDC Samuel Hashaka Mpimbaza should also be culpable. why does it have to the the SHAU to discover the rot when he could have at least highlighted the mess before the entire misallocation of the 2billion.

That is why many of them should receive the VIP treatment. Their fingers should be cut and they are allowed to continue in their employment to pay back this loss of revenue from the tax-payers of this country!
Report to administrator