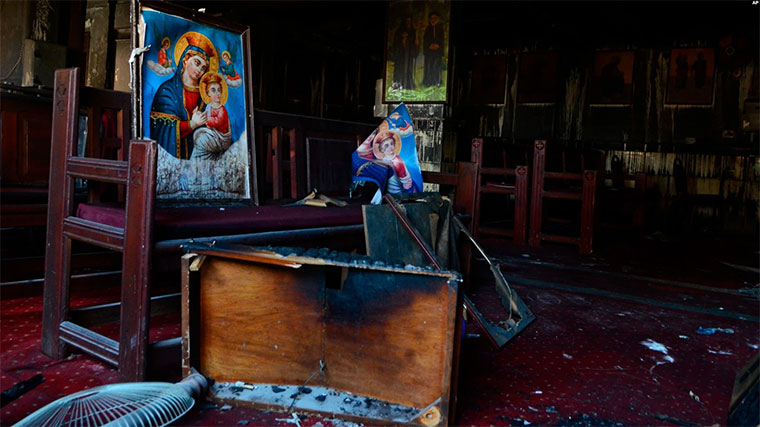 Some of the burned furniture, including wooden tables and chairs, and religious imagery

Egypt's Health ministry says 41 people were killed when a fire broke out in a Coptic church in the densely populated Cairo suburb of Imbaba. Witnesses say the fire started following a short circuit in an air conditioning unit.

People shouted and screamed as the fire raged on the top floors of the Martyr Abu Sefein Church. Witnesses say it took firefighters three hours to arrive at the scene. Many of the victims were children.

Egyptian media, quoting eyewitnesses, reported that the fire started after a power outage at the church caused an electrical generator to turn lights and air conditioning units on, triggering a short circuit in one of them.

Prime Minister Mustafa Madbouly, along with General Ahmed Rashed, the governor of the Giza province where the church is located, went to the fire scene. They presented the government's condolences along with pledges to help the families of the victims.

Madbouly said he and members of his government inspected the site of the fire and are prepared to pay 100,000 Egyptian pounds (about Shs 19m) to the families of those who died and 20,000 pounds (Shs 3.9) to families of those who were injured, in addition to providing top-notch treatment to victims who were hospitalized.

Authorities have also pledged to set up technical and engineering committees to investigate the cause of the fire. Egyptian political sociologist Said Sadek told VOA that the church is located in a neighbourhood full of narrow streets and alleyways. The area was a battle zone between government forces and Islamic militants in 1990.

“[Coptic churches] are usually located in very poor areas, overcrowded, and this is Sunday service by the way, and that is why [we are seeing] the high toll,” Sadek said. “Because they exist in overcrowded areas — usually alleys — civil defense and fire brigades cannot reach them very quickly, so this is a problem."

The incident came nine years to the day government security forces evacuated a Muslim Brotherhood sit-in camp in the north of Cairo, resulting in a large number of casualties.