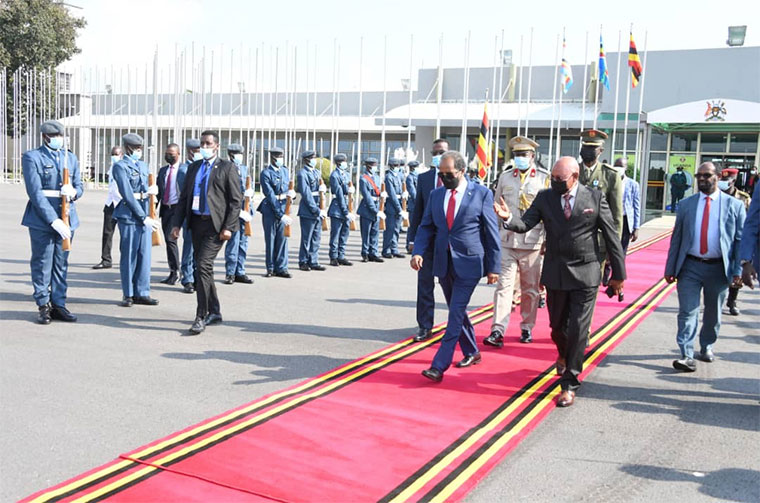 He was invited to Uganda by President Yoweri Museveni with whom he held bilateral discussions. During his stay, he visited the (military) Luwero Industries in Nakasongola district and also participated in the inaugural Uganda-Somalia Investment Business summit at Speke Resort Munyonyo.

He also lobbied Uganda to support Somalia's bid to join the East African Community (EAC), a regional block that brings together now seven countries. Speaking at the summit yesterday, Museveni said Uganda doesn’t have any problem with Somalia joining the EAC.

He also reiterated Uganda’s commitment and continued support for Somalia in its struggle for peace.

“We shall continue to support Somalia in their struggle against the terrorists, and I'm glad the people of Somalia have stood against these people,” he said.

Museveni also used the summit to invite the Somali business community to come and invest in Uganda.

“Businesspersons are the most useful group because these people know the importance of the market," he went on. "Businesspeople, historically, have contributed to the integration of countries. If you are a businessman, you should not look at the tribe or religion of the customer.”

+5 #1 Lakwena 2022-08-12 07:25
Although they want other people's and countries hospitality and/or sympathy, unless they change their attitude, including religious intolerance and racism; the Somali are generally extremist and nasty people.

E.g., In Uganda, Kenya or Tanzania, they are free to exercise their freedom of worship, build Mosque and congregate. But let any Ugandan, Kenyan or Tanzanian Christian try to proselytize (preach) or start/build a church in Mogadishu; the Somali would want to slaughter that person.

In other words, already we have enough enigmas problem countries like Rwanda, Burundi, South Sudan and recently DR Congo; Somalia can only aggravate the enigma.
Report to administrator
+4 #2 Akao 2022-08-12 14:20
I agree with that Lakwena. That part of EA don't consider themselves Africans anyway. Somalian think they are arabs and ethopians think they are jews. They should form their EA2 with Ethopia, Etretria, Djbouti and Somililand
Report to administrator
+3 #3 kabayekka 2022-08-12 14:57
Lwakwena you have a good point. The East African Community is an inclusive organization. How come such a dysfunctional state is invited to join without changing its political hard core Islamic standing?

It is an inherent weakness to majority rule in which the majority of an electorate pursues exclusively its own objectives at the expense of those of the minority factions.
Report to administrator
+1 #5 kabayekka 2022-08-12 20:13
The East African democracy is very clear about that. If in a member state of the EA community by-election the constant winner of NRM for Uganda as an example gets 100,000 votes, and the FDC party candidate gets 99,990 votes, the minority by only 10 votes less is cancelled out and these voters did elect badly.

They must go home and look after their goats and wait for another election when they might be recognized as winners of democratic elections if next time they manage to get the 100,000 votes in that particular constituency!

If other African states do not see such political corruption in the EAC, they are very much mistaken to join such a dodgy African unity that is never going to help govern better 220 million Africans.
Report to administrator