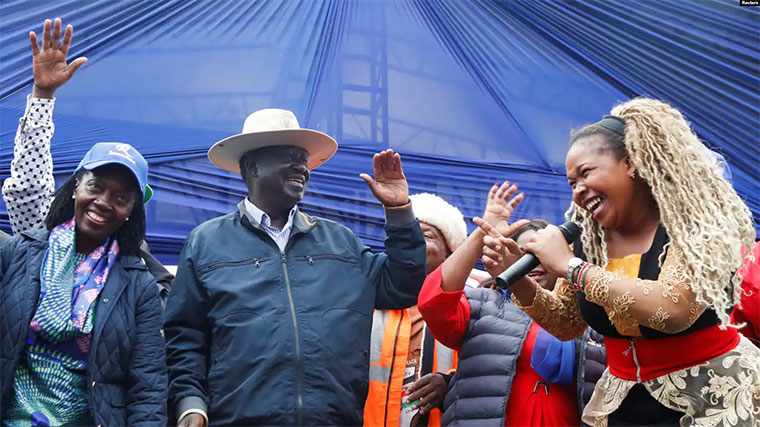 Raila Odinga has won Kenya’s diaspora vote, with all of the polling stations having sent in their forms (Form 34A) by Thursday morning.

Others are; South Africa, South Sudan, Tanzania, United Arab Emirates, the United Kingdom and the USA, each with one to three polling stations depending on the number of registered voters.

Ruto is leading in Doha, Qatar where he polled 519 votes against Odinga’s 427, out of a total of 1,437 registered voters, while George Wajakoya Luchiri and Waihiga Davis Mwaure have 4 and 1 consecutively.

Doha was also the biggest polling centre with 1,437 registered voters, followed by Kampala-Uganda with 1,411 voters. In Uganda, Odinga has 553 votes against Ruto’s 235, while Wajakoya has two and Waihiga one, according to Form 34A posted on the IEBC portal.

Form 34A is the initial form filled by presiding officers at the station after vote counting, and is used by the IEBC to tally the results, and the commission says its results are final. All results are deemed provisional until the IEBC makes a declaration.

Tanzania, with three polling stations, one in Arusha and two in Dar es Salaam was also the third largest centre after Qatar and Uganda, with a total number of registered voters of 1,392. Odinga polled 274 votes against Ruto’s 127.

At the Kigali polling centre, Rwanda, Odinga got 220 votes while Ruto managed 163.  In the other East African Community nation, South Sudan, Odinga has 514 votes, against Ruto's 269, out of a registered total of 977.

In the United Arab Emirates (UAE), it was a bit closer with Odinga polling 273 and Ruto 223 out of the total of 745 registered voters. It also big wins for Odinga in the USA and the UK where he got 393 and 373 votes respectively, while his closest rival polled 132 and 109 respectively. This comes as the tallying nears the end with more than 13 million votes counted out of about the 14 million total.

By 2 pm, Raila Odinga was leading with 48.48 per cent against Ruto’s 49.12 per cent, according to Citizen TV’s tallying and live broadcast of the IEBC-released results.

If it ended that way, another election would be organised in accordance with the laws of Kenya, since none of the candidates would have got the required 50 per cent plus one vote.

The beatings of innocent voters as shown in many of the social media outlets record well that the national election was not free and fair. It must be repeated.

A car from Uganda driven in Kenya was discovered by the public loaded up with ticked voting materials.

Only politicians with the interest to win were the only ones encouraged to vote. Thus political parties own and organise elections in Africa by parliamentary subscription.

There are no new reforms to encourage many citizens to participate in democratic elections. Elections are there to give credibility to tyrannical rule in Africa.
Report to administrator
0 #2 kabayekka 2022-08-12 21:36
As long as national freedom of speech, press, and assembly is granted, the minority African tribes people can legally make use of these rights in order to make sure their voices are not closed up by the majority rule.