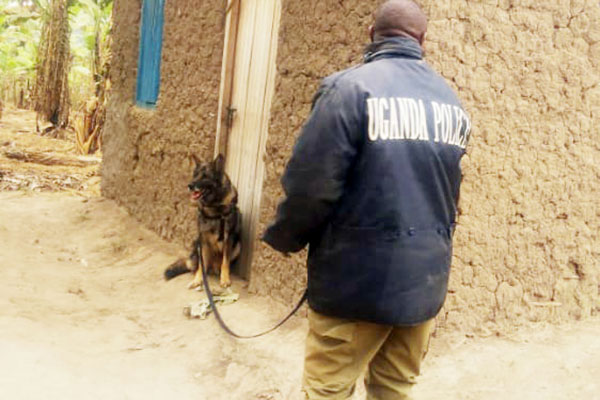 In just the past one month, the police have made significant breakthroughs in 10 high-profile complex crime scenes thanks to the deployment of sniffer dogs.

As ERNEST JJINGO writes, the police canine unit has been thrust into the limelight as the long-term solution to the quick unlocking of crime scenes.

On July 19, the territorial police in greater Bushenyi and Sheema got information of a gruesome murder of two-year-old Christabella Kemigisha. Her body was dumped in front of their neighbours’ home in Mutanoga cell, Kigarama parish, Kigarama sub-county in Sheema district.

She had disappeared the previous day and a team of homicide detectives, including scene of crime officers (SOCOs), visited the crime scene with the help of a sniffer dog.

Within minutes, the police had managed to trail the tracks of the criminals and discover blood-stained murder exhibits, including a hoe, a log and clothes of the deceased in the house of Justus Byamukama. He was arrested and confessed to the murder before leading the police to his four accomplices.

Martial Tumusiime, the police spokesperson for Greater Bushenyi, couldn’t believe how fast the sniffer dog solved the puzzle. “We normally rely on interrogation and witness testimonies to unlock the crimes but it is becoming more rewarding to use sniffer dogs because they are fast, accurate and require less resources,” he says.

"If only we can have more trained dogs at community level, it would help us quickly unlock crime scenes with more precision." Then on July 27, Apollo Tiwangye, a resident of Rwakashana cell, Nyarubare parish in Ntungamo, was found murdered.

Upon receiving the info, a team of officers from the homicide department, with the help from the police K9 unit, responded and cordoned off the scene. The team brought in a police sniffer dog, Jaguar, which picked the scent and tracked for a distance of one kilometre on a hill and led the officers to the home of the deceased’s second wife identified as Agnes Arinaitwe.

A search was instituted and the phone belonging to the deceased was recovered with blood stains. The territorial police arrested Arinaitwe and her son for the murder and it was soon established that the couple had a long-standing domestic wrangle.

Samson Kasasira, the police spokesperson for Rwizi region, said the suspects had initially been treated as witnesses until Jaguar revealed the ugly truth.

“There was hardly any killer motive but Jaguar revealed everything,” he said. “We get many such alarms weekly but we lack the capacity to attend to each of them because we have a few sniffer dogs.”

Kasasira’s plea is part of the wide-ranging effort to have police units equipped with sniffer dogs. And on July 20 when President Museveni addressed the nation, he noted that security is on the trail of the panga-welding gang that attacked a police checkpoint in Luweero before killing an officer and fleeing with two guns.

“The other day, there were some panga groups that attacked police officers in Luweero. Police sniffer dogs did a good job to track them up to where they boarded their car. We are now looking for that car. There is no way you can do bad things and get away with it and think we shall not know you,” the president warned.

Indeed, the recently-released police crime report indicated that the K9 unit is the most successful in arrests and prosecution of offenders. Of the more than 8,000 suspects arrested out of the use of sniffer dogs, about 2,500 were successfully prosecuted and convicted on their own plea while others are still battling the offences in courts of law.

The report shows that it is now becoming easier to use dogs to trace for suspects and recover exhibits instead of prosecuting cases. However, the report notes that whereas the use of dogs may not reduce the burden of proof, it is a useful as a force multiplier that helps investigators identify culprits and recover exhibits.

“If only there can be a K9 unit at every parish level, it would greatly reduce crime in the country,” recommends the report.

Commenting on the recent success, a top police official who preferred anonymity said efforts are already underway to have the K9 unit represented across the country.

“We are working with the relevant government agencies to stem crime and we believe we can greatly eliminate it with more support and cooperation from all stakeholders.”