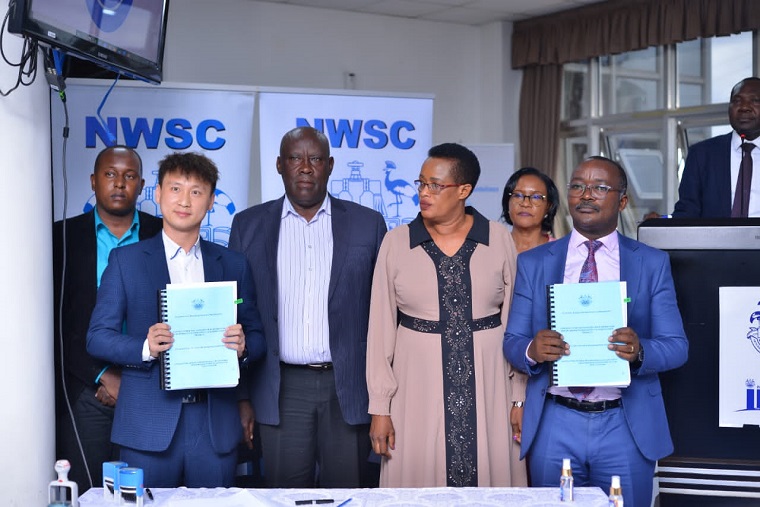 Official after signing the agreements in Bugolobi

The government has moved a step closer to ending the water crisis in Isingiro district after signing a contract for the multi-billion Kagera Water infrastructure construction project.

Isingiro, one of the districts located in the country’s cattle corridor, is a water-stressed area in which farmers struggle to get water for their animals and domestic use during prolonged dry spells.

Despite being close to River Kagera and Lake Nakivale, farmers in Isingiro haplessly look on as their animals starve to death and lose crops in the gardens at the peak of dry seasons. To address the situation, government and the French Development Agency (AFD) officials on Tuesday signed off the project contract, worth €153 million (Shs 604.8 billion).

The project will be implemented by National Water and Sewerage Corporation (NWSC) and the ministry of Water and Environment while the contractor is Sogea Satom, a French firm.

According to the project designs, once the works are completed, NWSC will be able to draw 700 million litres of water per day from R.Kagera to supply for production and drinking in rural areas of Isingiro and Mbarara city. The supply capacity will also meet demand for the Nakivale and Oruchinga refugee settlements.

Meanwhile, four other contracts were signed at the same ceremony held at the NWSC Resource Centre, Bugolobi in Kampala, to boost water supply for the districts of Gulu, Kyankwanzi, Kalungu and Bushenyi.

NWSC managing director Eng Silver Mugisha said the Kyankwanzi, Bushenyi and Kalungi water supply projects will be funded by the utility from its domestically-financial generated resources.

The Karuma-Gulu water transmission main construction project is donor-funded through an agreement between the government and the World Bank.

Mugisha affirmed the projects will be implemented under strong fundamentals that include, project cost control-within cost and time, initiatives to protect the environment and innovative project funding initiatives.

He appreciated the support from ministries of Water and Environment, Finance, Planning and Economic, Uganda Development Bank, among others.

Aisha Sekindi, the minister of state for Water and Woman MP for Kalungu district, who presided over the signing ceremony, said the projects are timely and will help improve access to safe water in the five districts, especially those under the cattle corridor. She urged water users to pay bills on time which subsequently helps NWSC to extend its services to more Ugandans.

Mugisha said NWSC is innovating vast engineering solutions to improve lives of the people of Uganda through the provision of clean safe water, and added that all the above projects were internally designed by NWSC engineers.

According to Mugisha, water and environment protection are tandem as such the utility has rolled out environmental protection initiatives aimed at conserving the environment.

In its strategic plan, NWSC is focused on institutional sustainability while looking at the overall business growth. Subsequently, the utility has set a target to increase water connections from 900,000 to 1.2 million, grow its assets from Shs 3.9 trillion to Shs 6 trillion and extend services to 25 million Uganda by 2025.

Currently, NWSC services are available in 263 towns across the countrywide compared to 26 towns in 2015.