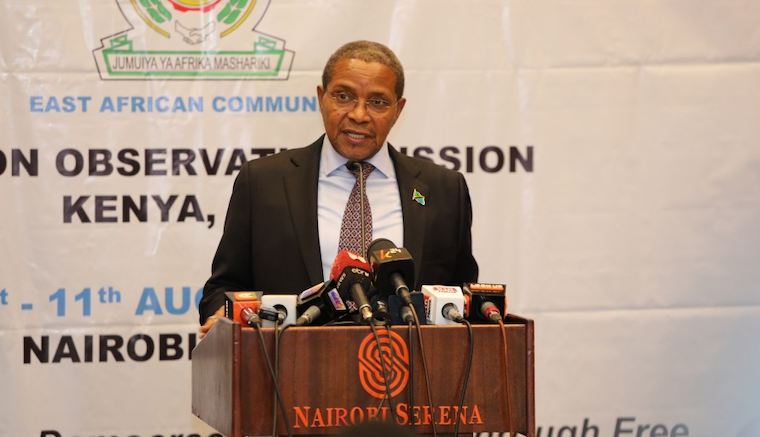 The former president of Tanzania Jakaya Mrisho Kikwete is the head of the mission comprising about 50 observers from EAC partner states. The mission will be in the country from August 1 to August 12 to observe the elections.

Speaking during the launch in Nairobi, Kikwete said the Mission's mission is to assess the level of preparedness of the key electoral stakeholders for this election.

It is also charged with assessing the level of compliance of the electoral processes and management to the international, regional and national established laws, principles and practices.

The mission will also monitor and assess adherence to the democratic principles of the EAC as enshrined in the treaty; and offer objective recommendations for continuous improvement in the conduct of such elections. This mission will build on the outcomes of the joint AU/EAC/IGAD/COMESA pre-election assessment conducted over the last month.

Kikwete will announce the findings of the mission through an interim statement on August 11, 2022. Raila Odinga heading Azimio la Umoja, an alliance of his Orange Democratic Movement and the ruling Jubilee is tussling it out with Kenya Kwanzaa, an alliance that includes its candidate; William Ruto's United Democratic Alliance (UDA), Amani National Congress (ANC) and the Forum for the Restoration of Democracy-Kenya (FORD-Kenya).

Five-time contender, Raila Odinga is deputized by veteran politician Martha Karua, and enjoys the support of the incumbent Uhuru Kenyatta. Ruto whose running mate is Rigathi Gachagua is also the vice president of the country.

Others are David Mwaure Waihiga of Agano Party and George Wajackoyah from the Roots Party. Wajackoyah's campaign is mainly concentrated on proposals for new nontraditional sources of revenue for Kenya, including legalising marijuana, promoting the production of snake venom and harvesting hyena testicles for export.

The run has since created two distinct class-based campaigns with Ruto presenting his as a fight by 'hustlers' against the dynasties of the old monied and ruling Kenyatta and Odinga families.

Uganda is watching, hopeful that the polls will end peacefully without a repeat of the 2007/08 post-election violence. That period saw Uganda-bound cargo in Nairobi and western Kenya destroyed and the Uganda-Kenya railway uprooted in Kisumu.

Several Kenyan leaders have been calling for peace throughout the period. That notwithstanding, the government in Kampala has been encouraging importers to use the Tanzania route to avoid any undesirable eventuality in Kenya.

Energy and Mineral Development minister, Ruth Nankabirwa says they have been testing the Tanzanian ports of Tanga and Dar es Salaam and found them fine. She has assured Uganda that there will be steady supplies of petroleum products no matter what happens in Kenya.

0 #1 Akot 2022-08-02 20:00
Kenyans must now stand firm to give themselves chance to a REAL beginning in REAL democracy they have been fighting for!

Kenya has been land for migrants/refugees from neigbouring shitholes & UN/UNHCR/CHARITIES...ensure they are served, just as in shithole Uganda, while poor Kenyans' & Ugandans are ignored!

While Kenyans have chance to have a beginning, tribally divided ruled Ugandans will be ignored completely, but Uganda will continue to be considered peaceful land for migrants, refugees, diplomats!

Time Ugandans say NO to the tribalistic system & UNITE to block & show Museveni way out!
Report to administrator