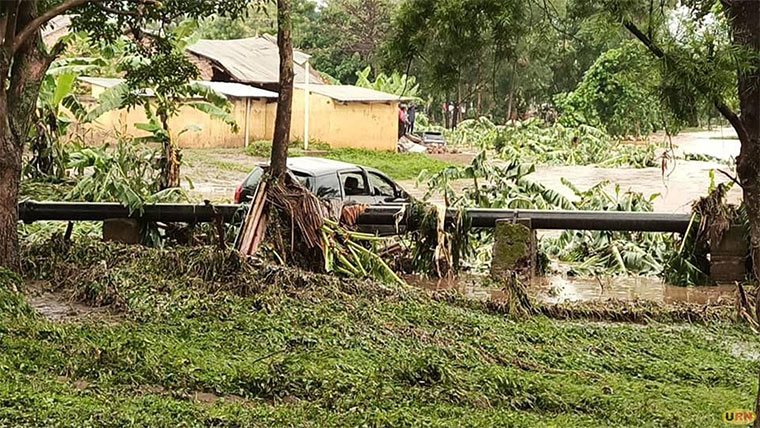 Some of the cars who were swept into rivers

At least 10 people have been confirmed dead in flash flooding and mudslides in Mbale and Kapchorwa in eastern Uganda. Mbale registered seven deaths while three died in Kapchorwa according to the Uganda RedCross Society.

Among the dead is a Uganda People’s Defense Forces (UPDF) soldier, private Sam Chemulindwa, 26, attached to the 53rd Battalion who was swept away by the floods that hit eastern Uganda on Saturday evening through to Sunday morning.

The rains that started on Saturday at around 8:00 pm till about 7:00 am on Sunday morning, left the areas of Namabasa, Busajabwankuba, Busamaga, Nkoma, Milo Taano among others ravaged.

The flooding followed heavy rains that filled the major rivers in Mbale, Sironko and Bulambuli. The flooding broke river banks, filling up the roads and washing several cars into rivers where some of the victims are said to have died.

Ahamada Washaki, the Mbale resident city commissioner, said that three people drowned in rivers Namatala and Nashibiso. He added that there are fears that more other people have died, especially boda boda riders and drivers of small vehicles.

Sarah Nambafu, a resident of Milembe cell, said that Nabugonga river flooded and water entered her house, making life hard for her and two children who survived death. She notes that she last experienced such heavy rains in 1997 when all the rivers surrounding Mbale flooded and people died.

James Magosha, the chairperson of Milenbe cell in Nabuyonga ward and Yusuf Muhubu, the councillor representing IUIU Ward at the Northern Council said floods have displaced many people in his area and lots of property destroyed.

0 #1 WADADA rogers 2022-07-31 21:43
So sad, that is the effect of the indiscriminate destruction of vegetation cover, wetlands and encroachment of river banks
Report to administrator