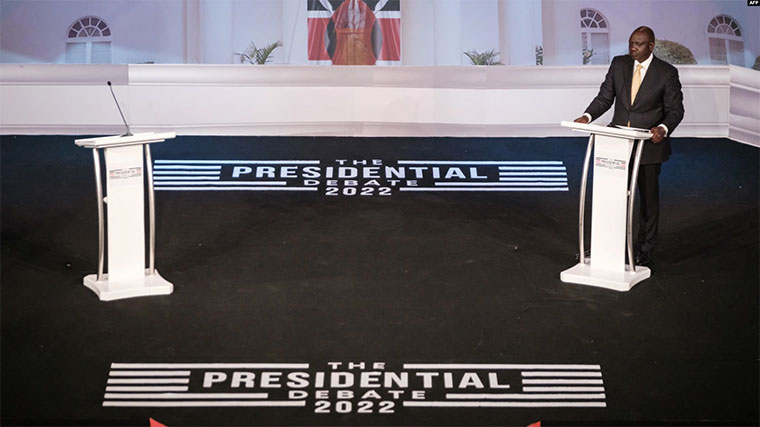 With less than two weeks before Kenya’s elections, millions of Kenyans watched a presidential debate Tuesday that had only one debater. Deputy President William Ruto appeared solo after his main opponent, Raila Odinga, refused to participate in the live event.

Ruto had the stage to himself for 90 minutes to answer questions and explain what he would do if he occupied the president’s office. He promised, among other things, to reduce the cost of living and fight corruption.

“We are a country that is faced with mounting challenges,” he said. “We have a huge track record of what we have achieved but there is tremendous opportunity out there for more to be achieved. … I believe I am the candidate with a plan to be able to get Kenya to the next level.”

Former prime minister Raila Odinga pulled out of the debate last week, saying he was not willing to debate someone who had no regard for ethics and public morals. Ruto responded Tuesday night.

A recent survey found Odinga holding a strong lead over Ruto heading into the final weeks before the August 9 election. Ruto has been deputy president for the past 10 years and held ministerial positions in the previous government. Michael Agwanda, a Kenyan political commentator, said Ruto is having trouble shaking off the political blame that comes with incumbency.

“I strongly believe he was caught between a hard place and a rock because he has been part of the system for a very long time,” Agwanda said.

“That was more less basically not being straightforward,” Agwanda said.

Nairobi resident Mellanie Busienei watched Tuesday’s debate. She saod it changed her mind on who she will vote for come Aug. 9, though she did not reveal which candidate she now prefers.

“I just hope for the best definitely,” she said. “Yesterday’s debate changed who I was supposed to vote for. The fact that I have seen who can commit and who cannot, the promises and the agenda have always been the same since independence.”

Matilda Murage said she did not watch the debate. She said previous unfulfilled promises of earlier leaders have made her not vote.

“I don’t trust anybody there,” she said. “There is nobody I want to give my vote to because they lie, they steal. I'd rather keep my vote.”

Ruto, who is 55, is running for the Kenyan presidency for the first time. The 77-year-old Odinga is making his fifth bid for the top job.

0 #1 WADADA rogers 2022-07-28 12:35
It is not obvious that any given debate for a political office automatically favours the one who has attended. in 2017, Raila Odinga attended the Presidential debate alone, Uhuru who did not attend won him in the final election.

Here in Uganda, I recall an incident where Fred Nyanzi attended a debate with the likes of Nsereko for the position of Kampala Central Member of Parliament 2021. What killed Nyanzi was his inability to articulate issues and failure to express himself.
Report to administrator
-1 #2 Moody S 2022-07-29 05:42
Ruto is a very lucky man. His opponents decided to donate their prime time slot to him (which I'm sure they'll regret soon) and yes, the man did a sterling job. He hit the ground running, the future looks bright for him.
Report to administrator
+2 #3 Kabinda 2022-07-31 15:11
Quoting Moody S:

Ruto is a very lucky man. His opponents decided to donate their prime time slot to him (which I'm sure they'll regret soon) and yes, the man did a sterling job. He hit the ground running, the future looks bright for him.

A very shabby political observation. Laughable to say the least.
Report to administrator