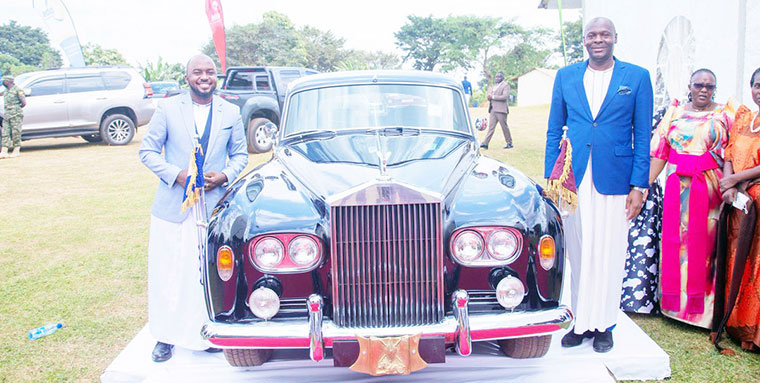 Ssekabaka Edward Muteesa II was known to be close to his children and regularly traveled with them.

In the years leading to the 1966 attack on his palace, Muteesa had started traveling in a state-of-the-art Rolls Royce Phantom V Cloud, one of the three luxurious limousines as part of his fleet. Kabaka Ronald Muwenda Mutebi was one of those few children in the country that used to enjoy a car with an automatic gearbox and power windows, in the 1960s.

Muteesa was the president of Uganda at the time. Two of these vehicles are untraceable at the moment one of which is said to be somewhere in Cape Town in South Africa. The remaining one was kept at State House for years before it was sent to the Uganda Museum.

It was what one could describe as scrap metal. No wheels, seats, windows and all that. However, its engine and front windscreen, grill and headlights were all intact. The kingdom was desirous to have it back and at the start of 2020, Kabaka Mutebi wrote to President Yoweri Museveni informing him that the kingdom would prefer to have the car back. The president informed cabinet and they approved its release.

Prince David Kintu Wasajja who was heavily involved in pushing for its return to the kingdom was at hand to receive it from the Uganda Museum. Tourism ministers Tom Butime and Godfrey Kiwanda did the handover ceremony. Placed on a self-loading truck, its first destination was Bulange Mengo where Katikkiro Charles Peter Mayiga received it officially before it was tucked away at the Mengo Palace.

The BBC, coming from a country where royal vehicles from the 1930s and 40s are usually used by the queen and other members of the royal household was quick to interview him on their flagship Newsday programme on the plans he had for the vehicle. He assured them that the kingdom would leave no stone unturned in having the car working again.

Although one may wonder why would one be keen to recreate the past, it must be understood from the context of heritage. Having the palaces back, Butikkiro (official residence of the katikkiro), the Kasubi Tombs restored and now a car that is older than the majority of Ugandans among others symbolize the heritage of the people of Buganda.

In his floor to ceiling windowed office in Bulange from which he could see the Royal Mile, Mayiga started visualizing the Rolls Royce picking up Kabaka Mutebi from the Mengo Palace to open the Lukiiko in Bulange or attend such other functions. Leaning in his swivel chair, he dialed his longtime friend John Kiyimba popularly known as Freeman and penciled him in his diary for an appointment.

Freeman arrived at Bulange to be informed that there is yet another daunting task to execute and given his skills and commitment to things Buganda, he would be able to deliver it. The task was to refurbish the Rolls Royce and hand it to Kabaka on his birthday on 13 April 2021.

This was December 2020. Freeman was the chairperson of Ettoffaali, the famous drive that raised billions to restore the Kasubi Tombs, build Masengere and such other projects. Known for not shying away from such tasks, he accepted the challenge with open hands.

The two men then formed a committee to execute the assignment. Kampala businessman Godfrey Kirumira was appointed the Vice Chair, Steel and Tube founder and papal knight Joseph Yiga as the treasurer. Businessman and famous Rotarian Emmanuel Katongole was a member. Prince Wasajja and Mengo minister David Kyewalabye became advisors with Carol Nnaalinya working as the secretary.

The committee started looking for ways to restore the vehicle.

“We thought of shipping it to the UK for refurbishment but the first workshop we got asked for British Pounds 400, 000 (approximately Shs 1.9 billion), almost the base price for a new Rolls Royce,” Freeman says. “And they asked for two years. Yet our assignment was to be executed in six months.”

The assignment was never to buy a new Rolls Royce rather to refurbish the old one. Another workshop asked for British Pounds 300,000 or approximately Shs 1.4 billion. The cost was becoming a hindrance. The committee came up with yet another idea. “Why don’t we buy the same car model and bring it here and use the parts to refurbish the returned one? The resolution was unanimous,” Freeman recalls.

The search for the same car model began in earnest. Most of the cars available were being auctioned where the best bidder takes it all. The committee couldn’t compete. Such vehicles are bought by the ultra-wealthy for largely sentimental reasons. However, some online car marts had similar vehicles but they were being sold on average at British Pounds 200,000 or approximately Shs 920 million.

“We were stuck again,” Freeman remembers.

Then Freeman contacted his friend, Hajj Muhammad Mubiru, a car dealer in Kampala known for importing luxurious and high-end vehicles. He told him to work the phone with his contacts in the UK and US for a Rolls Royce Phantom V Cloud.

“Within three days, Hajj Mubiru had called back. He had found a stored vehicle, not in working conditions but had spare parts we could use. The total cost to Kampala without taxes was British Pounds 70,000 or Shs 321 million. As the committee, we immediately deposited British Pounds 10,000 (Shs 46 million) on it,” Freeman reveals.

Freeman made another trip to Bulange with a list of about 20 people he thought could easily contribute. Mayiga enlarged it to 40 and offered to host a high tea at Butikkiro, his official residence in Mengo. Within an hour of the event, all the money had been raised. Hajj Mubiru immediately shipped the vehicle.

Uganda doesn’t accept the importation of vehicles that are more than 15 years old. The Rolls Royce coming in was approximately 60 years old. Once it was offloaded off the ship in Mombasa, it was red flagged and put aside. It could only leave if the ministry of Works and Transport cleared it.

Mayiga reached the phone again to General Katumba Wamala, the Works and Transport minister and made an appointment. Armed with a letter from the Katikkiro, Gen Katumba received the Buganda delegation led by Owek Hajj Twah Kawaase, the first Deputy Katikkiro, together with Prince Wasajja and Freeman and presented their case. He immediately approved and asked his office to ensure the vehicle is cleared.

A few days later, the vehicle, needed for its parts, was in a bonded warehouse in Kampala. The Uganda Revenue Authority (URA) needed some approximately Shs140 million as taxes.

Mayiga wrote to Finance Minister Matia Kasaija for a waiver, copying in URA Commissioner General John Rujoki Musinguzi. The ministry of Finance agreed to waive off the taxes. Meanwhile, Freeman and his committee started searching for the technical team to do the refurbishment. “I called Farouk Lubega, my trusted long-term mechanic and asked him to examine both vehicles and see what could work,” Freeman reveals.

Surprisingly, the engine of the car that the kingdom had received from the government was still working, 55 years after the attack on the palace.

“The technology was now old but it was working. Lubega assembled a team that knows how to work on both old and newer technology vehicles,” Freeman explains.

The kingdom then got a secret location from which the team could work without the prying eyes of the public. The new deadline was now to hand over the vehicle on 13 April 2022.

“We were nowhere near done and we were going to miss the deadline. Luckily, Ssaabajja Kabaka was away in Europe which gave us a few extra months to work,” Freeman says.

The seats were refurbished and installed sample guards among other features. The Rolls Royce had power windows, and an air conditioning system that only pumped out warm air.

“We needed to convert it to one that can cool the car and this was one of the hardest bits of the job leading to overheating but we managed to fix it,” Freeman explains. “Then the car’s radio system was AM yet we are in FM era so we had to work on that as well,” he adds.

They then worked on aesthetics – painting it royal black while giving it a shiny trim. The Kabaka’s latest acquisition is powered by a 5000cc engine and a trip to Entebbe and back to Kampala consumes approximately 40 litres of petrol or Shs 264,000.

Once Freeman’s team was ready, they sought for approvals from the ministry of Works and Transport and URA and tested it to ensure it is safe on the road.

“We are very grateful to the leadership of those three institutions and of course the committee without which this work wouldn’t have been done,” Freeman says. “The kingdom treasury supported us enormously. We are very grateful,” he adds.

With two vehicles being turned into one, the kingdom now has enough spare parts for the Rolls Royce.

“We could may be even restore at least another Rolls Royce if we could find them since the kingdom possessed three at the time. We now have the expertise,” Freeman says. “Also, we realized that parts from Land Rovers can work well with the Rolls Royce,” he adds.

On Sunday 16 July as Kabaka Mutebi celebrated his belated 67th birthday at the Mengo Palace, the car was unveiled as his gift. Although he was wearing a face mask, Kabaka’s eyes gave away his mood—a happy and grateful king that at least yet something else from his father’s legacy is now available to the kingdom.

Before even the white silk cloth covering the vehicle was fully lifted off, Kabaka Mutebi was nonchalantly clapping and delightedly whispering to some of his closet officials, perhaps with nostalgia, recalling his childhood in the 1960s in his father’s limousine that was now at his disposal.