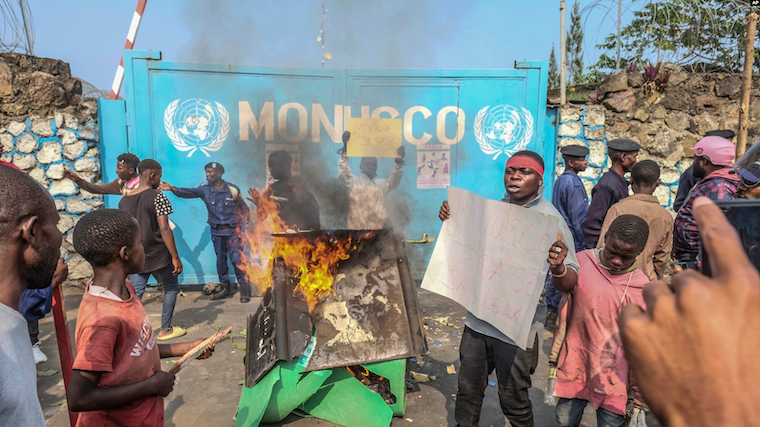 Protestors at UN base in Goma

A Democratic Republic of Congo (DRC) government spokesman Patrick Muyaya said at least five people were killed and 50 wounded during protests against a UN peacekeeping mission in the eastern city of Goma on Monday.

Muyaya announced the fatalities in a Twitter post on Tuesday, without saying who was responsible for the deaths or injuries.

The demonstrations began Monday when hundreds attacked and looted a UN peacekeeping warehouse in Goma, demanding that the UN mission, known as MONUSCO, leave the country.

In a Twitter post, MONUSCO condemned the protest, rejected protester accusations of causing chaos and instability, and vowed to help make progress towards stabilization and peace.

Local officials have called for calm but similar protests began Tuesday in Butembo — some 300 kilometres north of Goma — where the M23 rebels recently advanced.

0 #1 kabayekka 2022-07-28 03:38
Indeed it is good that the people of the Congo have come to realize that African problems need African solutions. It seems that even the Americans accepted to take this advice when at once they decided to leave the country of Afghanistan to the original people of that country!

The Ganda have a saying that pretty emphasized the British Protection of Buganda to end amicably; Omugenyi bwakyala akyaluka!
Report to administrator
0 #2 Zaitun 2022-07-28 17:30
"A Democratic Republic of Congo (DRC) government spokesman Patrick Muyaya said at least five people were killed and 50 wounded during protests against a UN peacekeeping mission in the eastern city of Goma on Monday."

Call a spade a spade. Is there really a UN peace keeping force in RDC, if so what are they keeping since Kabila father period, and where is the peace they are keeping?

The truth is that all these so-called UN forces are there enriching themselves with gold and diamond resouces as the countries sending them participate in open mining activities by employing poor people to do the mining at a peanut pay.

The two countries, RDC and Uganda do not belong to Ugandans any more. Kabila son came and left, leaving the Presidential seat to his brother-in-law, a man married to a Tutsi.

Congolese and Ugandans are doomed now; two countries under the influence and spell of Demons in the Great Lakes Region!!!
Report to administrator