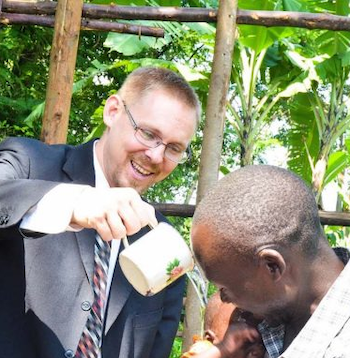 Eric Tuininga during his missionary works in Uganda

A former missionary pastor Eric Tuininga from Georgia, US who sexually assaulted a girl in Mbale, Uganda under his care has been jailed for 10 years by chief US district judge Marc T. Treadwell.

Tuininga, 45, who previously pleaded guilty to one count of engaging in illicit sexual conduct in foreign places will serve 120 months in prison, followed by a lifetime of supervised release and $20,000 in restitution to the victim.

In addition, Tuininga will have to register as a sex offender for life upon his release from federal prison according to the United States Department of Justice statement.

“I want to recognize the true bravery displayed by the Ugandan girl for speaking out when she was assaulted by a trusted person of power from another country, courageously seeking justice across continents,” said US attorney Peter D. Leary.

“Law enforcement – both abroad and here at home – took on a challenging international case. Homeland Security Investigations’ Child Exploitation unit worked tirelessly to ensure that the truth was uncovered and the defendant was held accountable for his crime.”

Another American national affiliated with the US-based Orthodox Presbyterian Church (OPC) operating in Mbale, eastern Uganda, contacted the US Embassy in Kampala in June 2019, to report that Tuininga, who was working as one of the group’s ministers, had had sex with the Ugandan female minor who was approximately 14-years-old.

US investigators identified the Ugandan minor who was approximately 14-years-old in March 2019 when Tuininga had sex with her as he was working as a pastor with the OPC.