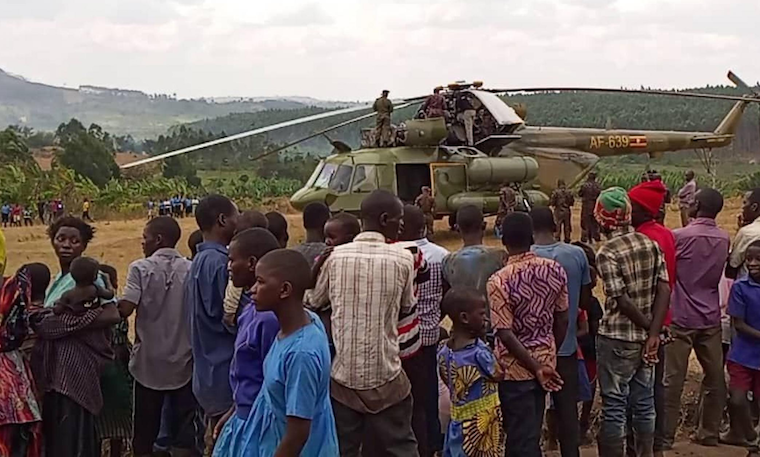 A Uganda People's Defense Forces (UPDF) chopper with nine soldiers on board today Tuesday made an emergency landing in Gomba district after developing a mechanical fault.

Witnesses say the military chopper landed at the community field at Nabukondo village, Banda town council at the border between Gomba and Mityana districts.

Residents say they saw the helicopter releasing smoke while in space before it landed in the field. The midmorning incident saw residents and school-going children in the nearby areas abandon their activities to catch a glimpse of the chopper.

One of the residents, who did not want to be named, said that he saw the helicopter struggling while in space, adding that it nearly knocked their houses as the pilot looked for a safe place to land.

Daniel Kasibante, a resident said the chopper nearly fell on the school before it landed on the ground. He says that soldiers scampered from the chopper and immediately started making calls.

Some of the residents said that they have never witnessed an aircraft landing in their area which is why they abandoned their activities to witness what was going on.

Hannington Ahabwe, a resident said that they thought they'd been invaded after seeing a chopper landing and immediately soldiers came out, which forced them into hiding. UPDF spokesperson, Brig Felix Kulaigye confirmed the incident, saying that the aircraft developed a mechanical problem that forced an emergency landing.