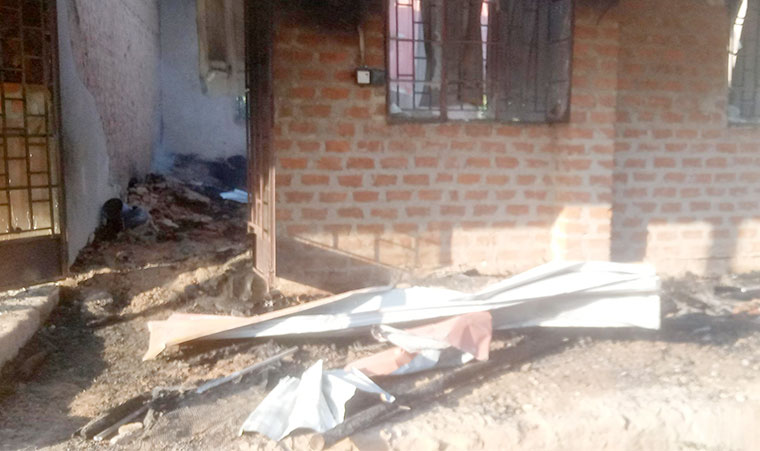 Fire has broken out at Mbarara View high school in Katete, Mbarara City South Division in western Uganda, and burnt all the property in the administration block. The administration accommodates the head teacher's office, which as doubles as the staff room, library, and store of the school.

Samson Kasasira, the Rwizi Region police spokesperson, says that the fire broke out around 3.00 am this morning. Kasasira says the police fire and rescue team from Mbarara city responded to the scene and extinguished the fire before spreading to nearby buildings. No injuries have been registered.

Anthony Mugura, the school director says that they suspect three students who they suspended last week for indiscipline to be behind the fire. According to Mugura, they suspended the students after receiving a tip-off that they were inciting their colleagues to strike. He revealed that the administration requested additional security personnel from the police, who spent a week at school until last night when they left.

Mugura says it’s unfortunate that the incident came the night the police left the school. This is the second fire incident in Mbarara. It follows another fire that gutted the boys' dormitory at St. Andrews secondary school Rubindi in Mbarara district last week, which destroyed students' property.

Kasasira says special investigations have been instituted to establish the real people behind the fires around the region and their motives.

+4 #1 Mubiru 2022-06-27 19:10
People monotonously talk of failed state they encountered on removing Amin. Untrue. A failed state is the present one when students daily burn schools to settle their assumed grieves.

A failed state is when armed robbers share identical uniforms with all security bodies and Rob, kill Ugandans with impunity. Amin eradicated such bandits by shooting them on the spot.

A failed state is where the few well connected and most come from the same region area, village or family steal steal public funds unknown in Amin,s era and use ithem among many evils to steal the land etc of those coming from the despised and oppressed areas.