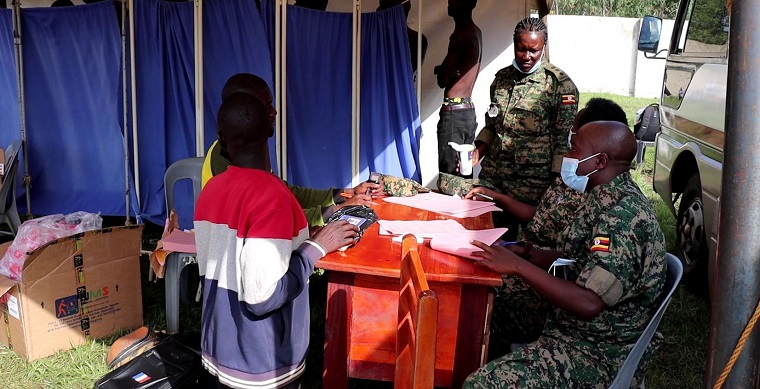 The recruitment exercise failed to hit the target

The Uganda People’s Defense Forces (UPDF) recruitment team in Lira has failed to meet its target after a high number of the applicants tested positive for sexually transmitted diseases (STDs).

The two-day exercise was targeting 495 recruits from the districts of Amolatar, Alebtong, Otuke, Dokolo, and Lira. However, only 299 applicants passed the test.

The applicants were subjected to written and physical exercises including a five-kilometre run and medical tests for high blood pressure, hepatitis b, HIV and other STDs like syphilis and gonorrhoea. Those found to be positive were automatically disqualified.

Steven Mugerwa, the recruitment team leader in Lira says the general turn-up was high but most candidates, especially females were disqualified after they tested positive for different illnesses, mostly STDs. Only 44 female applicants passed the test at the end of the exercise on Friday evening.

"Although the number was big, we were challenged but we managed them. Many people here have been disappointed - with different diseases like gonorrhoea, syphilis, hepatitis b and others which we found in them. So I am appealing to people, let them go and check themselves and they know their status, let them continue with drugs, next recruitment they will come back and we shall recruit them," said Mugerwa.

Other candidates were disqualified on grounds that they have fake academic documents, had physical disabilities and were of advanced age. Mugerwa is, however, concerned that despite the disqualifications, fewer females are generally showing interest in joining the force.

"The turn up of women was very small. And the ones who turned up were affected by very many diseases. The target was 59 per cent," he added.

But Winifred Constance Akello, a secondary school teacher who graduated from college early this year, believes that the process was not fair because she was disqualified even without checking her academic documents.

Kizito Edola, a resident of Dokolo also missed the chance because he arrived late at the recruitment venue while Peter Odongo, a resident of Lira district was disqualified because there is a mismatch in his date of birth on the national ID card and academic documents. Successful candidates have been transported to Kaweweta Recruit Training School, in Nakaseke district.

+4 #1 kabayekka 2022-06-25 17:43
It is another avenue by the military NRM to waste tax payers money. Most wiser countries have a national law for all the country' s youth to be encouraged to join the country's army for two years.

Afterwards they can leave to resume their civilian lives. This business of selection does not make any sense. The army facilities can treat the sick youth.

These army facilities can educate more of these youths. There is no need to keep army personnel for years until retirement age! African politicians must stop this un patriotic business of owning the national army institutions and using them for their own personal ends. This wrong seems to be the normal way of doing things in this country for 60 years and counting.
Report to administrator
0 #2 Akot 2022-06-26 17:54
kabayekka, thanks.

It's the people who must ensure they are well governed in real democracy, but this isn't so in Africa!

Even Tunisia, Egypt, Sudan, DRCongo, Algeria...that UNITED to end dictatorship, didn't have the right leadership to give a beginning to real governance!

Tribally divided ruled Ugandans have no chance to anything & going for fake elections only protect & bolster Museveni!

Is it true the candidates have STD, or is it means for Museveni to ensure his army is not filled with people he doesn't trust?

Idi Amin killed his cousin & band of Sudanese he believed wanted to overthrown him!

As long as Ugadans are powerless tribally divided ruled, Museveni is the boss, owner of every tribal land!

Yet, what will the situation be when Museveni dies of old age with no plan for AFTER him, except his son replacing him?
Report to administrator
0 #3 Akot 2022-06-26 18:19
Why are Ugandans alrignt with +36 years of colonial Museveni & are helping him refresh his army to ensure their enslavement?

USA/UK/EU MUST save the world by walking out of UN & forming a real humane body!

Why are EU states still in UN when they reject Turkey that is not in conformity with EU democratic principles?

EU is ensuring Ukraine... fill forms to ensure it will abode by EU democratic principles or will not be accepted as member!

So, why is EU still member of UN that is alright with dictators, self-styled gods causing wars, migration, that turned USA/UK/EU politics in mess?

Why will developed world go for next UN meeting that Putin, Museveni, Kagame, Jinping, Erdogan...are waiting for to make their stand as masters fo the world?
Report to administrator