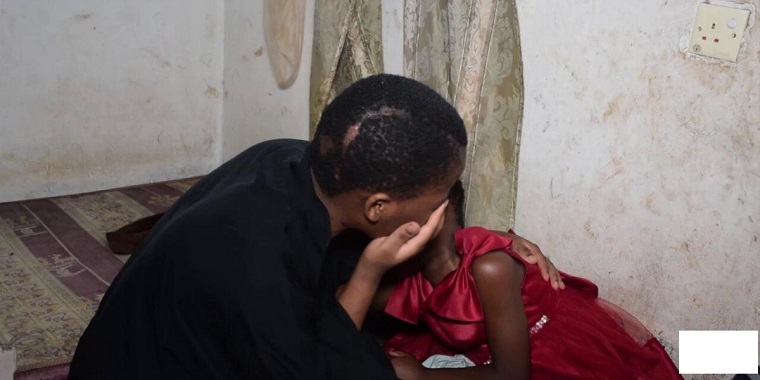 Rashidah Nampijja with her daughter

Rashidah Nampijja,21, a former housemaid in Saudi Arabia, is battling for her life in a rented room in Nabuti cell in Mukono Central Division, Mukono Municipality. Nampijja developed serious body complications in Saudi Arabia before she was returned home.

Her family intervened after a short video showing Nampijja in bad shape recorded by a good Samaritan went viral on social media. The video showed Nampijja with cuts on the head and swollen stomach crying in great pain. The person who recorded the video was suspicious that Nampijja could have been a victim of organ theft.

When the video reached her family, they immediately contacted Horeb Services Limited, which recruited her to process her return. Upon her return, Nampijja reunited with her mother, Hajarah Nakanwagi who is currently staying with her in a single rented room in Mukono.

Nakanwagi explains that her daughter left for work in Saudi Arabia in December 2021. She, however, says that she was surprised to see a video circulating on social platforms showing her in bad shape.

Nakanwagi explains that although the recruitment firm worked on the safe return of her daughter, it stopped supporting her treatment yet they still don’t know what she’s suffering from. She explains that upon Nampijja’s return, Horeb Services Limited took her for medical examination at Mulago national referral hospital and concluded that her kidneys were intact despite the huge cut on her stomach.

Nakanwagi says they were never given chance to look at the medical forms. URN visited Nampijja’s home and found her yelling in pain while lying on a mattress inside their tiny rented room. Her four-year-old daughter couldn’t help seeing her mother wreathing in pain while a two-year-old boy who seemed not to understand the situation just looked on.

Although Nampijja tried to recall what happened to her in Saudi Arabia, she has still failed to connect the dots. She recalls losing consciousness in the house where she was working in Dammam City and regained her memory in the hospital to see cuts on her head and the stomach.

According to Nampijja, she again lost consciousness because of the crying and pain and only regained it at the Dammam Deportation Center where the video detailing her condition was recorded to reach her parents. She finds it hard to eat or drink anything and cries in pain whenever something reaches her stomach. Her family has run out of money to finance her treatment.

Ezra Mugisha, the managing director of Horeb Services, couldn’t be reached for comment. His known cellophane number is off. Nampijja is just one of the many Ugandans who left the country to work abroad and ended up in deep trouble.

+4 #1 masembe 2022-06-22 14:04
This is really horrific. What really went wrong? The office is accountable and knows her former employees.
Quote | Report to administrator
+6 #2 Jama 2022-06-22 15:37
This is a kind of modern slave trade created by a regime which has failed to create a decent living condition for the population.

A regime which is evasive and unaccountable to the population, given it's oppressive character.
Quote | Report to administrator
0 #3 kabayekka 2022-06-23 12:08
Jama indeed you have got a point. This is an African government that cannot get anything right.

Saudi Arabia is one of the richest countries in the world. It is able to provide or pay for Uganda's medical advancement. It is able to help modern industry come up for Uganda and Saudi Arabia so that cheap labour is no more. Unfortunetely these are countries embedded into modern tyranny of governance It is a very unfortunate economic spectacle indeed.
Quote | Report to administrator
+1 #4 Zaitun 2022-06-23 15:57
What we never expected to happen to innocent Ugandans is now here! Ugandans getting killed here in their own country, outside the country where deals have been signed on their heads and body parts ready to be harvested as spear parts for the devils.

Those who claim to be looking after people's welfare so that they live better lives are all aloof but on the contrary wish us death by selling our children out in a modern slave trade market!

If nothing happened to this young lady, how comes Ezra Mugisha, the managing director of Horeb Services can not be reached for comments?

These guys know why they send all these girls to those notorious Arab countries which in the 17th and 18the centuries caused havoc in East Africa, raiding our great grand parents to be sold in slavery.

Today, the Yao have been replaced by the Mugishas and their hench men to depopulate Uganda of her citizens so that they achieve their plans!!.
Quote | Report to administrator
0 #5 kabayekka 2022-06-25 18:09
Saudi Arabia a very rich country is a very notorious country the way it has bombed it's neighbouring country of Yemen.

Every Friday afternoon it pulls out human beings and cuts their heads off to clean their sins before God! It is a country that gave comfort to the brutal and genocidal African President of Uganda instead of handing him over to the United Nation International judiciary. Indeed not much can be expected from such a country on the world issue of human rights!
Quote | Report to administrator
Refresh comments list
RSS feed for comments to this post
Add comment