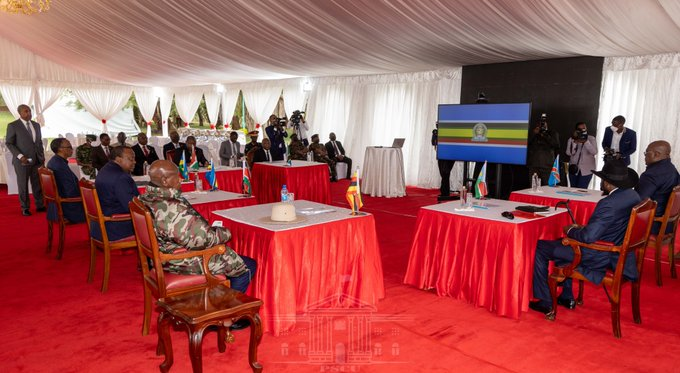 Heads of state of the East African Community (EAC) have directed the regional armies to immediately deploy in the Democratic Republic of Congo against the armed groups there.

At their conclave, Kenya's President Uhuru Kenyatta presented a brief on the political track of the Nairobi process which detailed actions and activities that have been undertaken since the convening of the last conclave. These included the holding of consultations with various armed and rebel groups within DRC as a follow-up to the consultations undertaken by DRC with the rebel groups in Nairobi.

The EAC conclave in Kenya was attended by all the seven heads of state except Tanzania which was represented by the High Commissioner to Nairobi. The heads of state directed that "an immediate ceasefire be enforced and cessation of hostilities commence immediately, including withdrawal from recently taken positions."

Earlier, DRC officials were quoted as welcoming the idea of a regional force deploying there, if only it didn't include Rwandan soldiers, as the two countries accuse each other of supporting rebels across the common border. The conflict in the country intensified in March 2022 and last week, as one of the rebel groups, M23 overran Bunagana town at the border with Uganda.

The rebels accused the government forces there of attacking their positions first, prompting them to fight back. Early last week, the M23 leaders also accused Kinshasa of ignoring their calls to respond to their concerns and vowed to fight on till they're listened to.

"Democratic Republic of Congo government knows our requests and no feedback yet," said M23 spokesperson Maj Willy Ngoma. "We shall keep capturing different parts of the country including Goma city because our soldiers are ready to fight."

It is not yet clear if the rebels and other fighting groups in the region will accept to disarm as directed by the heads of state. In a communique issued after the meeting, the presidents called on all the warring parties to fast-track the peace process for the sake of peace for the people.

"In doing so, the political process should be intensified by all parties in order to allow the citizens of the DRC feel safe and secure and be able to pick up and continue their respective social, cultural and economic activities," it reads in part.

The leaders also "agreed and reinforced that trust and confidence-building, cessation of hostilities, unconditional ceasefire, participation in the political processes in the country, are the key issues that need concerted, urgent and durable resolution."

Other critical issues named are prioritization and participation in the country's development, citizenship, presence of foreign negative elements, the fate of combatants during reintegration and status of refugees and internally displaced persons, as requiring concerted, urgent and durable resolution.

The heads of state also directed an end to all they called offensive language, hate speech, threats of genocide "and other politically inciting language" which must be discouraged by all parties.

"The people of the DRC must be encouraged to work together in order to stabilize the eastern DRC for it to prosper," the leaders concluded.

The presidents were also briefed by the chiefs of defence forces in the seven countries who had just ended their consultations a day before. The brief defined the problem and highlighted the threat analysis, the concept of operations, status of forces agreement, rules of engagement, and other legal and technical regulations to facilitate the operationalization of the regional force and its various operational arms.

The presidents accepted and adopted the brief by the army chiefs for immediate implementation, and directed that the regional force should in cooperation with the military and administrative forces of the DRC, seek to stabilize and secure the peace in the country.

"The regional force should also cooperate in the implementation of the disarmament and demobilization process."

The force will be constituted as an East African Community force under the EAC Protocol on Peace and Security and the EAC Treaty Article 124 on regional peace and security and Article 125 on cooperation in defence.

Yet, it's these dictators/inhuman rulers; Museveni, Kagame, Putin...have people at their mercy while developed well governed countries' leaders are in trouble & never have time to solve world problems as they are replaced every 5 years, while Macron who got second 5 years term has already congratulated Museveni & said he's looking up to Total to help get out Uganda oil!

Boris Johonson had to call for early election to ensure his 5 years & still is in trouble for just having a glass of drink with officials, when all were vaccinated!

But all UN want is not GOOD GOVERNANCE, but dirty money through migration caused by dictators, useless rulers!
Quote | Report to administrator
0 #12 Lysol 2022-06-21 22:48
Zaire, aka DRC is domed to balkanization, because those who wanted it are now the leaders of the Western Powers.

When all eyes are turned to the war in Ukraine, those bent on splitting the Congo are taking the advantage, due to the naive and the weakness of the leaders of Zaire/DRC.
Quote | Report to administrator
+1 #13 Kalibbala 2022-06-21 22:50
Recalling the 1983/4 Peace Jokes held in Nairobi under the Courtship of the late Daniel Arap Moi, The same person clad in Military attire calling himself The Curse, Kisiraani and Enemy of Humanity was Playing his Double Slaying Sword by signing the Peace agreement while Continuing with Killing Innocent Ugandans ! 40 Years Down the Road,He has succeeded to Outsource his Killing Machinery to Rwanda 1.000 000 Dead and DRC Congo where Uganda's M23 Terrorists and ADF have been Active For 25 Years looting Resources!!

It is a Joke that Countries like Kenya and Tanzania with their Knowledge of affairs happening to be part of this Nonsense! Please Deploy in DRC and Flush out The Ugandan and Rwandese Terrorists!! No Congolese has ever Invaded Uganda!! STOP THIS STUPIDITY! Neo-Colonialists are Employing their Cohorts Kisiraani and Kagame to Colonize the Great Lakes Region!! FIGHT!!...
Quote | Report to administrator
12
Refresh comments list
RSS feed for comments to this post
Add comment