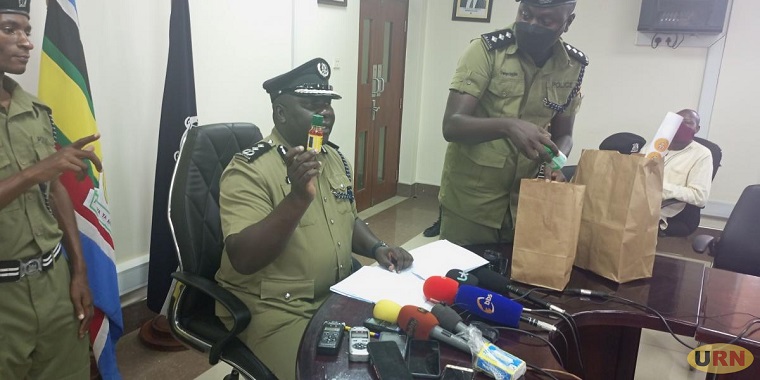 The four have allegedly been making deliveries in schools in Kira-Municipality in Wakiso district, Bugolobi, Kulambiro, and other parts of Kampala district. Trouble for the suspects started over the weekend when one unnamed school suspended ten female students in Namugongo who had ordered the drug-laced cookies for a party at the school.

"The school management alerted police and our officers from the anti-narcotic department from Criminal investigations Directorate - CID together with ordinary police swung into action and arrested one of the suppliers who led police to her accomplices in Kungu-Kira municipality where they had a factory," Enanga said.

Police have since recovered suspected drug substances the suspects have been using to make cookies, pancakes and other foodstuffs.

Enanga explains that the four suspects currently detained at Jinja police station will be charged with drug trafficking, and being in possession of narcotic substances among other charges.

Assistant commissioner of police Tinka Zarugaba from the anti-narcotic police department explains due to the fertile soils and good climate in Uganda, there is a worrying increase in the number of people growing cannabis in all parts of the country, which may fuel drug addiction.

According to Zarugaba, the latest research conducted by the police anti-narcotics units in collaboration with Makerere University shows that 16 per cent of youths in urban areas are under the influence of drugs, which is disastrous to the country.

“There is a need for everyone to participate in the fight against drug trafficking as its impacts would be irreversible by now, instead of just condemning, Ugandans should start telling their children about the danger of drugs to children when they are young," he said.

Fred Enanga has called on schools to stay vigilant because the indirect consumption of drugs among children is on the increase.

"This is dangerous because these suspects have been targeting young children between 13-20 years in high school, we’re calling upon school administrators, parents, and guardians that this is now the indirect way of children consuming drugs, and once our young children are recruited into consuming drugs, it’s a danger to society," Enanga noted.

That seems to be paid handsomely by the KCCA. Is it true that the KCCA had given this cottege food making factory an urban license at the Muluka level?
Quote | Report to administrator
+1 #2 Batamba Peter 2022-06-21 12:55
Now this is complete decadence....
Now those food samples should be taken to the Government Analytical Lab for further analysis to rule out the possibility that these Ugandan thugs vending the snacks are actually killers...

If I were the head teacher of the schools where these individuals were selling the items, i would immediately stop any vendor from selling any food items to the children...We parents shall hold those schools responsible if such a deadly incident should happen again.
Quote | Report to administrator
Refresh comments list
RSS feed for comments to this post
Add comment