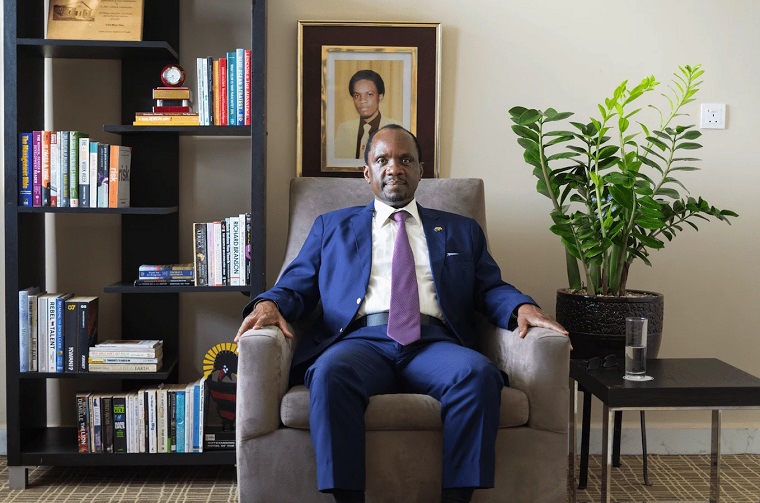 The High court in Kampala has dismissed with costs an application by Kampala businessman Patrick Bitature for a temporary injunction to restrain his creditors of M/s Vantage Mezzanine Fund II Partnership from selling, alienating, disposing of, taking possession, or any action against his properties.

On May 18, the Daily Monitor newspaper advertised the sale by public auction properties belonging to Bitature for failure to meet his debt obligations. This arose from his failure to pay the $32 million he owes to the South African-based entity. The advertised properties included Elizabeth Apartments at Kololo, Protea Hotel-Naguru (Sky’s Hotel), and Moyo Close Apartments. In 2014, Bitature secured a loan of $10 million from Vantage, which he was supposed to pay back starting in 2017.

However, following a May 9, 2022 ruling by High court civil division judge Musa Ssekaana that Vantage had no right to sue anybody since it was not registered as a partnership in Uganda, Bitature decided to sue its lawyers directly. In his application, Bitature who is represented by Fred Muwema and Muwema Co Advocates & Solicitors argued that their main case before the High court had a very high likelihood of success considering Vantage is non-existent.

The respondents in the suit include Robert Kirunda and Noah Shamah Wasige, the lawyers of Vantage, Festus Kateregga, a court bailiff from Quickway Auctioneers and court bailiffs that advertised the properties and the commissioner Land Registration.

In their response, Kirunda and Wesige argued that the application brought against them was misconceived as it is against persons acting as agents of a known and disclosed principal. They also reasoned that considering that the suit seeks to challenge the legality of a mortgage and notices issued under it, which issues are already before an arbitrator, the court had no jurisdiction over the matter and therefore, there was no likelihood of success.

“The application constitutes an abuse of court process by re-litigating a matter over which the court has already made conclusive pronouncements. The application and the underlying suit are founded on a misinterpretation of the court decision which only declared a lack of capacity of M/s Vantage Mezzanine Fund II Partnership to sue, but never declared the said entity non-existent as contended by the applicants,” Kirunda and Wesige’s affidavit reads in part.

It adds that the fact that Bitature has publicly issued a statement acknowledging the debt he has with Vantage, advertising his properties for sale on account of default in repayment, is incapable of embarrassing and irredeemably damaging his name and business reputation.

In his ruling, Mubiru held that the decision by justice Musa Ssekaana that found that Vantage had no right to sue was misconceived because the issue before him was to determine whether the Uganda Registration Services Bureau’s [URSB] refusal to register a transfer of shares in Bitature’s company in favour of Vantage was legal. Justice Mubiru held that when justice Ssekaana allowed Bitature to join the URSB case, he erroneously permitted the ventilation of private rights in a process that is intended to address public law issues exclusively.

“It is apparent from the above extract that expressions made relating to the existence or otherwise of M/s Vantage Mezzanine Fund II Partnership are not part of the ratio decidendi but rather constitute obiter dicta. When a judge delivers a decision in a case, the judge outlines the facts which he or she finds have been proved on the evidence. Then he or she applies the law to those facts and arrives at a decision, for which the reason is stated. The judge may go on to speculate about what his decision would or might have been if the facts of the case had been different. This is an obiter dictum. The comments, suggestions, or observations made by the trial judge that was not necessary for resolving the application, as such, are not legally binding on other courts. The binding part of a judicial decision is the ratio decidendi. An obiter dictum is not binding in later cases because it was not strictly relevant to the matter in issue in the original case,” Mubiru’s 21-page ruling reads in part.

It adds that the judge also erred in finding that Vantage had no right to sue because it was never a registered partnership in Uganda as required by law.

“It could not have been the intention of parliament in legislating section 4 of The Partnership Act, No. 2 of 2010 that all firms digitally and remotely carrying on business, without a physical presence in Uganda, but under business names that do not consist of the true surnames of all partners who are individuals and the corporate names of all partners which are corporations in the partnership without any addition other than the true first names of individual partners or initials of the first names; and the corporate names of all partners which are corporations, should register their name under The Business Names Registration Act. To hold otherwise would create an absurdity in the wake of the modern exponential growth of global digital businesses with increased international business relations, cross‐border transactions, and mobility. It would be an absurdity if all foreign firms engaged in such transactions are to be required to engage in multijurisdictional recognition before they can undertake enforcement efforts for the collection of debts,” the ruling reads in part.

Adding that "for any judge to determine whether or not a foreign business organization, be it a corporation or firm, is carrying on business in Uganda, he must inquire into whether that entity has some direct or indirect presence in Uganda, accompanied by a degree of business activity that is sustained for a period of time."

Justice Mubiru says Ssekaana didn’t have all the facts that support the conclusion that Vantage doesn’t have the capacity to sue on grounds that it is not registered in Uganda.

“I find myself unable to follow his decision, most especially considering the fact that it is not binding on me. The High court is bound by decisions of the Supreme court, the Court of Appeal, and the Constitutional court, but is not bound by other High court decisions. In any event, a decision which is reached per incuriam is one reached by manifest slip, error, or glaring mistake, such that some part of the decision or some step in the reasoning on which it is based is found, on that account, to be demonstrably wrong and therefore can be avoided. Having found that this specific factual finding of my brother judge is not evidence-based, and more so, it is not entitled to deference as a precedent binding on this court, I respectfully depart from it and find that there was no basis for counsel for the applicants to have chosen to file a suit intended to enforce what they considered to be a declaratory decision in that ruling,” Mubiru said.

He also reiterated his earlier ruling in which he bashed Muwema for suing Vantage lawyers for undertaking their lawful duty of representation. He said suing advocates is an affront to the right to legal representation.

“Advocates should be able to practice independently and in freedom…advocates should not suffer, or be threatened with suits, prosecution or administrative, economic or other sanctions for any action taken in accordance with recognized professional duties, standards, and ethics,” Mubiru held.

In the previous case decided about three weeks ago, Mubiru condemned Muwema to personally being liable for costs for misadvising Bitature to personally sue lawyers. The judge also implored Bitature and his lawyers to disabuse themselves of the view that Vantage doesn’t legally exist.  This he said is what motivates them to file vexatious applications suing people they shouldn’t be suing.

“It appears to me that the applicants are labouring under an honest but mistaken belief that it was decided by the civil division of this court in High court…that M/s Vantage Mezzanine Fund II Partnership does not exist. The failure to disabuse themselves of that misconception has clouded their judgment so deeply that they have gone to great lengths to avoid any stance that has a semblance of recognizing the existence of that entity,” Mubiru said.

He noted that he found the application and the underlying suit to be entirely misconceived on account of the fact that they were instituted against agents of a known principle and that there is a properly constituted arbitral proceedings on the same matter.

“This court had on two occasions before, already declared that it will not exercise jurisdiction over the matter in light of the submission to arbitration that is valid, binding, operative, and enforceable…In the result, I found that a prima facie case had not been established. There were no serious questions of law and fact to be tried by this court to justify the grant of a temporary injunction…”

12
0 #11 sn 2022-06-21 10:31
Honestly speaking, why should anyone borrow money from somewhere, build an apparently successful business empire, then rather than honouring the obligation to pay back, instead looks for ways of legally wiping out the debt?

Behaving as if the debt didn't exist, basically telling the world that actually the money was stollen not borrowed! On a successful stealing mission, everything possible was to be done to close any possible leads to the theft.

This guy is a thief by demonstration. He even talked of a name he didn't deserve. He has no name to protect. He is no better than a chicken thief.
He should pay and go to jail.
Quote | Report to administrator
12
Refresh comments list
RSS feed for comments to this post
Add comment