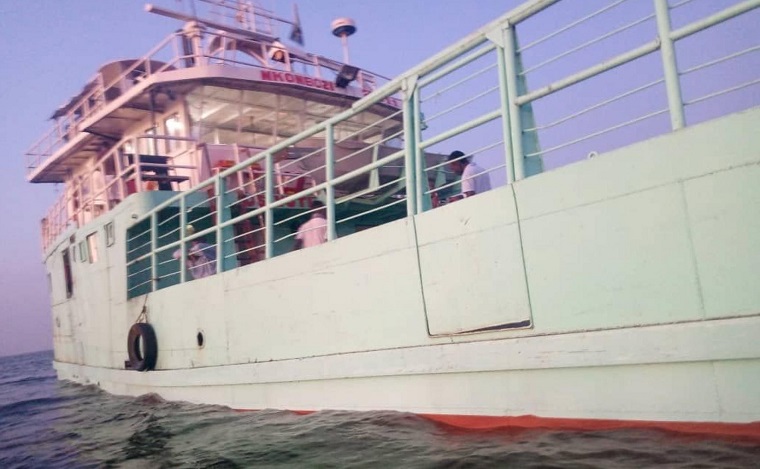 A Tanzanian water vessel, MV Wankyo which usually carries cargo from Uganda to Mwanza in Tanzania, got stuck on Lake Victoria for almost a day after it broke down on Saturday.

Dennis Busuulwa, the Gombolola internal security officer (ISO) in charge of Bubeke sub county in Kalangala, says the vessel departed from Port Bell at around 4 am on Saturday but as it approached Kawafu landing site in Bubeke, one of it's engines stopped working. Busuulwa with a team of police officers attached to Bubeke police post boarded a boat to access the vessel on Saturday afternoon.

"The captain told us that there were seven people on board, who were all crew members since the vessel usually carries only cargo. He also said one of the engines got stuck and they had to stop where they were as they wait for another vessel from Mwanza to pull MV Wankyo on Sunday," says Busuulwa.

Charles Kalemba, the LC 3 chairperson of Bubeke sub county, says fishermen informed him about the vessel around mid-day.

"I also saw that the vessel was not moving when I was heading for an engagement around 3 pm. When I returned at 8 pm, I found the vessel in the same place. So I got curious and asked some of the people on board whether they needed help and they told me that they would get help the next day. They also added that some security officers had interacted with them around 4 pm over the same issue."

Kalemba says the vessel has now been pulled away from Bubeke sub county by another vessel that arrived on Sunday morning.

"We were scared that the vessel might sink since there are strong winds which form large waves over Lake Victoria at the moment. These winds are very strong from April to June every year so sailors and passengers must be careful because boats and vessels can sink if they get problems like engine failure or engines getting stuck in fishing nets," Kalemba says.

Busuulwa also confirmed that MV Wankyo has now left Bubeke and will be pulled up to Mwanza for assessment and repairs. Tugs or tugboats are usually deployed to pull or or push water vessels that cannot move on their own because of different reasons including engine failure and stuck in crowded or narrow canals.

This incident comes a month after a boat, with nine passengers, capsized on Lake Victoria. The incident happened on May 4, 2022 and all the passengers survived. The boat departed Kasenyi landing site in Katabi town council on a Wednesday afternoon with traders heading to Kisaba landing site in Kalangala.

Operators of water vessels are expected to ensure everyone on board uses life jackets. The Uganda National Meteorology Authority (UNMA) weather forecasts indicate that there will be strong winds over Lake Victoria from April to July this year, and as such, water transport users must wear life jackets.

Gen Katumba Wamala, minister for Works and Transport, recently said the ministry will work in conjunction with marine police, army and other agencies to enforce mandatory use of life jackets on water bodies.

He also says the creation of a National Aeronautical and Maritime Coordination committee will ensure search and rescue operations on water bodies are no longer "ad hoc" as in the past, where it is fishermen and local communities that spearhead such missions and sometimes mess up or fail because they lack equipment and skills for safe evacuation of survivors.