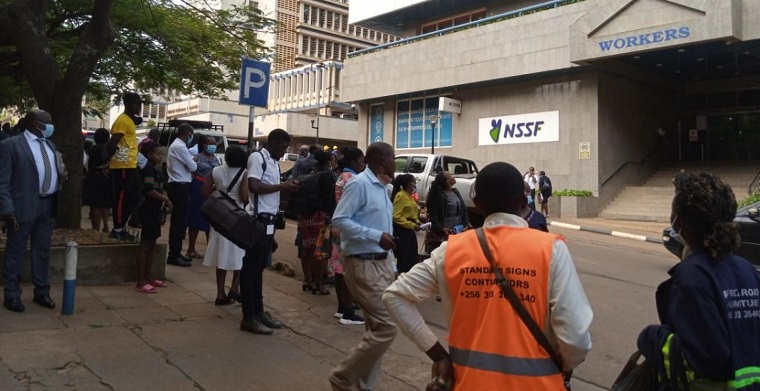 There was panic at Workers House on Monday evening after a fire alarm went off shortly after the signing of an MOU between the office of the Director of Public Prosecutions (DPP) and the United Kingdom High Commissioner to Uganda Kate Airey to establish a virtual academy for prosecutors.

The MOU followed a request by DPP’s office to the UK government for technical assistance to design and deliver an online platform for prosecutors to build their capacity in order to effectively and efficiently manage criminal matters. However, the fire alarm went off while officials were entertaining questions from the media, sending panic amongst the attendees.

This prompted the DPP, Jane Frances Abodo to apologize and order whoever was in the meeting on the 12th floor to vacate the building using the stairs. Security officers immediately evacuated the DPP and the UK officials. The remaining people also vacated the 14-floor building via the stairs.

There was utter confusion on the stairs as people including expectant mothers and guests who had come to various offices ran for their lives and assembled in front of the building to ascertain what was going on. Later, a man wearing a reflector jacket branded Workers House Fire Marshal told the dozens of people who looked scared that one of the capacitors of the fan on the ninth floor had burnt but didn’t affect anything.

Some security personnel told URN that the fire alarm was triggered by burnt wires in the air conditioning systems on the 11th floor. The security later told the people who were gathered outside to return to the building.

The fire scare has come at a time when the country has registered several fire outbreaks mostly in schools and offices without any conclusive report.