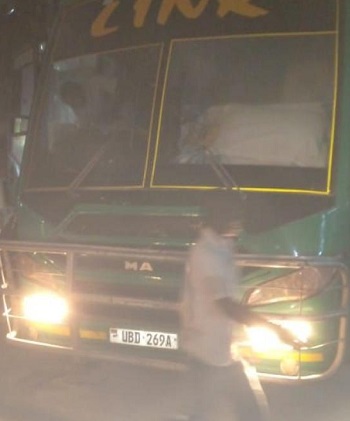 The Link bus that caught fire

Days after government lifted the suspension of activities of Link Bus, another of the company's coaches has been involved in yet another de trop safety situation. A Kampala-bound Scania bus registration number, UBD 269A that was returning from Kasese caught fire at around 10.00pm at Wakaliga traffic lights in Kampala.

Luke Owoyesigyire, the deputy Kampala Metropolitan Police spokesperson, said that "Our fire prevention and rescue services officers responded on time, fortunately, the fire had been extinguished by other first responders using a nearby fire extinguisher, water, and sand." According to Owoyesigyire, all the passengers escaped unhurt and no properties were lost.

He explained that preliminary police investigations attribute the fire to a short circuit in one of the headlamps. About two weeks ago, the ministry of Works halted the operations of Link buses following a lone accident that claimed 21 people and left several others with injuries involving link bus registration number, UBA 003S.

The bus overturned at Ssebitoli, two kilometers from Fort portal city along the Fort Portal-Kyenjonjo road. While lifting the suspension, the minister of Works and Transport, Gen Edward Katumba Wamala, said that they had fully inspected the buses and found them fit to resume operations.

However, police say that the bus that caught fire yesterday didn't have fire extinguishers on board.

"Our officers from the fire prevention and rescue services have noted that the bus had no fire extinguisher of its own. We advise all bus operators to have the fire extinguishers in place in case of a fire emergency," Owoyesigyire noted.

The 2021 crime report by the Directorate of Fire and Rescue services indicates that 1,258 fire incidents were registered compared to 1,013 fires recorded in 2020. Police attributed 272 incidents to negligence and another 186 short-circuiting.

In most countries, life and vehicle insurance payments from such questionable accidents are astronomical.

It is a real deterrent from such small time transporters(business crooks) who continue playing about with people's lives in African countries where even the most powerful in government own such scrape yard vehicles.

These rich owners are the ones who are preventing any safe and modern mass transportation to develop in this country.

Here in this country, it seems the dead are quickly buried and it is back to normal business as usual! And the URA continues in its pursuant to gain big money from such murderous business enterprise.
Report to administrator
+2 #5 rubangakene 2022-05-20 00:24
This transport docket is very complicated for this present Minister. He should be replaced temporarily by a transport specialist from our many Universities so that things are streamlined.

You see, being a minister is not about signatures, so to speak; it invoves background knowledge or other transferable skills (which unfortunately this guy doesn't have). Next time it will be an aircraft lost, at this rate!
Report to administrator