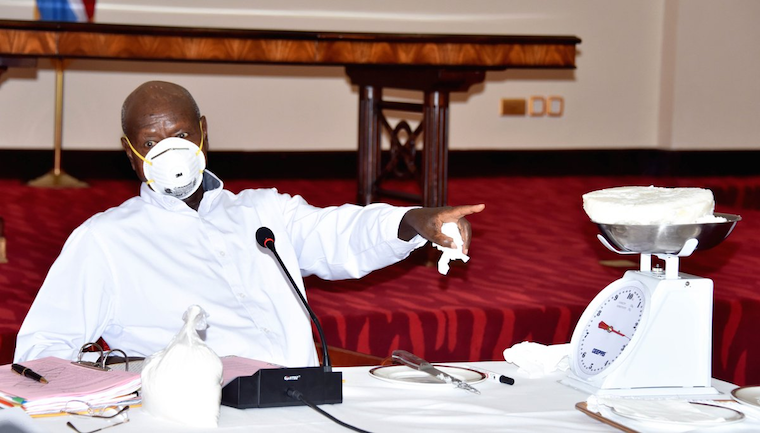 During this year's International Labour Day celebrations at Kololo Ceremonial Grounds, Museveni lashed out at Ugandans for crying over the high commodity prices, saying that they have several local and cheaper choices to make.

The president noted that those who cannot afford bread should eat cassava instead. Amidst ululations, cheers, and hand claps from the congregation in his Sunday homily at Holy Rosary Church, Fr Uma, said that the president's statement is not welcome - noting that it is an indication of not being mindful of the suffering people .

Uma warned leaders to refrain from such utterances, adding that such statements have led to uprisings and caused the overthrow of governments in the past. Uma was relating to the 1789 French Revolution, which was prompted by the high commodity prices and subsequent utterance by the Queen of France Marie Antoinette who said that the people should eat cake if they cannot afford bread.

"It made people angry, they started protests and ousted that government. Here see the prices of fuel have gone high. Who owns the filling stations? They are the top government officials. Previously we had fuel reserves but now we don't have them. This means that we don't love Ugandans," Uma noted.

He urged the government to focus on addressing the plight of the people and stop wasting public resources such as the money being used to throw lavish birthday parties for the president's son Gen Muhoozi Kainerugaba.

Turning to the bid of Andrew Ojok to replace his father and former speaker of parliament, Jacob Oulanyah as Omoro county MP, Uma said it sets precedence for a monocratic leadership in the country.

He also urged religious leaders to deviate from taking political sides but serve the suffering and needy people. In March, Uma warned that the church will mobilize the masses against the government if the high commodity prices are not addressed noting that it has caused hardships.  In Gulu city, comedians and actors have taken to acting to portray the dire situation relating to the high prices.

In one play ‘’Keny Moo Dek’’ translated as "Cooking Oil Affairs", the actors, Brian Lapir and Peter Akena alias Bouncer Word Paibona won the heart of one Sharia Ajok alias Oven with a quarter litre of cooking oil and a piece of laundry soap which Oveni said she could not afford yet they are basic necessities.

Prices of essential commodities like soap, cooking oil, salt, maize flour and sugar among others have been steadily increasing in the past two months.

History repeats itself this time around, but this time in Uganda under the leadership of the foresighted revolutionary leader, Museveni.

Was it not the phrase: If the French can not eat bread, they should eat cakes that caused a far reaching French revolution of 1789?

If I can understand it well, this ka-Museveni wants a revolution which Ugandans have failed to understand. He knows he has done nothing tangible for Ugandans but is kindly asking us to chase him by force!

It is high time we Ugandans understand what these guys want us to do.
Report to administrator
+3 #2 Lakwena 2022-05-16 12:12
In other words, thanks Fr. Uma for coming out in broad-day- light, to speak out on behalf of the voiceless and condemn the "Social Injustice" being prsided over by Gen Tibuhaburwa who on 26th January 2017, had already told off Ugandans that he is neither their servant nor employee.

Otherwise, when his son, Gen Muhoozi was on rampage, and lavishly celebrating birthday party after birthday party, and from cities after cities; who in his/her right mind would not condemn Mr. M7's mockery of condemning Ugandans into eating cassava after cassava?

I hear statehouse budget is 200m/= daily
Does that money by cassava for the president
I hear Kenya nTanzania the presidents have announce minimum wages, but in Uganda the man is very happy with cassava, by the way did you see cassava on the party,
Report to administrator
+3 #4 Lakwena 2022-05-16 12:50
Moreover, for Ugandans with short memory; a few years ago, our Marie Antoinette, Janet Kataha Museveni cynically wondered: if they can't afford food for their school-going children; why can't Ugandans parents buy "Food Flask" for their children to take to school?

"...... It is high time we Ugandans understand what these guys want us to do.

I agree with your sentiment. However, the outstanding issue is a question: WHAT DO WE (UGANDANS) WANT TO REPLACE THESE GUYS WITH?

My personal opinion is that UNTIL THAT QUESTION IS RESOLVED AND AGREED UPON BY THE MAJORITY OF REGIONS / TRIBES IN UGANDA, WE WILL REMAIN IN THE STAUS QUO.

That leaves Ugandans with only on degree of freedom of choicre: Either the "the DEVIL you know OR the one you don't". Dear Ganda, may those among you who have ears use them here.
The issue
Report to administrator
+2 #6 kabayekka 2022-05-16 15:15
This is a country that has just been under a world pandemic lockdown for about two years.

Apart from having lived with the expensive face masks all the time, soap has been and is now a very essential anti bacteria and anti viral commodity to keep the population healthy.

Many countries have contributed greatly to this country for such products. That is why the population is asking where much of that finance has gone.

If it has been spent, one is sure that the WHO and many other humane international organizations can come forward and help the poor communities in this country to obtain relief from such life threatening effects of these expensive essential commodities.
Report to administrator