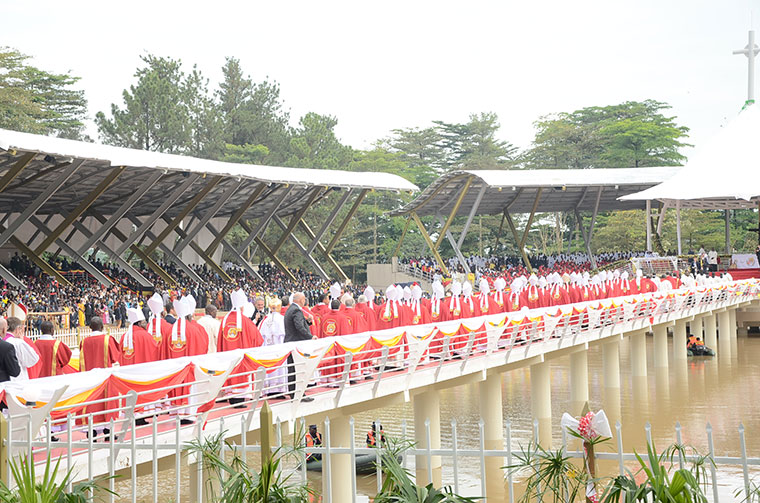 Globally, one of the most iconic things about Uganda is the issue of Uganda martyrs. Between 1885 and 1887, the group of 23 Anglican and 22 Catholic Christianity converts in Buganda were killed on the orders of Ssekabaka Mwanga.

Almost 135 years later, the martyrs continue to prominently feature in Uganda’s societies and ahead of this year’s celebrations on June 3, SAM DICK KASOLO observes that the influence and legacy of the Uganda Martyrs is drastically shifting from the religious milestone to a social and cultural celebration.

In the years that followed the execution of the martyrs, Uganda gained tremendous international spotlight and became the main symbol of the growth of Christianity in Africa, especially for the Catholic faith. To this day, their bravery to withstand persecution and die without denouncing their faith remains the hallmark of religious veneration.

The Catholic Church beatified the 22 Catholic martyrs in 1920 and on October 18, 1964, they were canonized. The canonization was greatly influenced by two special miracles. These include the 1941 miracle of the bubonic plague in which two nuns, Sr Aloyse Criblet and Sr Richildis contracted the deadly disease that had no cure at the time. Through the Uganda Martyrs, the Catholic church called for a novena, a devotion consisting of prayers on nine consecutive days, but in just three days, both nuns had recovered.

The second miracle was about Revocato Kalema who was born disabled with curved legs in 1959 in Rakai. He could not stand on his own and lost both his parents while still a toddler. While at the care of Good Samaritan Sisters of Bwanda at their main convent at Bigada, it emerged that the Catholic church was looking for miracles to pass the test for the canonization of the Uganda Martyrs.

Kalema’s plight intrigued many Catholic faithful to the extent of taking relics of the Uganda Martyrs to Bwanda convent. Through reciting novenas, the miracle happened on the sixth day when Kalema was found moving on his own among the convent pews. He fully got healed and to this day, he remains a living testimony of the miracles of the Uganda Martyrs.

Since then, no significant high-level miracle has been put on record by the Catholic Church. A lot has changed from the day of canonization and whereas the influence and symbolism of the Uganda Martyrs remains greatly entrenched in our society, little has emerged to mirror their healing and miraculous powers.

To this day, many Catholics continue to profess that they get miracles through the Uganda Martyrs. This is mostly witnessed after the June 3 pilgrimage to Namugongo Martyrs shrine, where ‘holy water’ is taken by the pilgrims.

However, these testimonies are few and far between and often lack corroborative witnesses to back them up.

Which begs the question; Do martyrs still do miracles?

The starting point is to critique the two miracles that passed the test of canonization. For instance, it is worth noting that whereas 24 of the witnesses to the bubonic plague miracle testified about the miracle powers of the Uganda Martyrs, eight of them expressed doubt.

Then again, some historians have punched holes in the case of Kalema on grounds that it was purposely commissioned by the Catholic Church in order to have the Uganda Martyrs pass the canonization test. Without dwelling on the intricacies that may seem like a witch-hunt to the Catholic Church, there is need to appreciate the role of the Uganda Martyrs on the general outlook of Uganda.

Today, June 3 remains the biggest religious, social and cultural event on the calendar, drawing hundreds of thousands to Namugongo while millions follow the events on television and other social media platforms.

Therefore, the legacy of the Uganda Martyrs remains intact and is widely seen as the biggest influence in the growth of the Catholic Church as the biggest denomination in the country with 39 per cent of the population, according to the 2019 International Religious Freedom report.

This growth has transcended religion to the extent of making Uganda Martyrs shrines a top tourism attraction. Uganda generates millions of dollars from the story of the Uganda Martyrs but their execution by Mwanga remains a subject for debate given that conditions at the time gave the Kabaka almost no option but to eliminate them in order to keep his reign.

Therefore, their story created a win-win situation for both the Catholic Church, Buganda and Ugandan government but beyond the official narrative, there seems to be a waning influence of the Uganda Martyrs.

Today, the story of the Uganda Martyrs reads more like a tourism attraction than a religious milestone and this is seen with the way people mark June 3 by holding large celebrations.

What is without doubt is that in the absence of concrete testimonies of miracles, the influence and legacy of Uganda Martyrs is drastically shifting from the religious milestone to a social and cultural celebration.