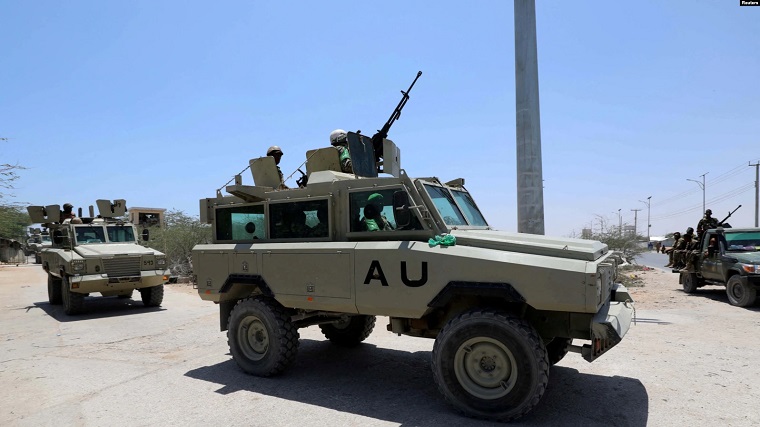 FILE - Burundian African Union peacekeepers in Somalia travel in an armored vehicle as they leave the Jaale Siad Military academy, in Mogadishu, Somalia

At least 30 Burundian soldiers were killed and 20 others injured in Tuesday's attack by al-Shabab militants on an African Union base in southern Somalia, according to a Burundian official.

The official, who requested anonymity because he is not allowed to speak to media, told VOA Somali that 10 soldiers died on the spot, and the rest of the soldiers succumbed to their wounds. He confirmed that other soldiers are still missing.

Al-Shabab said it killed 173 soldiers in the attack on the AU base in the village of El-Baraf, about 150 kilometers north of Mogadishu. The casualty figure has not been independently verified. A separate source told VOA Somali that 161 soldiers were at the camp at the time of attack. The Burundian official confirmed that number.

The Burundian official told VOA Somali that the soldiers had intelligence al-Shabab was gathering in a nearby village about 48 hours prior to the attack. He said the soldiers prepared to defend themselves and dug trenches. He said what caught the soldiers by surprise was the enormity of al-Shabab explosives detonated at the camp. He said the militants used three truck bombs, one of which fell into a ditch. He estimated the militants detonated about 20 kilograms of explosives, and that 450 militants overran the camp.

The official said the suicide truck bombs caused most of the casualties. Earlier, the government of Burundi reported 10 of their soldiers were killed, with five others missing and 25 injured. Burundi also said 20 al-Shabab militants were killed in the attack.

On Twitter, Burundi President Evariste Ndayishimiye said there are no words strong enough to condemn the terrorist attack against the Burundian contingent. He wrote, "I join with all of Africa which has just lost sons and daughters … to console the hard-hit families."

The African Union, the Somali government and the embassy of the United States in Mogadishu have all strongly condemned the al-Shabab attack. AU chief Moussa Faki Mahamat paid tribute to the Burundian soldiers killed, and said the "heinous" attack will not lessen support of AU forces to Somalia.

The Somali ministry of Foreign Affairs called on the international community to increase and provide higher-end capability to Somali security forces and AU forces so they can effectively combat terrorism in Somalia.

The incident marked the first major al-Shabab attack on AU forces since the mission changed its name and operational structures last month. The UN Security Council, which authorized the new mission called the African Union Transition Mission in Somalia, gave it a mandate to reduce the threat posed by al-Shabab, support the capacity building of Somali security forces, and conduct a phased handover of security responsibilities to the Somali government. The mission's mandate runs through the end of 2024.

+1 #1 kabayekka 2022-05-09 12:51
Well if the mandate of these African killing wars end in 2024 by the UN, why are the African public being told all the political lies that are possible that national democratic elections are going to happen this year 2022?

One is of the opinion that Somalia must come together including Al Shabab to start talking African peace and development!

USA that wanted very much to interfere in all the political corners of the world has subsidised!

Even the Afghanistan guerrillas are learning the hard way to govern and lead their people to God's Heaven in a civilised way?
Report to administrator