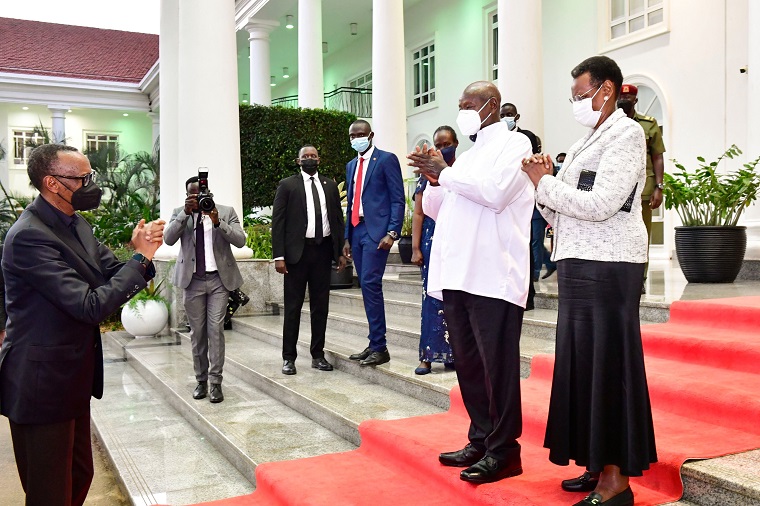 Uganda President Yoweri Kaguta Museveni and his Rwandan counterpart Paul Kagame have agreed to push for joint regional peace and stability in the Democratic Republic of Congo (DR Congo).

According to a press release from State House, Entebbe, the two leaders today held a bilateral meeting over a wide range of issues. Today's visit was Kagame's first since March 2018 and there has been heightened diplomatic tensions between the two countries after Kagame accused Uganda of harbouring and funding Rwanda's dissidents and subsequently went on to close the borders.

Museveni said that the problems affecting the region like the crisis in Congo needs collective approach from all regional members.

“This time we must insist on working together because these people have suffered a lot. I told President Kenyatta [of Kenya] that if we don’t come in as a region, Congo may become like Sudan,” Museveni said.

On the other hand, Kagame called on all the warring parties in Congo to come to a round table and resolve the crisis once and for all.

“They need to talk without leaving anyone behind,” Kagame said.

Thousands of several Congolese were recently forced to flee into Uganda following renewed fights between the M23 rebels and the Congolese army.

Later, Museveni together with the First Lady and minister of Education and Sports Janet Kataaha Museveni hosted Kagame to a dinner in honour of their son also commander of Land Forces Lt. Gen Muhoozi Kainerugaba's 48th birthday.

+3 #1 Tim 2022-04-25 07:23
The regional leaders should stop in instigating insurgency if DRC is to attain peace the same leaders are are talking about. Give Congolese a chance
Report to administrator
+11 #2 Lakwena 2022-04-25 11:03
In other words, these are the very bloody people who from Luweero, and for 5 ears destabilized Uganda.

They are the same people who triggered the 1994 Genocide in Rwanda; and went on to destabilized DR Cong; how on earth can they be the ones stabilize it?

BS sadists!
Report to administrator
+1 #3 Jama 2022-04-25 14:03
Fire lighters pretending to be fire fighters.
Report to administrator
+1 #4 Apollo 2022-04-25 14:23
To put it modestly, Gen. Kagame came to accept a surrender. The statement: "Greater Generals win the Peace", appeared to be a compliment Gen. Kagame was making in regard to the peace efforts Gen. Muhoozi made between the two old Generals but it was not so. Gen. Kagame had achieved a great strategic victory against Gen. Museveni without firing a single shot and this statement applied to him instead.

Tsu Zsu, the legendary Chinese military strategist stated: “The supreme art of war is to subdue the enemy without fighting.” ― Sun Tzu, The Art of War
Report to administrator
+3 #5 Akao 2022-04-25 17:58
They are probably discussing how they can loot from DRC or destabilize it further for loot and refugee money.

That's the main reason they allowed it in the East African block, even though DRC is in central Africa.

How can they discuss security in DRC without involving DRC in the discussion. That is BS from the two murders
Report to administrator
+3 #6 A K Mukasa 2022-04-25 22:09
The two are now working together for their own survival as one of them knows his survival is no longer dependent on the goodwill of Ugandans but on the suppression of Ugandans within Uganda and outside Uganda.

He can’t afford to have enemies across the borders as those determined to get rid of him may take advantage of the bad blood between him his neighbours to oust him. He also needs the man from Kigali to help his useless son to continue Kagutta/Mohozi misrule.

The man from Kigali is probably doing this because he will need somewhere to seek refuge when things go wrong. He has made so many enemies and rather he trusts the devil he knows. It is a symbiotic relationship of two ruthless dictators.
Report to administrator
+1 #7 Kalibbala 2022-04-26 00:44
Lakwena Spot on!!These Psychopaths are Responsible for the Suffering of Poor Congolese and the Death of 1.000.000 Rwandese just Simply Because they take Themselves to be Demi Gods!! Remember Habyarimana had Agreed to have Them Back on Condition of having them Screened for Crimes committed!

Today they decide Who has to live or Die ! It will take a Collective Effort from Both Ugandans and Friends to Get rid of these Blood Hounds! Time to Consider Strategies !! Wake Up UGANDA OR ELSE YOU ARE BOUND TO BE ANNEXED BY RWANDA..
Report to administrator
+2 #8 kabayekka 2022-04-26 08:45
To come to a round table (not a square) and talk African peace? One doubts such an approach would succeed!

Because none of these guerrilla African leaders have any such successful records of talking democratic peaceful coexistence between African communities!

All they seem to understand is the miserable battles to go on until the winner takes all!
Report to administrator
0 #9 kabayekka 2022-04-26 16:28
No peace in E A Union meaning; I am a democratic leader of an example of the well known two bicycle pedals.

They install them by force. To remove these spare parts for repair or replacement one needs to apply immense force?
Report to administrator