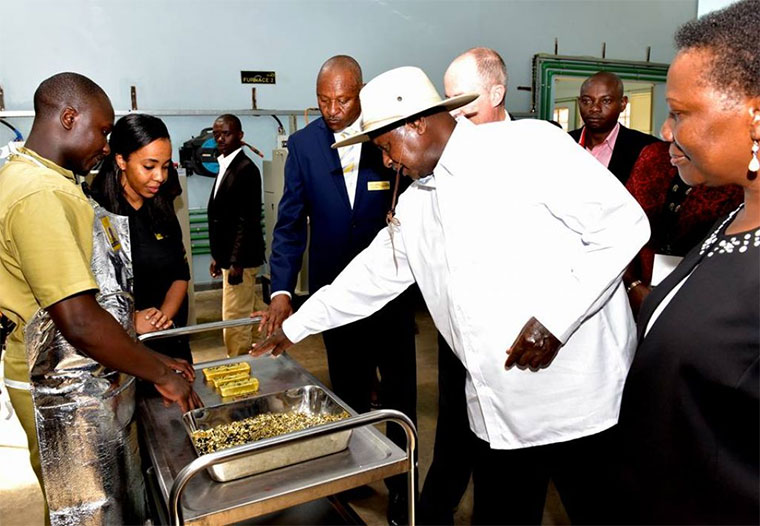 Sanctions from the United States of America against African Gold Refinery and its founder, Alain Goetz, which were issued last week, have raised suspicion over the superpower’s intentions, especially after the United Nations had stayed its decision.

Last week, The Observer reported that the United Nations Group of Experts had recently met with different officials in the mining sector in Uganda, seeking questions over allegations of illicit trade in gold.

Those questions were drawn from different reports published by non-governmental organizations alleging that gold from the Democratic Republic of Congo, which they defined as conflict gold, was being traded in Uganda. The UN team needed to independently verify this.

The UN group appeared to lack enough evidence to prove those allegations and, therefore, decided to postpone its decision. However, the United States, regardless, went ahead and slapped sanctions against AGR and Alain Goetz.

African Gold Refinery was the first refinery to be set up in Uganda in 2014. It was founded by Alain Goetz. AGR’s entry led to the growth in the trade in gold, with the mineral surpassing workers’ remittances as Uganda’s largest export.

“Why would the USA go against the UN’s decision? What is the motive of the USA? Why didn’t the USA wait for the UN to come up with their report and then make its own decision?” a local mining official who attended the meeting with the UN officials in Kampala said. The official requested for anonymity because of a possible reprieve.

The United States Department of the Treasury’s Office of Foreign Assets Control (OFAC) announced last week that it had “sanctioned Alain Goetz, the African Gold Refinery in Uganda, and a network of companies involved in the illicit movement of gold valued at hundreds of millions of dollars per year from the Democratic Republic of the Congo (DRC). The illicit movement of gold provides revenue to armed groups that threaten the peace, security, and stability of the DRC.”

While a number of rebel groups continue to operate inside the DR Congo, their activities have reduced over the last 10 years. The statement from OFAC says there are approximately 130 active groups and gold is the major driver of conflict.

However, the United Nations Organisation Stabilisation Mission in the Democratic Republic of Congo lists four rebel groups operating in the mineral-rich country. Of the four, two are said to be fighting Rwanda and Burundi. The other two are fighting Uganda – the Allied Democratic Forces (ADF) and the Lord’s Resistance Army (LRA), both of which are thought to be at their weakest.

Uganda’s army is already in the middle of a military campaign against the ADF, while the LRA is, for intents and purposes, nearly vanquished.

The mining official said Uganda’s foreign affairs ministry would not have disagreed with the sanctions if they had evidence that African Gold Refinery or Alain Goetz was transacting in ‘conflict minerals’ with the rebels.

Adonia Ayebare, Uganda’s permanent representative to the United Nations, was quoted in the Daily Monitor newspaper saying: “I can confirm that the issue of African Gold Refinery was taken to the UN Security Council on Tuesday, March 15. Our position is that AGR is adding value to gold that used to be exported raw and fetched low price. And AGRL does due diligence on sourcing. The only way for Uganda to grow is if it exports high value-added products and that is what AGR is doing in the region.”

In a past interview with The Observer, Goetz, said Uganda has “huge potential for gold.”  He added that “Kampala is a very lively hub for gold for many years. Many people come from all over the region – South Sudan, DR Congo - to buy goods in Kampala. But they cannot bring money from South Sudan or Congo. So, they buy the gold, they come to Kampala and buy the goods. So, that is one way of attracting gold from all over the region.”

Goetz issued a statement saying that the emergence of African Gold Refinery has created more transparency in the sector, “a complete shift from the hidden underground industry that offered informal traders a safe haven.”

Uganda’s gold exports for 2021 were valued at more than $2.2 billion, accounting for more than 40 per cent of the total exports. There are calls for Uganda’s government to consider increasing gold assets as a special reserve, in what experts predict could reduce the dollar-denominated reserves.

To gain control of gold in areas where the militia is weakening. There’s a contradiction in what’s perceived to be on the ground and the real motivation for Uganda spending it’s meagre resources on a war allegedly on ADF.

The Obote and Amin greed for an once of Gold is come back to breed a new breed of African leaders in East and Central Africa?

What exactly would like to tell us readers? With this sort of phrase, it is very difficult to understand what you have in mind.
Do Ugandans some justice to write very clear phrases if not sentences!
Report to administrator