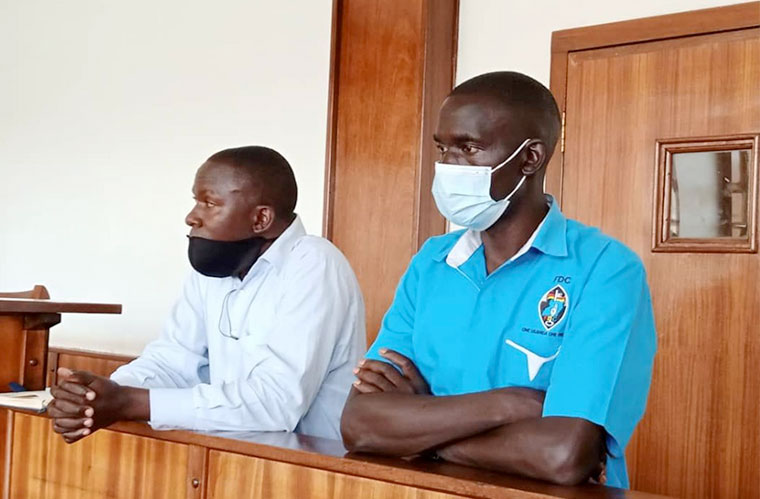 FDC deputy chief administrative officer Ojobile and Mayanja have been acquitted by the grade one magistrate Fidelis Otwao on charges stemming from their protest held in November 2018 when they carried pig heads to the central police station (CPS) in Kampala protesting the rot in the Bank of Uganda that had reportedly resulted into the closure of a number of commercial banks in the country for many years.

According to them, corruption at the Central bank had been the sole ingredient for the closure of commercial banks in Uganda over the years because it reportedly mismanaged them and made erroneous decisions that led to their closure.

With fresh pig heads tied around their necks and stinking blood oozing across their white T-shirts, Mayanja and Ojobile walked through the streets of Kampala to the police in a protest that was spearheaded by their pressure group known as the Jobless Youth.

One pig head had a placard bearing the name of the former and late BOU governor Emmanuel Tumusiime Mutebile and the other of his former deputy Louis Kasekende.

The protest at CPS came a few days after another that was staged at the Central bank where two piglets were dumped bearing the name of Juma Kisaame (a Muslim), the former managing director of DFCU bank.

As a result, the duo was arrested and taken to Buganda Road court on charges of common nuisance and the prosecution adduced evidence from five witnesses who included police officers and Muslims who were reportedly angered by the protest.

According to the witnesses, the actions of Mayanja and Ojobile were annoying to the people whose names were mentioned and tagged on pig heads, and the smell that was coming out of the fresh pig heads was most likely to result in injury to a considerable number of the public by affecting their health, and the protest affected businesses since some shops allegedly had to close to see what was happening outside due to their commotion.

But when Mayanja and Ojobile were asked to defend themselves over the allegations, the duo that didn't have legal representation chose to keep quiet as their defense and let the court make its decision based on what the prosecution witnesses had testified to.

In a judgement read today Friday by Otwao, he indicated that the evidence from the prosecution witnesses is wanting because none of the people alleged to have been annoyed by the actions of the activists testified in the case or recorded a statement with police.

According to Otwao, the testimonies were based on what the witnesses were feeling as individuals and that there were no abusive statements on the pig heads that the prosecution had indicated which would cause annoyance, save for putting the names of people only.

As such, the court has ruled that such testimonies cannot be relied on to convict a person because the prosecution has failed to prove that there was common injury, danger to the public or destruction of property.

Consequently, the magistrate has acquitted the duo and directed that each of them starts the process to seek a refund of the Shs 500,000 that each had paid to be released on bail.

The activists have welcomed the ruling saying that the court has recognized that the citizens have a right to protest peacefully.

The pig protests have been commonly used by activists who subscribe to this group known as the Jobless Brotherhood which has since rebranded to the “Alternative".

In 2016, their members including Luta Ferdinand who is now facing trial in the court-martial on different charges, and Joseph Lukwago were arrested for dumping piglets at parliament protesting the Shs 200 million given to each MP for buying personal cars.

Much of what these silent activists are against is well written in the national and international media. Even the IMF is in the same game of corruption with the main national Bank of Uganda to see to it that much of the debts this country owes and paid for is classified(top secret).

It is only China that is very clear with its investments and trying to do something against African rampant financial corruption!
Report to administrator