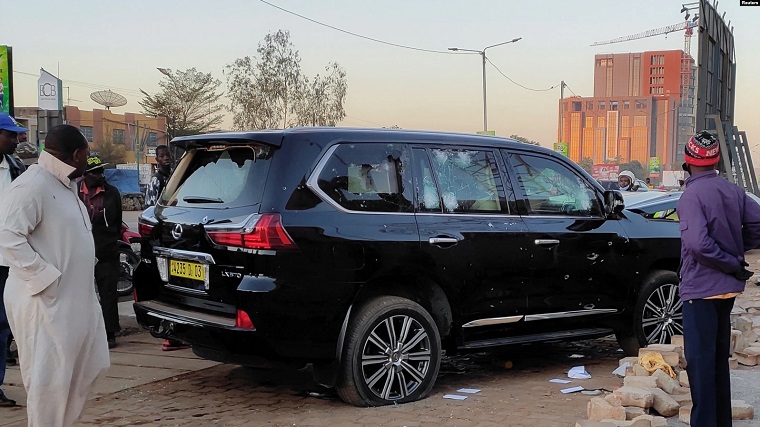 Bullet holes are seen in a car that belong to presidency following heavy gunfire near the president Roch Kabore residence in Ouagadougou, Burkina Faso

Soldiers in the West African nation of Burkina Faso say they have ousted President Roch Marc Christian Kabore and that a military junta now controls the country.

More than a dozen mutinous soldiers appeared on state television Monday to make the announcement and said the takeover had been carried out without violence. Captain Sidsore Kaber Ouedraogo said the new military leaders would work to create a calendar "acceptable to everyone" for holding new elections.

The development follows reports of heavy fighting near the presidential palace in the capital, Ouagadougou. The whereabouts of Kabore are not clear. Reports earlier Monday said he was detained by mutineering soldiers along with other members of his government.

An announcement signed by Lieutenant Colonel Paul-Henri Sandaogo Damiba said Monday that those detained were at a secure location. The statement blamed Kabore for failing to unite the nation and said he did not effectively respond to the country's challenges.

Kabore's party said earlier that he had survived an assassination attempt but gave no further details. The new military leaders said they had suspended Burkina Faso's constitution, dissolved the National Assembly and closed the country's borders.

UN Secretary-General Antonio Guterres strongly condemned "any attempt to take over a government by the force of arms" and called on "the coup leaders to lay down their arms and ensure the protection" of Kabore, according to his spokesperson, Stéphane Dujarric.

Burkina Faso has been embroiled in a conflict with terror groups linked to al-Qaeda and Islamic State since 2015. Rumors of a coup have been rife for weeks after a military base in the north of the country was overrun by terrorists in November, killing 49 military members.

Kabore fired members of his Cabinet and military leadership in December in response. The current unrest began early Sunday when heavy gunfire was heard inside Ouagadougou's largest military base, Camp Sangoule Lamizana.

VOA journalist Henry Wilkins was temporarily detained inside the camp and spoke to one of the organizers of the mutiny, who relayed a list of demands from the mutineers, including "more money and more troops" to aid in the fight against terrorism, along with better training and the organization of a permanent military unit on the front lines.

The mutineers also demanded the resignations of the military chief of staff and chief of the intelligence services, and better care of the wounded and families of soldiers who have died in the conflict. The apparent coup in Burkina Faso is the third in West Africa in the past 18 months, following those in Mali and neighboring Guinea.

See Chad, Mali, Niger, now Burkina. It works.
However, be prepared to deal with the ramifications by yourself. Ffe twagala biwedde.
Report to administrator