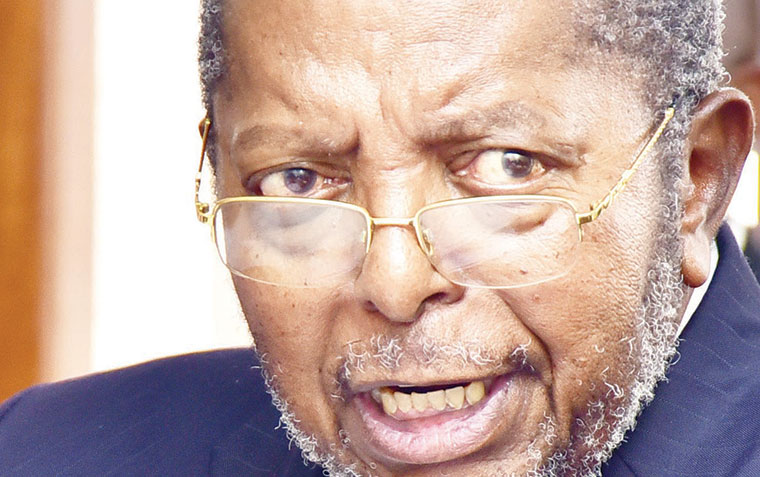 Bank of Uganda governor, Prof Emmanuel Tumusiime-Mutebile is dead. Mutebile died today morning at Nairobi Hospital in neighbouring Kenya, according to an announcement by deputy governor Micheal Atingi-Ego. He was 72.

Mutebile was admitted to Nairobi hospital on Sunday, December 31, 2021, after he collapsed due to complications related to diabetes. He had been in and out of hospital in recent years for the same complications.

Mutebile, a seasoned professional economist has served as governor and chairman of the board of directors of the Bank of Uganda since 2001, and had just started a new term of office for which he was reappointed in 2021. He served as secretary to the treasury from 1992 to 2001 when he was appointed governor.

He is remembered for spearheading the design and implementation of the Economic Reform Program that restored Uganda from the economic crises of the 1970s and 1980s to sound economic performance during his service as the permanent secretary/secretary to the Treasury in the ministry of Finance, Planning, and Economic Development.

He also worked as a consultant for multilateral and regional organizations including the World Bank, International Monetary Fund, Organization for Economic Cooperation and Development, Macroeconomic and Financial Management Institute of East and Central Africa, UK Department for International Development, the North-South Institute in Canada, and for the governments of Rwanda, Kenya, Tanzania, Eritrea, and Nepal.

2- He wrote to all financial institutions instructing them not to employ anyone from the closed ''Greenland p of Companies.

R.I.P. One question though: why do they all run to Nairobi hospital or elsewhere outside Uganda when they control the resources that could easily have improved our hospitals?

How embarrassing it is to see people in leadership positions runing to other countries to enjoy services put by people in positions similar to the ones they hold!

I have met many Kenyans who despite Ugandans for allowing one Museveni to rule them for all these time. Now he has even appointed his son to replace him.

There is something very wrong with we Ugandans. How dumb can we be and allow this to continue?
Report to administrator
+7 #13 Loveuganda 2022-01-24 01:44
Mutebile dies in Nairobi. What a heading. May he rest in peace.

It's unfortunate that he has died on foreign soil. Many have said he has been generous. Potential Lubowa hospital is still on paper/ foundation.

Our Mulago couldn't manage him. Poor Ugandans for those who cannot be flown out. Another lesson to learn. He should have retired and enjoyed his money.
Report to administrator
+7 #14 Lakwena 2022-01-24 08:28
May his soul be at peace.

But it is a rotten egg on the face of our braggadocios dictator in out State House and accomplices.

It is a constant reminder and national embarrassment, when hundreds of countrymen, women and children die in dehumanizing hospitals scattered throughout the four corners of this county; but our Fat Cats in government go to die from foreign 5-star Hospitals.

In other words, even Gen Tibuhaburwa will go to die in one of the Kenyan Hospitals.

Shame! It is a pity that a globally revered Economist died serving a rotten regime.

One of the legacies of Dirty President Gen Tibuhaburwa is that: he succeeded in making many clean and distinguished Ugandans Dirty.

Wachireba?
Report to administrator
+4 #15 Zaitun 2022-01-24 16:46
I read everywhere, "May his soul rest in peace."
Are you really sure of what you are saying? One of the ten commandments states clearly "Thou shall not steal; Thou shall not kill."

This guy stone billions of dollars, he helped Museveni who was in Luwero Triangle in killing Ugandans, and by stealing, he helped in destroying hospitals, schools etc., hence death of innocent Ugandans on poor roads, in hospitals, due suicide etc.

By destroying Ugandan Companies, many families lost income, hence lack of financial support to pay bills. As such many who ran poor, committed suicide. We can see the consequences of his policies on the streets of Kampala and other towns.

Any intelligent person can not be proud of the banking policies he left behind. His death will only be regreted by those with whom he was drowning in money.
Well, a man has died. Conolences.
Report to administrator
12