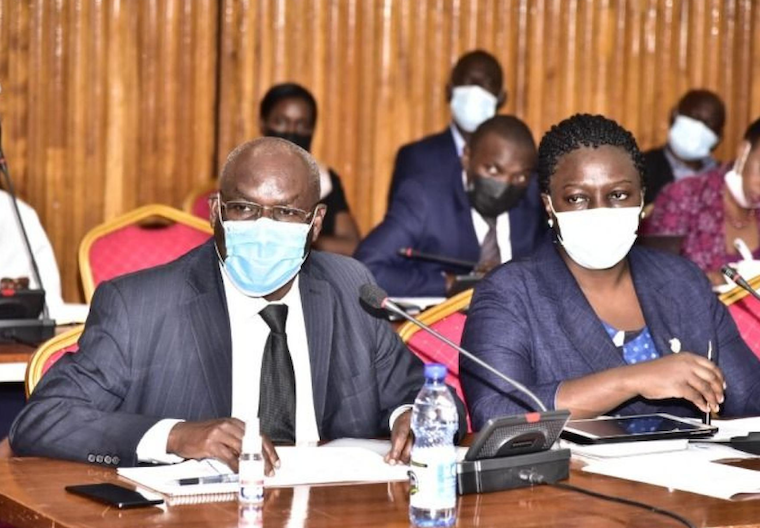 Minister of state for Energy, Sidronius Okaasai Opolot with permanent secretary Irene Batebe before the MPs

Parliament’s environment and natural resources committee has asked the ministry of Energy to conduct a study on the status and performance of power distributors Umeme as its concession comes to an end.

Umeme was granted a 10-year concession in 2015 subject to renewal. As of December 2021, Umeme had made investments worth $547.5 million out of which, it has recovered $331 million. Ministry of Energy had however sought a budget of Shs 256.2 billion to start a phased buyout of the company.

However, MPs have recommended that government focuses on assessing the status of Umeme and its performance instead of looking for money for a buyout. The matter came up this afternoon when ministry of Energy officials led by the state minister for Energy Sidronius Okaasai Opolot appeared before the committee to discuss the Budget Framework Paper for the financial year 2022/2023.

Okaasai had asked the committee to support the ministry with a budgetary provision of Shs 256.2 billion to kickstart the payment process and help government to manage the buyout effectively.

“This is a proposal we are making to make the final buyout simpler,” Okaasai stated before MPs questioned the request.

Irene Batebe, the permanent secretary in the ministry of Energy explained that the buyout will cost a total of $215 million and what is being requested for now is only the first instalment. She told the committee that the government was planning to regulate further investments by Umeme to ensure that it doesn’t have to pay a lot of money.

Kasilo County MP Elijah Okupa said that there is no need to concentrate on the buyout but rather focus on a study on the status and performance of the company. He added that the previous parliament had already recommended the termination of Umeme's contract because they did not meet the concession terms and conditions.

“There were glaring things at that time that Umeme had not followed, there is a reason those who drafted the concession included the study in the 17th year, they knew certain conditions had to be met. Has Umeme performed 100 per cent, that is why we needed an evaluation of the performance,” Okupa said.

Dr Emmanuel Otaala, the committee chairperson said that providing for funds for the buyout now is speculation, adding that a study should be undertaken to inform further decisions.

Minister Okaasai agreed with the MPs and conceded on the proposal to halt the demand for funds for the buyout, and instead told the committee that they will progress with the study through the office of the Attorney General. He added that his ministry is going to submit to the committee a budget for a study. He proposed that the study be done by the Auditor General as they continue discussions with the cabinet on the future of Umeme.

The ministry should have come to parliament and asked for a way forward but not to come with its suggestions! To me that sounds suspicious.
Report to administrator