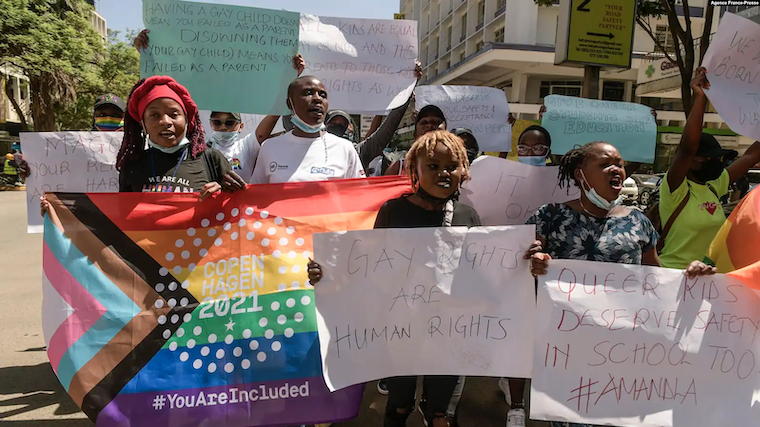 People march in downtown Nairobi, Kenya, during a protest organized by The Queer Republic in Nairobi

A group of Kenyan LGBT students protested Thursday against a Cabinet minister’s recent suggestion they be banned from boarding schools. The schools are common in Kenya and the students and rights groups say a ban would be discriminatory and compromise their safety.

Dozens of angry students took to the streets of Nairobi Thursday in a peaceful protest to Kenya's ministry of Education. They were armed with placards that denounced a suggestion by the Cabinet secretary for education, George Magoha, that homosexual students be barred from boarding schools. Magoha said gay students should be restricted to day schools - closer to their homes so that they don't influence other students in schools.

MaryLiz Biubwa, one of the protesters, said Magoha’s comment is beginning to have an effect at some schools.

"Because of the directive Magoha has given, I have two students who have reached out, one I am planning to start the journey of helping them tomorrow, because she was already sent out of school. She has KCSE in March, she can’t go back because she will be told she is gay,” said Biubwa.

KCSE is Kenya's certificate of secondary school examination. In their two-page petition to the Education secretary, the protesters called on him to withdraw his December remarks, and to criminalize all types of phobias they say put people's lives at risk, including the lives of homosexual students.

Makena Njeri is the founder of Bold Africa, a gay rights network.

"Being a gay student going through high school already was a challenge all the way down to even being very close to being expelled. This already is discriminating me as a child when I was growing up.Now that the government is adding more pressure to institutions to continue discriminating [against] the kids [and] is something that we'll not stand,” said Njeri.

Kenya is one of many African countries that outlaw homosexuality. VOA has established that the cabinet secretary has yet to officially order boarding schools in Kenya to bar suspected gay students.

A state education official, speaking on condition of anonymity, said ordinarily, a formal circular would be sent to all heads of boarding schools.

"Implementing such a directive would be very difficult and can lead to a lot of fury. You can see that the statement he made is already causing chaos. What if a principal of a school was seen doing that? it would be a disaster,” said the education official.

The LGBT community leaders who presented their petition to the Ministry of Education are expected to meet with Magoha next week.

In other words, discrimination against destructive and/or unproductive forces is not a prejudice nor crime (human rights violation/crime), but a distinction between right right and wrong (perversion); harmless and harmful ; etc. the protection and preservation of the human race!
Quote | Report to administrator
0 #2 kabayekka 2022-01-17 13:31
Observer editor stop your tyranny against your readers who seem to have a different opinion from yours.
Quote | Report to administrator
+1 #3 kabayekka 2022-01-17 19:46
This is an example of African ruling elites becoming confused with the business of religiously governing people outside their houses and inside as well.

In Uganda these elites send their soldiers into people's houses without even a warrant, load them into security vans and take them in hiding for months on end.

What one does in ones bedroom and dining hall seems to be their very important business. Even the Christian religious elites right now in Uganda after a very miserable lockdown of two years want all the girl teenagers who have received pregnancy not to attend school.

They are as confused as the Taliban of Afghanistan. Actually one wants to believe that Mary the mother of Jesus was a teenager virgin when God begged her to accept and to conceive His Son. What was so wrong about that?
Quote | Report to administrator
Refresh comments list
RSS feed for comments to this post
Add comment