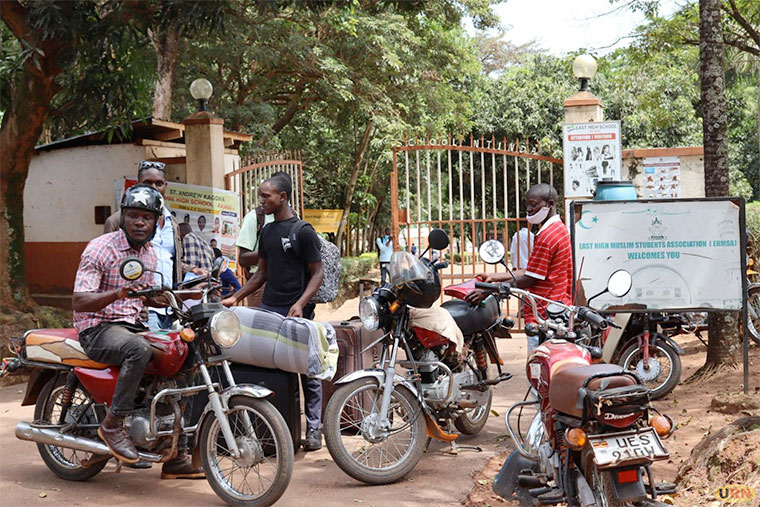 There were tears, frustration and anguish at East High School Ntinda yesterday Thursday as parents, and guardians turned up to pick their children following the abrupt closure of the school, just days after reopening for a new term on January 10.
Many parents dropped their children at the school early this week only to get a notification three days later that it had been closed. Several parents turned up at the school in disbelief about the turn of events, while others thought the communication doing rounds on social media was just fake news.

Hamis Kabogoza, a parent with three students at the school said that he received communication about the closure of the school on Tuesday evening. He, however, says that he only believed the letter upon arrival at the school on Thursday morning.

“I had completed all the process of returning my children to school. I paid to zero balance for the three children and returned home with peace of mind. Now see, the term is already on and my kids don’t have a school. Now we must go school hunting,” said Kabogoza.

Robinah Ali Namuggwe, another parent, wondered why the school administrators opened for a new term when they were not sure whether they would be able to teach their children or not.

"Now I have to struggle again to look for a school which comes with extra expenses. They told us they needed school fees in full payment before reporting and they received the money, and now they are talking a different language. So I'm not happy," Namuggwe said.

Parents aside, students were also thrown into sudden disbelief and panic over the closure of the school only a few days after reporting and attending some lessons on Tuesday. Fahad Ssemakula, a senior two student notes that he had switched his mind to studies after the prolonged two-year school closure only to be told that they must now find new schools.

"I’m so disappointed by the decision made by our board of directors because this term we were expecting a lot from them. This a great disappointment to most of our parents because they were willing to pay at the beginning of the term but after 4 days, we were informed that the school has to be closed due to some unknown reasons. I had not joined yet but I had paid the school fees already and I was preparing to report on Friday. So I’m here to pick up my stuff and claim for my school fees," said Ssemakula.

To the candidates, the closure hit them hardest as they are now pondering their next move. Hilda Liyong, a senior six candidate, said that they are worried that they might take time to get admission since many good schools usually don’t admit candidates.

"It has really affected us because some of us had reported on the first day, we had come first because we’re form six candidates. We did not expect this to happen, it was just abrupt, and right now changing schools, schools don’t allow admission of form sixes. That is going to be the most difficult part. Right now all we can do is look for new schools and just settle as soon as possible for registration coz we’re almost registering for Uneb," said Liyong.

Aisha Namuli, a teacher, notes that two weeks after school reopening, the headteacher called to convince her to leave the previous job she'd got during the lockdown and return to class. She now regrets why she left her new job to return to a school managed by "unserious" and "inconsiderate" people.

Namuli says that to the surprise of many teachers, the school administrators have up to now not communicated to the teachers officially on the new developments.

"I just feel sad, that is it because they made me leave my job. I had gotten a job and they called me back. They knew what they had in mind and now I have nothing to do. They called me and I arrived here last week on Friday, so Sunday we started receiving students and now today we’re closing. I don’t know where to start from and I don’t know what they have in mind. They have not officially communicated to us, and to our surprise, it was the students who got to know first before us, the staff. That also speaks something. But even on top of that, the head teacher who is supposed to be there to tell us what is next or what is on ground is not around. His phones are even off so we don’t know what is next," said Namuli.

Ali Mugerwa, another teacher says that the trouble for the school began in 2020 when the former director sold it off to city businessman, Omar Mandela amidst financial challenges triggered by the prolonged closure of schools. He notes that right from the short-lived learning period in 2021, things started to change when the new management hiked the tuition and cut down salaries of all staff.

Although the reason for the abrupt closure of the school remains unclear, a circular issued to parents indicates that it was closed due to the poor turn up of students and the need to renovate it.
"On behalf of the B.O.D (board of directors) I regret to inform you that business at East High School has been put on a halt to facilitate the new development before resumption in the next academic year,” the circular signed by Abdul Khadir, one of the directors reads in part.

However, the deputy principal, Bosco Khalifa gave another reason altogether for the closure of the school in an interview with URN. Khalifa, who claimed that his bosses will extensively explain the matter, noted that the new management is going to restructure the school and turn it into a modern girls-only school.

“This place is going to be completely changed. The new management wants to establish a girls-only school. However, the establishment of such a school requires time to set up. But more information on this will be shared by the directors,” Khalifa told our reporter before chasing him off the school premises.

Although the director had advised parents to enroll their children in selected schools, several parents who turned up on Thursday afternoon to pick their children rejected the offer and instead asked the school for a refund of their tuition and other requirements, which the administrators agreed to.

The parents noted that the abrupt closure of the school is another indication of the government’s failure to regulate private schools, leaving them to do whatever they like. Christopher Lwanga, one of the parents asked the ministry of Education to put up strong policies regulating the closure of private schools.

"Now, abruptly they said; 'come for your money, we have closed the school.' Who can do that? If you’re telling a tenant that; now get out of the house, am closing or I have sold the house, get out. Can that one happen, please, please, ministry has to come in to help Ugandans," Lwanga said.

As parents picked their children from the school, agents of other schools that had set up tents at the main entrance offered them admission on the spot. Schools such as St Julian Gayaza even brought buses to offer free transport to learners who would enroll at their school.

The school which has been known for posting good academic performance is now one of the non-medical casualties of the COVID-19 pandemic, which plunged into financial distress.

Otherwise, e.g. what was the difference between the rate of infection in the Region's neighboring countries that didn't close schools this long , and Uganda, whose 2-year closer turn out to be a disaster than a solution?

In other words, among others; the ripple effects of the 2-year closer of schools, is going to become one of the worst sabotage the NRM leadership has done to this country.

That's what happens when through criminal means, incompetent, reactionary criminals capture political power. They inhumanely do terrible things to the people/country.
Report to administrator
+8 #2 sula 2022-01-14 16:28
1- Spot on Lakwena.

2- It was never going to be easy to move from cattle -herding to governing a country.
those who thought of a miracle should now see for themselves.
Report to administrator
+1 #3 Ahmed dodie Ali 2022-01-15 08:24
I'm one of the pioneers of East high school ntinda.
It's really a sad story but just repeated itself.

We started by the name prince Badru sec school in 1998 but lasted for only two (2) terms and we were abruptly transferred to East high ntinda without notice. They fooled us by then but accepted though the school was unfinished.
Report to administrator
+1 #4 Kalibbala 2022-01-15 23:30
Spot on Sula and Lakwena! NRA (Notorious Robbers Army/Movement had an Agenda of punishing Ugandans !

They have not only Killed us with Impunity but Continued with Sabotage of All Caliber !

Beginning with Stealing our Savings in 1986 by 30% deduction living us with 700 shillings out of a Thousand!

Closing Banks and Cooperatives that were Empowering Farmers to Prosper!

Now After Elections realizing that We are sick of them, They decide to Make our Education System Shambolic Impregnating our Young Girls and making Sure that All the Youth remain Stupid!

With one option of becoming LDU or Kadama in Oman and Bahrain..!Even Hitler Thought he was Invincible ! Where is he? Ugandans are Resilient but One Day will be the last Day..
Report to administrator
+1 #5 WADADA rogers 2022-01-16 22:46
it is the price we pay when you have a Government that is not aware that they have a duty to regulate the operation of private schools and again it is the price we pay when the Government cannot provide a stimulus fund to education institutions that were hit hard during the lock-down, its a pity that parents have to look for schools afresh and even pay school fees again
Report to administrator