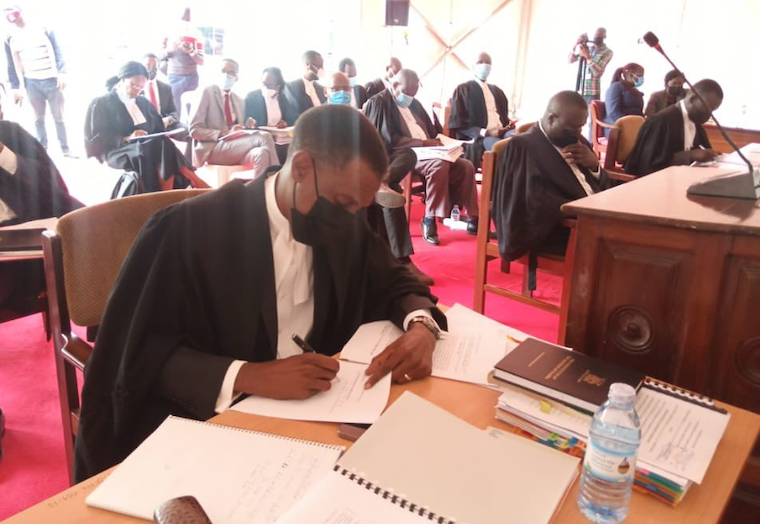 A missing land case file and a frantic petition to the judiciary threaten to kindle land warfare in the eastern district of Bukedea.

About 1,428 residents of Bukedea sued in August 2020 to block their eviction and takeover of 2,000 acres of their ancestral land but one and half years later the case is in turmoil after the file went missing.

The petitioners allege that high- profile government officials could have a hand in the disappearance of the file. Alfred Edeke, on behalf of the 1,428 residents of Amujeju village in Kabarwa sub-county in Bukedea district, sued the Attorney General and six others in August 2020 at the High court in Soroti for land grabbing, torturing, and arresting others.

According to the January 3, 2022 petition to the Principal Judge Flavian Zeija written by counsel George Lukwago from Ssemengo & Co. Advocates, when the complainants’ lawyers; Alliance Advocates, followed up the matter in court, they were told the file was in Kampala. When they took up the matter with Kampala, they found the file had gone missing.

The complainants are mostly resi- dents of Amujeju village and allege that more than 2,000 acres were taken away for the construction of a State Lodge and the installation of a military barracks. These aggrieved residents filed an application in the High court in Soroti seeking legal redress over their eviction from the land.

About 1,428 people were evicted from this controversial land in May 2019 by persons reported to have been hired by individuals including area leaders in Bukedea. Some of the affected residents were reportedly tortured and sexually abused by the group hired during the two days of eviction.

The petitioners argue that government institutions including the po- lice failed to help despite repeated calls for help. This forced them to sue government officials for complicity and failure to protect innocent civilians and their property from human rights violations stemming from an illegal eviction exercise.

Edeke, John Omongole, Celina Okello, and 12 others listed seven government officials whom they are accusing of negligence of duty and failure to provide justice when they sought their help. The list includes the Inspector General of Police, the Attorney General, and Michael Simanya, Moses Bwayo, Jackson Ojekede and Fred Ojepa.

In 2020, the Criminal Investiga- tions department summoned former Bukedea district police commander (DPC) Ezra Tugume on allegations of corruption and bribery in aiding the eviction exercise and failure to investigate and bring to book human rights violators. But sources told this reporter that this DPC was later transferred to Entebbe.

Interviewed Bukedea Woman MP and Deputy Speaker of Parliament Anita Among said she is not in- volved in the Amujeju land scandal.

“I have never seen the petition to the principal judge. And the land they are talking about doesn’t exist. I will take you to Bukedea to see for yourself...” she said.

The purpose of this letter is two-fold, the lawyers wrote: “First it is to seek your indulgence and immediate action as our clients are being evicted, left homeless and their developments destroyed by the same persons.

“Secondly, the said file has gone missing and the same can no longer be located and this has brought more worries to our clients about their next course of justice,” counsel Lukwago wrote.

Interviewed by telephone, Lukwago said they have details of the case but were only hired to file a complaint to the principal judge.

“We were briefed that a big hand was involved in this case and that this could have led to the file missing. There have been allegations of land grabbing first before the local authorities who could not conclusively handle the allegations because of the big people involved,” he said.

Court records show that this case has taken long to be disposed of. In September last year, Alliance Advocates wrote to the same principal judge petitioning for the expeditious disposal of the case.

In reply on June 10, 2021, the prin- cipal judge said he had never called for, nor received the subject case file for further directions as indicated by the petitioners’ lawyers; Alliance Advocates.

“By copy of this letter, the Assistant Registrar, Soroti High court is requested to give me a brief about the position of the subject case file not later than June 30, 2021,” Justice Zeija said.

When contacted for a comment, Justice Zeija said he was still in a retreat and would be back this week. In October 2020, Soroti resident judge Wilson Musalu Musene returned the file to the deputy registrar for “administrative action.”

He said lawyers from Alliance Advocates had never filed any submissions yet they demanded an expeditious trial.

“You have never filed any submissions as directed and neither is there any reply from the respondents. So there is nothing for me to handle as of now. And I am not dying to handle the case as I have too much work on my table,” Musalu said.