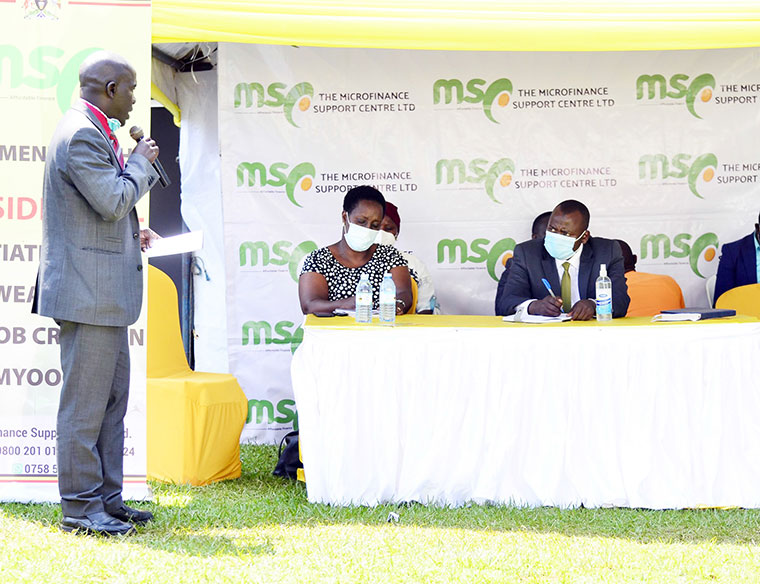 Members of parliament have called for an increased support to the Emyooga programme in order to empower communities live a sustainable life.

The recommendation is the highlight of an aggregated report from various sub-regional reports of MPs, writes MOSES MUGALU.

Emyooga is a Shs 260bn presidential initiative programme on wealth and job creation that is geared towards transforming Ugandans through savings.

The objective is to create development through promoting access to and usage of financial services and mostly targeting the financially excluded Ugandans. President Museveni launched it in August 2019 as part of the government effort to improve household incomes.

Last August, members of parliament took a two-week break to find out how the Emyooga funds were utilised in their constituencies. Under their dif- ferent caucuses, the MPs made reports providing successes, challenges and recommendations for the sustainability of the Emyooga programme.

The programme is currently implemented by the Microfinance Support Centre (MSC) in conjunction with The District Emyooga Taskforces that are set up in each district and chaired by the resident district commissioners/ resident city commissioners.

“We underscore the importance of wealth and job creation through the Emyooga programme. It is capable of improving the access of funding and capital in the citizenry. It is the agreed position that Emyooga programme be supported with more funding; ensure proper sensitization and requisite modifications to achieve the intended objectives. This initiative has potential to create wealth and improve household incomes of Ugandans if the challenges are addressed and realignment done,” reads the report.

In Kigezi, MSC released funds amounting to Shs 8.4bn to all the 270 registered Saccos, which improved financial literacy skills among beneficiaries.

“Through various trainings conducted by the combined team of the district taskforce and MSC, the SACCO members gained knowledge and skills in the areas of savings and share capital mobilization, investment loan management and record-keeping and governance. In Rukungiri, 324 SACCO leaders from 54 SACCOs were trained according to the Cooperatives Act and regulations,” noted Dr Nicholas Kamara, the Kabale municipality MP who led the Kigezi sub-region team.

“In Bugisu, the Emyooga initiative was welcomed by the populace. It appeals to the common person by increased access to financial services. It was well received as an opportunity for wealth creation and an attempt to improve household income. In Bulambuli, 2,083 groups had registered across the district and got certificates. In Manafwa, the produce dealers SACCO alone had 90 associations,” notes the sub-report.

Meanwhile in Karamoja, Emyooga has strengthened the saving culture in some districts.

“In Adjumani, the saving rate exceeded the mandatory saving cap of 30 per cent. The saving percentage rate was established at 34.4 per cent. It was also noted in Ankole that loan recoveries across board have been successful.

“This being a revolving fund, loan recoveries are being realized. For example, in Mbarara Municipality, it was established that the Boda Boda Sacco is doing well on loan recoveries. In Ntungamo municipality, the Women Entrepreneurs SACCO had recovered Shs 5,096,500 by mid-August and saved Shs 21,797,619.”

In Busoga, there is improved financial inclusion through increased number of Saccos in a short time. “Citizens were sensitized about the need to belong to an association. Kamuli has 30 Saccos, 566 associations and 11,541 individual members.”

In Buganda, it was noted that monitoring needs more funding. The overall monitoring of the Emyooga was assigned to the resident district commissioners and the district commercial officer.

“We have observed that the RDCs and the DCO are not funded to effectively monitor, evaluate and audit all beneficiaries and disbursement of funds. Specifically, the DCOs and the parish commercial officers lack motorcycles or vehicles to supervise the initiative within their areas of jurisdiction. Additionally, due to geographical challenges of hard-to-reach areas such as Kalangala, it was hard to monitor beneficiaries of Emyooga residing on different islands,” reads the report.

Meanwhile, in Acholi sub-region, it was noted that there are delays in monthly facilitation allowances for the district teams that do trainings. In general, it was noted that effects of Covid-19 and lockdown ravaged the Emyooga SACCOs because associations were unable to congregate for trainings and use the funds for wealth creation.

What’s more, some of the benefi- ciaries that received the money before lockdown used it for survival. During the lockdown, some businesses like salon operations, markets, fish mongers and mechanics have been affected and some of the start-up businesses have closed.

In all, the underlying challenge was that the seed capital grant was inadequate to cater for all the registered members. In Kabale municipality, the produce dealers comprised of 90 associations was allotted Shs 30 million which was a drop in the acean. This challenge was cross-cutting in the entire Kigezi sub-region.

The most conspicuous recommenda- tion is the need for more funding of Emyooga SACCOs with additional seed capital and a fair distribution of capital according to the associations in each group.

The aggregated report further calls for overhauling of the top-bottom approach because it does not allow communities to participate in identifying their problems so that the solutions could be meaningful and owned. Meanwhile, volunteerism in running of the SACCOs has been criticised because many executive members have no specialized skills.

“It is our considered recommendation that SACCOs should be empowered with technical personnel for efficiency and proper governance.”

In Acholi, it is recommended that SACCOs should be given operational funds to run their day-to-day activities.

A total of Shs 54.3bn savings have so far been saved by different Emyooga Saccos since the program was launched in 2019, thereby increasing the capacity of Emyooga Saccos to extend low-interest credit services to their members.

The qualifying Emyooga Saccos continue to be served as and when they submit their verified requests through the Emyooga chairperson of the district taskforce who is either the resident district commissioner or residential city commissioner,” he said.

The programme targets Ugandans engaged in specific and similar specialised enterprises in the informal sector who come together in form of Saccos under 18 categories. These categories include boda boda Saccos, women entrepreneurs Saccos. carpenters | Saccos, salon operators Saccos and taxi operators Saccos.

+1 #1 Lakwena 2022-01-12 14:19
In other words, anything coming from a Professional conjurer (conman) like Gen Tibuhaburwa is fake, hence unsustainable (propaganda value).

E.g., before Emyooga's results are visible another unsustainable programme called Parish Model (a communist model proposal) has been put on the table.