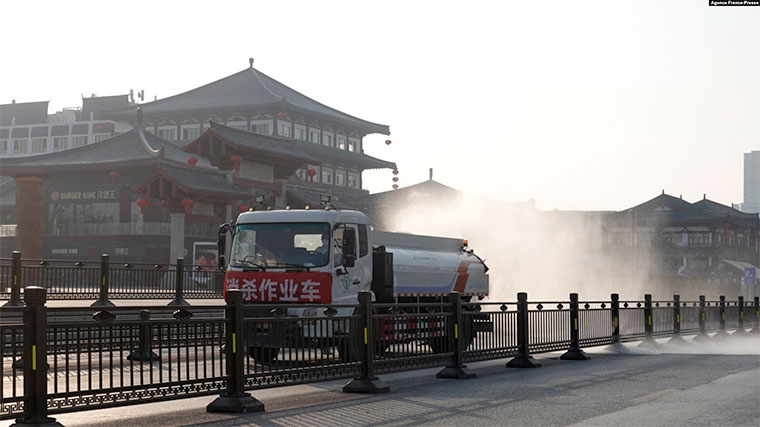 A truck sprays disinfectant on street in Xi'an in China's northern Shaanxi province,

A third Chinese city has locked down its residents because of a COVID-19 outbreak, raising the number confined to their homes in China to about 20 million people.

It wasn’t clear how long the lockdown of Anyang, home to 5.5 million people, would last. Mass testing was being enforced, standard procedure whenever outbreaks pop up around the country.

Another 13 million people are locked down in the city of Xi’an and 1.1 million in Yuzhou, with restrictions imposed on the port city of Tianjin, only about an hour from Beijing, which is to host the Winter Olympics from February 4.

A games official responsible for disease control, Huang Chun, said organizers are counting on the cooperation of athletes and officials to prevent an outbreak that could affect participation.

“If the mass cluster transmission happens, it will impact the games and the schedule for sure,” Huang said. “The worst scenario, if it happens, is independent of man’s will, so we leave our options open.”

Hong Kong also announced the closure of kindergartens and primary schools after infections were reported in students. Schools are to close by Friday and remain shut until at least the Lunar New Year holiday in the first week of February.

Hong Kong has tightened pandemic-related restrictions in recent days after discovering the omicron variant had spread beyond people arriving from overseas.

The lockdown of Anyang followed the confirmation of two cases of omicron on Monday that are believed to be linked to two other cases found Saturday in Tianjin. It appears to be the first time omicron has spread in mainland China beyond people who arrived from abroad and their immediate contacts.

Residents are not allowed to leave their homes, non-essential vehicles are banned from streets and stores have been ordered shut except for those selling necessities, according to a city notice shared by state media late Monday.

Xi’an and Yuzhou are both battling the delta variant and neither has reported any omicron cases. About 2,000 people have been infected in Xi’an, an ancient capital that is home to the Terracotta Warrior ruins and major companies in computer chips and aerospace, in China’s largest outbreak in recent months.

This is more so as scientists aren't politicians, don't cant to control China, but MUST help the world by knowing what/how Covid-19 came to life, if the world is to finally know how to stop it!

How can China that wants to control the world, shut doors to world scientists?

As Covid-19 is master & changes as & when it deems right, why is the world continuing to let Chinese companies exploit their land riches, when China doesn't care about "life"?

2 years of fear of unknown Covid-19, with situation getting worse should bring the world TOGETHER, as the virus has no bounderies, no borders, is adopting to air/temperatures!

Not even vaccines will save the world already suffocating with masks, restrictions & some are already on third jab!...
Report to administrator
-2 #2 Akot 2022-01-11 16:07
...Covid-19 is like Museveni; free to change looks, way they talk/behave, where they go, scare, kill, oppress!

If scientists could develop vaccines without knowing what Covid-19 is/how it came to life within months, how won't they be able to get rid of it if they work right from the virus' birth place?

The world gives visa to Chinese, but do they do so to Covid-19?

This means China has no right to stop world scientists from working right from the birth place of Covid-19, right?
Report to administrator