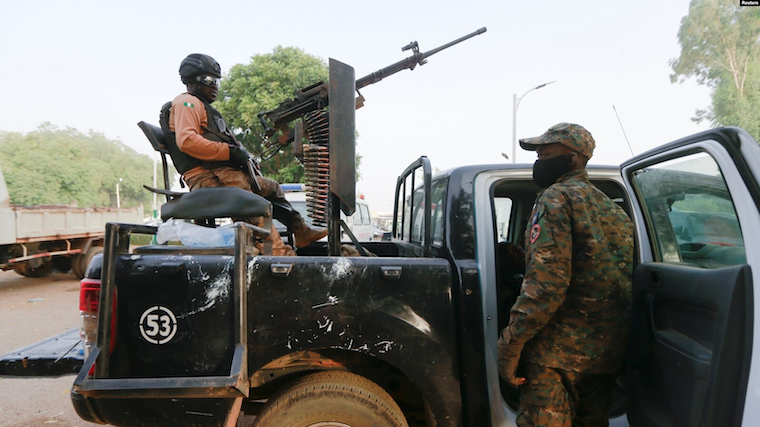 FILE - A soldier sits on one of the trucks in the northwest Nigerian state of Zamfara, Nigeria

Nigerian authorities on Sunday said the death toll from attacks by armed groups in northwest Zamfara State last week has risen to more than 200.

The attacks which began Tuesday lasted until Thursday across nine villages. Authorities say many more villagers remain unaccounted for. Zamfara state residents say the attacks were retaliation for an earlier military raid against the bandits.

Military airstrikes last Monday around the armed men’s hideout in the Gusami forest hideout as well as in Tamre village in Zamfara reportedly killed more than 100 bandits, including two of their leaders.

Large numbers of angry motorcycle-riding bandits hit back at local communities in reprisal for days, shooting people on sight and burning down houses.

Last week's attacks are among the deadliest seen in the region in years. Authorities say up to 10,000 people were displaced and too afraid to return to their homes.

On Saturday, Nigerian President Muhammadu Buhari said in a statement, “The latest attacks on innocent people by the bandits is an act of desperation by mass murderers, now under relentless pressure from our military forces.”

"One of the key bandits by the name Bello Turji, wrote a letter last month where he indicated his willingness to [as it were] end what he's doing. The letter was very clear," said Adamu.

Zamfara state police spokesperson Shehu Mohammed said authorities were gathering intelligence on the attacks from the villages and victims and would aid future operations.

"The information we got will surely assist the security agencies in trying to record more successes in subsequent operations," he said.

Northwest and north-central Nigeria are recording spikes in attacks on communities, looting and mass kidnappings for ransom that began in late 2020. The government has repeatedly promised to address the issue.

0 #1 kabayekka 2022-01-11 03:33
That is why it is rightly suggested that the international arms dealers must be stopped in their trucks over their lucrative business of trading armament to the whole continent of Africa.

Such human slaughter is the result of armed bandits and their governments accumulating lots of foreign currency and buying all sorts of arms as if there is no tomorrow.

And if they fail to succeed to capture power, or the governments fail to retain power, they all turn these guns on their own helpless and unarmed civilian populations.
Report to administrator