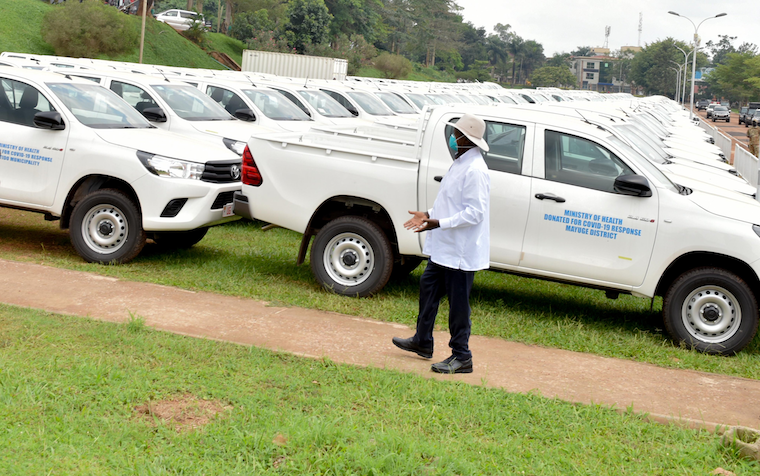 The Inspectorate of Government (IG) is yet to identify the officer who authorized two COVID-19 surveillance trucks from the Health ministry to transport private building materials from Kampala to Kyegegwa district.

Last month, the Inspectorate impounded the two trucks registration numbers UG 6495M and UG 6646M loaded with construction materials believed to be for a high-ranking Health ministry official. The incident sparked public rage as the misuse of government vehicles continues to be rampant in the Health ministry.

The trucks were driven back to Kampala and are currently parked at the IG premises pending conclusive investigations. Munira Ali, the IG spokesperson said investigations into the matter are still ongoing to ascertain the individuals behind the issuance of movement permits to the trucks to engage in private work.

Health ministry spokesman Emmanuel Ainebyoona confirmed that indeed the IG impounded their trucks, saying the matter was being addressed internally.

Some vehicles belonging to the ministry have in the past been intercepted for contravening the 2010 public service standing orders on regulations regarding the use and care of government vehicles issued by the ministry of Public Service.

In March 2019, police impounded an ambulance registration number UG 3605M ferrying bricks in Omoro district. In February 2015, police in Kampala impounded a GX Toyota Landcruiser, registration number UG 3673M belonging to the ministry of Health accounts department after it was found being loaded with fresh elephant grass near Lubigi wetland, along the Northern bypass.

On July 16, 2007, an ambulance, registration number UG 2231M attached to Amach health centre IV was intercepted loaded with bricks in transit to a construction site in Abako sub-county, about 40 kilometres east of then Lira Municipality.

0 #1 Lakwena 2022-01-10 17:07
Right from Gen Tibuhaburwa to the lowest useful idiot in this country; the vice of abuse of power, office and public properties (corruption), have their root causes in the blind extravagance, love for money and power (PLUNDER) as ends in themselves.

Otherwise, concerned Ugandans have never seen Tibuhaburwa'a famous TUMPECO Enamel ware for his Bushera Mug, nor his Bed (Mazongotto) from Kubiri in Wandegeya, which he told Makerere Unniversity student; that the above, would be his class of domestic ware and/or furniture.

In other words, the abusers of power, offices and public properties, are the ones; who dubiously and religiously tell the honest and hardworking Ugandans to be FRUGAL and PATRIOTIC.