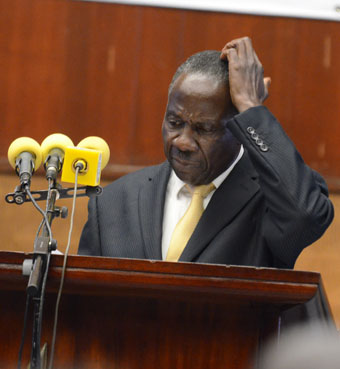 Uganda’s public debt has risen to Shs 73.8 trillion (about $20.8 billion), according to provisional figures from the Bank of Uganda up to the month of October 2021.

By the end of June 2021, ministry of Finance, Planning, and Economic Development reported that the debt had gone up by more than a quarter to Shs 69 trillion ($19.5 billion) over the previous year. Now, the increase from the end of June to October last year was mainly attributed to the 5.9 trillion-shilling debt that the government acquired from the domestic market.

This means that currently, for every one Ugandan, the government debt amounts to Shs 1.53 million, based on today’s population estimates by global demographic centres. Macrotrends.net and Worldometers.info put Uganda’s population at 48 million as of Thursday.

The ministry attributes this sharp rise in the national debt stock to the Covid-19 crisis, which it says, has exacerbated Uganda’s fiscal position and development needs.

The increase in disbursed external debt was largely due to increased budget support inflows from multilateral creditors.  These were particularly the World Bank’s International Development Association, whose total outstanding debt to Uganda is now $4.5 billion, and the African Development Fund (ADF), as well as project support inflows mainly from the African Export-Import Bank.

China remains the biggest bilateral (country) lender to Uganda with her debt now amounting to $2.55 billion followed by Japan and the United Kingdom. Afreximbank, Stanbic, and Standard Chartered bank are the country’s top private creditors to the government.

While the official figures show the total debt to GDP ratio slightly below the 50 per cent threshold, analysts say it does not give the entire picture. The Uganda Debt Network (UDN) says the statistics only show debt acquired mainly through loan requests, leaving out other government financial obligations, like legal fines and penalties, compensations, and other commitments, which, they say takes the ratio beyond the 50 per cent mark.

UDN also warns that the burden is not only increasing through more loans but the rising cost of finance too.

“The average interest rate on external debt increased to 1.4 per cent in 2020 from 0.8 per cent previously mainly as low-cost term loans reduce alongside a reduction in the grant element in the new loans. The average repayment period is also reducing,” says UDN in a statement.

The lobby group stresses the need to focus on domestic revenue mobilization through widening the tax base, using digital technology to raise collection levels and closing leakages, and redirecting public spending to better priorities. The ministry of Finance maintains that Uganda’s debt is quite sustainable and is among the safest in the region.

“Some people have portrayed a picture that Uganda has over-borrowed. That’s not true. Our Debt-to-GDP ratio is among one of in the region, but we want to keep it within our chatter of physical responsibility which we have already gotten through parliament,” says Ramathan Ggoobi, permanent secretary at the ministry of Finance.

Ggoobi says that they will go for more concessional loans. “We are going to borrow largely concessional or longer-dated commercial in order to reduce the refinancing risk,” he says.

In his statement on the commencement of the 2022/23 budget process, Finance minister Matiya Kasaija partly blamed the rise in debt on the frequent supplementary budgets, some of which, he said, could be avoided.

“How do you bring a supplementary budget request for an international conference which you have expected to host for two years?” he wondered.

- The country has been mortgaged.

- Ugandans of three generations to come have to be
taxed a lot to pay the debt. They will be slaves.

Already Ugandans are slaves because they have to
pay huge taxes so that money is put in Ministries for
them to steal.

- That is why the Ministry of Education has to be in
first family,it is number three in the budget
allocation.

- Being a slave means you work for your master.

Many Ugandans can hardly survive but continue to
pay VAT and other taxes leaving them empty
handed.

Yet, Ugandans are at peace maintaining the tribalistic system that disepmowers them, but ensures Museveni's lifetime rule & family business through fake presidential & parlkiamentary elections!
Report to administrator
0 #12 Akot 2022-01-09 18:21
Lakwena, thanks, but,

It's Ugandans who have cursed themselves by making & ensuring Museveni enslaves them!

Not 1 triba has the leadership to FREE his people while all ensure tribal division, thus Museveni's ownership of Uganda!

But the poor, sick without healthcare, young without chance to educateion/jobs, those who want to develop Uganda...can UNITE & come out to block Museveni, army/police, tribal leaders, ministers, mps!

But Ugandans are just waiting for next fake presidential & parliamentary elections to ensure Museveni rules for life & family heritage!

Even Acholi are waiting for Museveni to treat them as humans!

It is not a question of China lending heftly to this rotten group of thieves claiming to be leaders.

Chine knows quite well that whatever the country borrows ends up in the pockets of these bastards who in the end, take the whole sum to be banked China.

In the end, the Chinese feel happy because they will gain twice: from what Ugandans will pay back to them as refund and, what they will take away freely from the accounts of our thieves ...

Thanks Zaitun for spilling out your gut in frustration.

Because most Ugandans are ignorant and naive about how insidious Communism is: in 36 years and through his Chinese Agents of plunder, Ugandans allowed a self-confessed communist, heartless Tibuhaburwa to dig in and plant his criminally minded tentacles everywhere.
Report to administrator
0 #14 Lakwena 2022-01-10 10:15
To achieve their concealed Communist ideological, political and economic imperialism, the Chinese are taking the Ofwono Opondo of this country/continent for a regular 3-month thorough refresher Brainwashing; into becoming vicious Neo Chinese (Maoist) parroting Zombies.

In other words, we (Africa) are a sell out. E.g., the AU Headquarter in Addis Ababa, our State House and Foreign Affairs Ministry, are made in China (by Chinese). Symbolically; what does that tell any right thinking self-respecting African/Ugandan?
Report to administrator
12