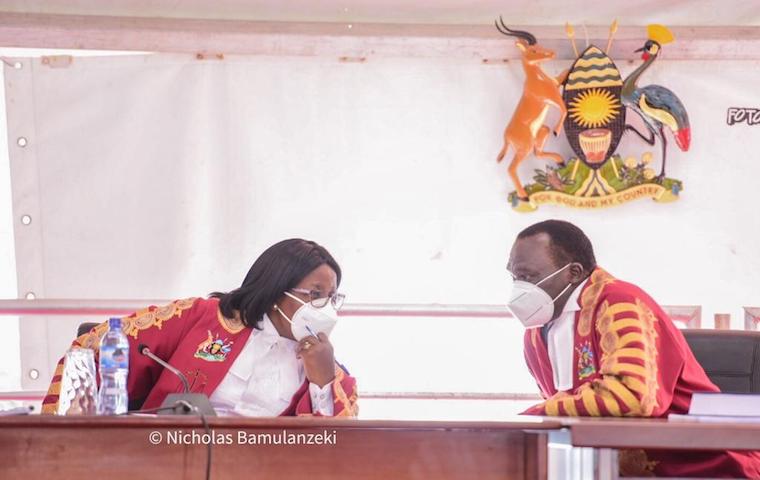 Judiciary says there is a shortage of judges

The Criminal Investigations Directorate (CID) has blamed the judiciary for causing unnecessary delays in the trial of several cases despite overwhelming evidence sent to court.

Charles Twiine the CID spokesperson, said over the years they have noticed that many cases whose evidence was fully gathered even before they went to court have not been heard to conclusion and keep piling.

Twiine says in cases like that of Magara and Nagirinya, detectives gathered all the necessary evidence, even before the files were sanctioned by the Office of the Directorate of Public Prosecution (ODPP) for trial.

Irene Nakimbugwe, the deputy spokesperson Directorate of Public Prosecution (DPP), agrees with the CID that indeed the evidence was collected, suspects charged and remanded but the judiciary failed to fix dates for trial or hearing of cases.

“It is true the files are there. It is true they collected the evidence. Their files have been there in our custody. It is not us to list those cases for trial. When police collect the evidence, we look through it and confirm. But for them to have a trial date, it is the judiciary. When they claim they don’t have money to do that is how years go by,” Nakimbugwe said.

CID records show by the end of 2020, 36,881 cases were pending while the year 2019 ended with 40,085 cases still pending in court. In response to Twiine and Nakimbugwe, judiciary spokesperson, James Karemani, said the two institutions know why cases take long to be concluded despite the satisfying evidence.

Karemani reechoed cries of insufficient funding, few judges, and magistrates. He added that in the current state, one judge handles cases supposed to be handled by at least five judges. Karemani agreed that thousands of cases have been delayed in court yet they have satisfying evidence.

When cases delay being heard, according to Twiine and Nakimbugwe, it risks registering a successful prosecution because sometimes witnesses died. Karemani said people should know that it’s not easy for 68 judges to deliver justice to 45 million Ugandans.

+1 #1 rubangakene 2022-01-07 19:36
Remember the other week the judiciary were dancing and partying, patting each others' back and doling out achievement plaques!

Now the CID has 'outed' them for the fiasco in the department. Meanwhile the Minister of Justice was in flowing gowns receiving a "Doctorate" for some sort of innovative feat in the department. Do they really think Ugandans are stupid or what?
Report to administrator
+1 #2 Apollo 2022-01-08 12:46
This colonial burden called Judiciary had denied the entire Country Justice.

It Is a failed institution. Many have gone to their graves with dashed hopes and crusshed faith in a 'dead' institution.

How can a Country that graduates more than 700 Legal officers every year, have only 68 Judges?

Why do Judges live on Mars but breathe earthly oxygen? Where is the Judiciary Information Management Systems? where are the policy and structhral changes?

I have interest in a case where 7 of 9 witnesses are now dead while the case is dragging.
Report to administrator
-1 #3 Lakwena 2022-01-09 12:00
Especially if one is poor in this country; as we live, fall sick/ill and/or die at own risk; I always tell whoever cares to listen that: in Uganda you get into trouble with the law at your own risk!

In other words, because of what go therein (indifference), for me; the most dreadful and frightening places to go/be in Uganda are: the Police, Courts and Hospitals. I am bewildered by these places.
Report to administrator
0 #4 Wainanchi 2022-01-11 06:16
@ Lakwena...Thug you are back!!!
I was hundred percent sure that you were killed as ADF terrorist in Congo jungles.!!

And I see you are still breathing and kicking
Why don't you go to the Bush to fight for your sick ideas and to die for them but cowardly hide and spit poison like cobra snake.

I wish you will be caught and eliminated one day,sooner or later.