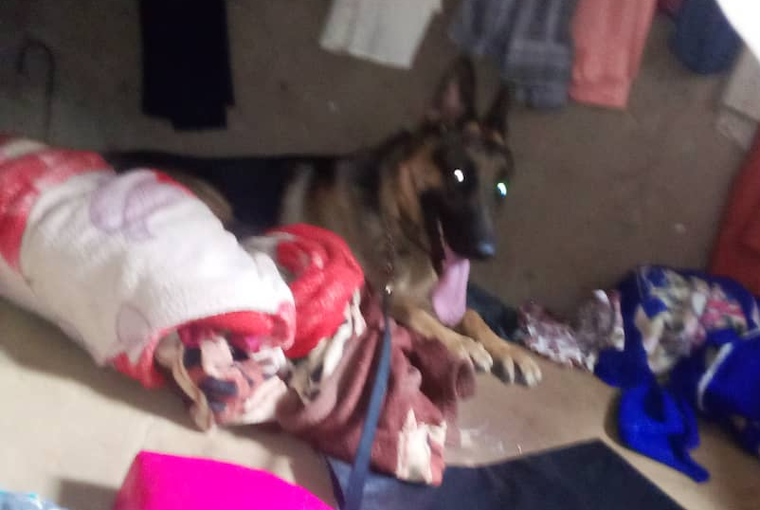 The sniffer dog inside Kaziba's house

Police in Bugiri is holding Eliazari Kasiba, a resident of Butambala West, Eastern division, for the theft of household items including a sofa set, mattress and music woofer, among others.

Kasiba was arrested Thursday after Muhammad Mwanyala reported a burglary and theft at his house the previous night.

When police arrived at the scene, a sniffer dog was deployed to track the scent and trail of the items and after two kilometres, it stopped at Kasiba’s house. Upon making a search inside, police recovered the stolen items and arrested Kasiba for burglary

According to Rogers Namanyiira, the police constable who handled the sniffer dog, they were able to recover all items intact and Kasiba will be arraigned in court to face the charges.

+6 #1 Zaitun 2022-01-07 16:42
Only if Uganda Police could use sniffer dogs to recover all what the prominent thieves of the country are stealing, including the billions of dollars they are keeping in safe custody outside the country!!!

What a disgrace for the police not to arrest the prominent thieves destroying the country but small village thieves!!!
Report to administrator
-2 #2 Wainanchi 2022-01-08 12:42
Bravo canine unit!!

Thieves and criminals.Beware!!! You will be found and arrested and put behind bars.

Bravo canine unit!!
Bravo caregous police sniffer dogs which is doing excellent job.
Thieves and criminals.Beware!!! You will be found and arrested and put behind bars.
Happy New Year Police!!!

Yes you, your uncle and family will be the first to get arrested when change comes.

After all, your office is not far from his, but in the same building!

Even if you happen to run into exile, we shall use all the Diplomatic means to get you guys for what you have done to Ugandans.
A word is enough for a wise man!
Report to administrator
-1 #4 Wainanchi 2022-01-09 05:21
Hshahah thieves!!! You are scared and ticking minuses to.my comments meaning I was right as always

Dare to steal, these clever dogs will catch you and laugh like this one poking his big tongue out and laughing at the trophy he discovered

Not only thieves but any terrorist or killer will be found and arrested and Uganda will be very very safe country to live in
Bravooooo police dogs.Police give them extra meal and rewards they like to thank them
Look at this beatilf animal

Who whips not love it?.?
Thank you police canine unit
You rock!!
Report to administrator