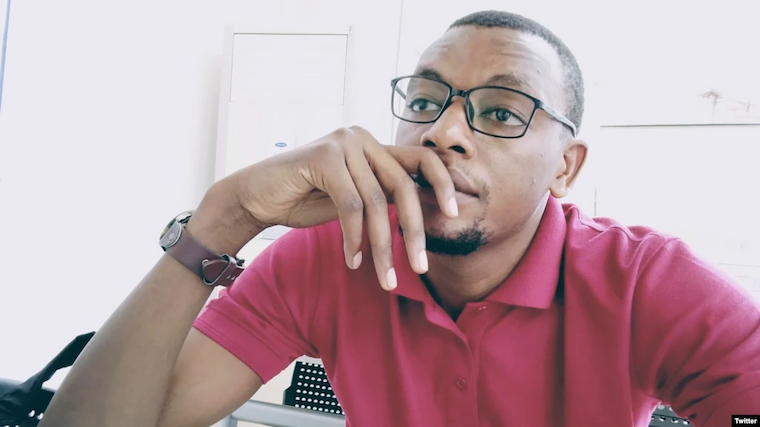 Writers and poets have condemned the arrest of award-winning Ugandan author Kakwenza Rukirabashaija, who is being held without charge for alleged offensive communication. Security forces arrested him earlier on Tuesday this week after Kakwenza criticized the government.

“If anyone thinks it comes up as abuse or as insult, then charges need to be placed and they take him to face the law. I think our biggest concern as the writing community is the manner in which he is arrested and no charges are placed and he’s been in detention,” Sekajja said.

Kakwenza’s lawyer Eron Kiiza says the author is being held at a hidden interrogation facility in Kampala.

Kakwenza on Twitter called Muhoozi, obese, drunk, bad-tempered, and a rotting corpse of a future president. Muhoozi is seen as being prepped to succeed his father in Uganda’s 2026 election. Kakwenza, a 2021 PEN Prize winner for international writer of courage, posted about his arrest Tuesday on Facebook.

“Men with guns are breaking my door,” he wrote. “They say they are policemen but are not in uniform. I’ve locked myself inside.”

Makerere University professor and writer Stella Nyanzi says the author’s arrest shows Muhoozi is just as intolerant of critics as his parents.

“The face of the enemy has changed. It is the first time that the first son is engaging in this sort of brutal arrest that we have known his father and mother to make on writers. It's not an accident that Kakwenza writes as he does. It is of worry to be isolated,” she said.

Nyanzi herself was jailed in 2019 for writing sexually explicit criticism of Uganda’s first lady Janet Museveni. PEN International on Twitter condemned what it called Kakwenza’s “violent, unlawful arrest,” calling for his immediate release and expressing grave concern about his safety.

Ugandan security forces in 2020 detained and tortured Kakwenza, he said, for his book The Greedy Barbarian, which describes high level corruption in a fictional country.

He was arrested a second time after he wrote the book Banana Republic, which detailed his alleged torture at the hands of military intelligence. Uganda police spokesperson declined to comment on Kakwenza’s latest arrest, saying he was too busy to take calls.

Yet they now persecute Not Prosecute Kakwenza for allegedly doing seemingly the same thing. Its only the dim witted who hallucinate MBU ALL PEOPLE ARE EQUAL
Report to administrator