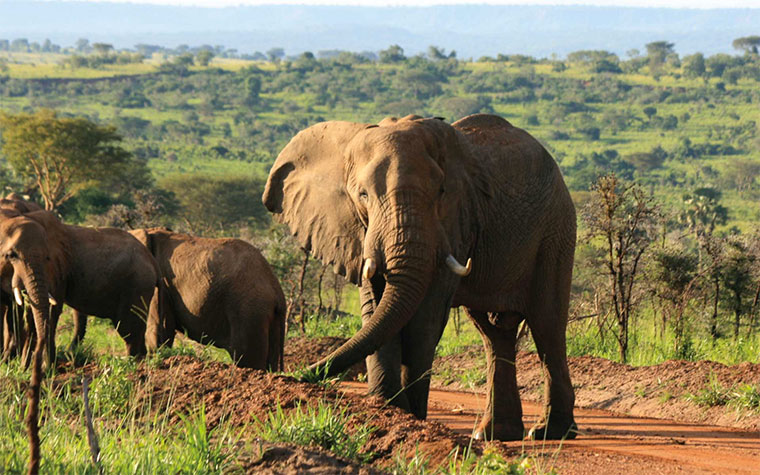 The elephants reportedly ate food items together with the money

Albino Ocan, the head of the family that lost the money, says that they had kept the money in a granary together with food items. He says at least Shs 5m was savings made from the sale of products such as sesame (sim-sim), millet, and sunflower and was intended to pay for the dowry of his daughter-in-law, while Shs 2.3 million belonged to one of his sons who had sold his sunflower harvest and requested his mother to keep for him the money.

Ocan says his wife had kept the money in a granary, but when the elephants invaded their home, they overturned the granary and ate all the foodstuff plus the money. He says that they opted to keep the money at home because the nearest bank is located about 60 kilometers away.

"We have given our position very clearly to these people that beyond three days, people will take law into their hands. Not that am inciting our people against Uganda Wildlife Authority or against the government of Uganda, but I want to make it very clear that the life of our people is much more important than the lives of those elephants. If you cannot withdraw those animals or drive them away from our community and yet you don’t have anything to do to our people, now, should we allow your animals to live that at the expense of our people? I think on humanitarian grounds, human beings must be valued than the elephants," said Olweny.

Sarah Aber, Kitgum secretary for production and marketing in Kitgum district blamed the game rangers for the elephant invasions in the area. According to Aber, the game rangers spend more time in leisure than performing their duties.

"We’re supposed to guide them, tell them what they should do and the first thing is we don’t want elephants to be here, here, is not a park. We want you to go and inform your bosses to plan and remove all the elephants from the community. Even women are fearing to go and fetch water because any time they can be attacked on the way. Why do you keep bringing these people here, these rangers? Tell them what they are supposed to do here - some are in wrong jobs. They are doing nothing, just enjoying staying in the centre, drinking and even spoiling our young girls instead of looking after their animals. Tell your bosses that we have got information as a district that the rangers you have sent are doing nothing," said Aber.

William Komakech, the Kitgum resident district commissioner, revealed that he has received several complaints from the communities around Kidepo national game park about the persistent invasions of stray elephants. Komakech pledged to ensure that the family that lost money in the attack is compensated.

"It is a concern and we really regret what has happened but we also know this is like a surprise attack on the government because the elephants came in large numbers and scattered into many sub-counties which used not to be like that," Komakech.

Reports indicate that for the past six months, an estimated 70 stray elephants from the conservation area have been roaming the district, destroying crop gardens, stored foodstuffs, and causing scare and sleepless nights among the community. The most affected sub-counties include; Orom, Kiteny, Orom East, Namokora all in Chua East Constituency in Kitgum district.

Samuel Amanya, the chief warden at Kidepo national game park regretted the destruction made by the elephants and blamed it on the shortage of game rangers to effectively man the affected areas.